Mixing Benzos and Opiates – A Deadly Combination – Know the Risks 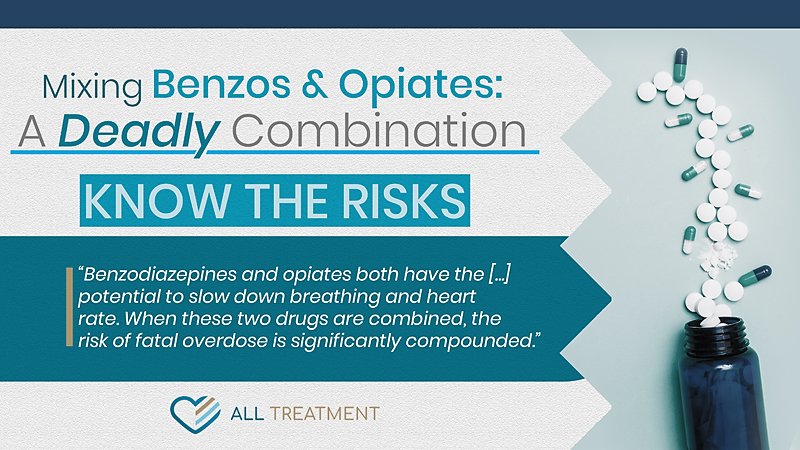 Mixing benzodiazepines (benzos) and opioid painkillers are one of the most common and deadly prescription substance abuse behaviors. The National Institute on Drug Abuse (NIDA) reports that of the more than seventy thousand overdoses that occurred in the United States in 2017, 11,537 involved co-occurring use of opioids and benzos. Deaths from this behavior have increased every year since 1999. If this trend continues, there’s every reason to believe that the record of 2018 opioid deaths will be higher than the previous year.

Benzodiazepines are opioids are two separate powerful families of prescriptions: the former is used to treat anxiety and sleep disorder and the latter is used to treat severe pain. Whether it’s heroin, synthetic opiates like fentanyl, or prescription painkillers like oxycodone or hydrocodone, simultaneous abuse of opiates and benzos can and very often does result in overdose, which can be fatal.

Common Types of Opiates and Benzodiazepines

There are numerous types of opioid painkillers and benzodiazepines of which legitimate pain or anxiety patients can avail themselves in order to get help for their conditions.

Each one of these medications has a high potential for abuse or addiction, and the use of these drugs should only occur under the supervision of an experienced and qualified physician. These drugs should never be used simultaneously, even within a clinical context.

Benzodiazepines and Opiates: a Deadly Combination

Benzodiazepines and opiates both have the very real potential to slow down breathing and heart rate. When these two drugs are combined, the risk of fatal overdose is significantly compounded.

Some of the immediate signs of simultaneous benzo and opioid overdose include, but are not limited to:

A recent study from Stanford University indicates that mixing opiates and benzos significantly increase risk of ER admissions, many of which have ended in a fatality. Some experts actually say that the withdrawal symptoms from benzos are even worse than opioids. It’s common for individuals to start taking benzos to offset the withdrawal symptoms and other residual effects of opioid use, whether it’s taking Xanax to treat anxiety from heroin withdrawal or any other type of interconnected substance abuse behavior.

The Opiate and Benzo Withdrawal Process

While benzos and opioids each have their own distinct set of withdrawal symptoms, combining these two classes of drugs can make the acute withdrawal period significantly more difficult. The physical and psychological effects of mixing these drugs can be debilitating.

Some of the more common withdrawal symptoms of prolonged simultaneous benzo and opioid use include, but are not limited to:

If you or someone you care about is abusing benzos and opiates at the same time and are experiencing these issues, start exploring options for treatment immediately.

Treating Co-Occurring Benzo and Opiate Use

When someone has started abusing opiates and benzos together, they need immediate comprehensive clinical treatment to help them overcome the immediate medical and behavioral health issues associated with the condition. This includes medically supervised detox to help patients overcome their withdrawal symptoms, followed by in-depth behavioral rehab in either an inpatient or residential setting. The reality is that simultaneous abuse of benzos and opiates can result in severe long-term health issues that require ongoing care to treat associated medical issues and even loss of basic cognitive function. Treatment must include interventions to address the individual addictions as well as the role one played in exacerbating the other’s symptoms.

Opiates and benzodiazepines are two of the most commonly used and addictive families of prescription drugs in the United States. Their distinct uses in the treatment of unrelated conditions very often lead users to think that they could take the two drugs at the same time with no residual health effects. Thousands of deaths later, this line of thinking has been overwhelmingly proven false. If you or someone you care about has become ensnared in simultaneous benzo and opiate use, you don’t have to spend another second suffering. There are more resources than ever to help you get the treatment you need. The process starts by visiting your doctor and explaining the situation. They will help guide you toward quality and effective treatment options.

You can also browse our database of treatment facilities in your area. Most people started taking prescription painkillers or benzos to make their lives better and live without pain or anxiety; the cruel irony is that abusing them simultaneously often leads to an increase in both.