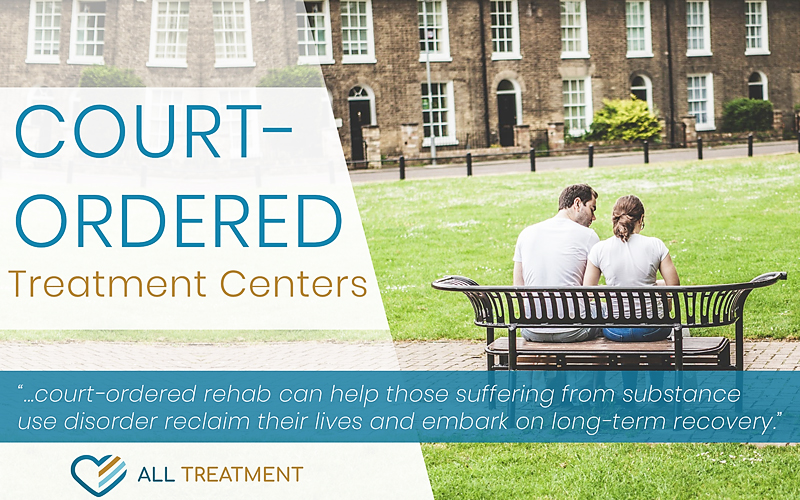 The Federal Bureau of Prisons reports that of the nearly 172,000 inmates in federal prisons, 79,036 (46 percent) are serving time for drug offenses. The Centers for Disease Control and Prevention (CDC) estimates that drug overdoses killed an estimated 66,000 Americans in 2017, the highest of any year to date. Factors like the opioid epidemic and the consistent and pervasive presence of alcoholism among all age groups have created a need for an alternative form of accountability that is more intuitive than traditional incarceration, where offenders simply serve a sentence without getting the help they need. Court-ordered addiction treatment has been fulfilling this need for more and more offenders who move through the American legal system.

What Is Court-Ordered Rehab?

Getting Someone into Court-Ordered Rehab

The judicial entities through which patients enter court-ordered rehab are called drug courts. Drug courts keep nonviolent drug-addicted individuals in treatment for long periods of time and supervise them closely. Clients receive the treatment and other services they require to stay clean and to lead productive lives, but they are also held accountable by a judge for meeting their own obligations to society, themselves, and their families. There are nearly three-thousand drug courts in the United States, and that number is expected to grow as the model gains more and more traction in the American judicial system.

Some of the primary candidates for court-ordered rehab include:

Courts can also order rehab for offenses like theft of prescription drugs from pharmacies or medical facilities, child endangerment, domestic violence, and more. The process of getting your loved one into court-ordered rehab can be difficult and uncomfortable, as it often requires you to turn them into the authorities for drug- or alcohol-related offenses. Under some circumstances, it’s also possible to have someone involuntarily committed to a rehab center if their situation warrants such action.

Who Pays for Court-Ordered Rehab?

While it’s generally incumbent on the offender to pay for court-ordered rehab as part of their sentence, an increasing number of states offer resources to help offenders offset the cost of this often expensive treatment. Ohio and Kentucky, for example, have passed Casey’s Law, which says that anyone petitioning for an offender to get court-ordered rehab must sign an agreement to pay the expense. Indiana passed similar legislation, known as The Jennifer Act. Both of these laws pertain to involuntary civil commitment. In many cases, offenders’ health insurance can also pay for court-ordered rehab, thanks in large part to the Mental Health Parity and Addiction Equity Act, passed in 2008.

According to the National Institute on Drug Abuse, most data suggest that outcomes for those who are legally pressured to enter treatment are as good as or better than outcomes for those who entered treatment without legal pressure. Individuals who face legal pressure also tend to have higher attendance rates and remain in treatment for longer periods, which can also have a positive impact on treatment outcomes. A recent study conducted by the same organization revealed that those who received mandated treatment were, moreover, ten times more likely to complete treatment compared to those who entered a treatment program voluntarily.

While an initially uncomfortable and potentially life-changing proposition, court-ordered rehab can help those suffering from substance use disorder reclaim their lives and embark on long-term recovery. Addiction renders victims unable to think clearly and engage in healthy decision-making; court-ordered rehab programs may help to jumpstart the treatment and recovery processes.