Alcohol and Drug Rehab for the Asian Population 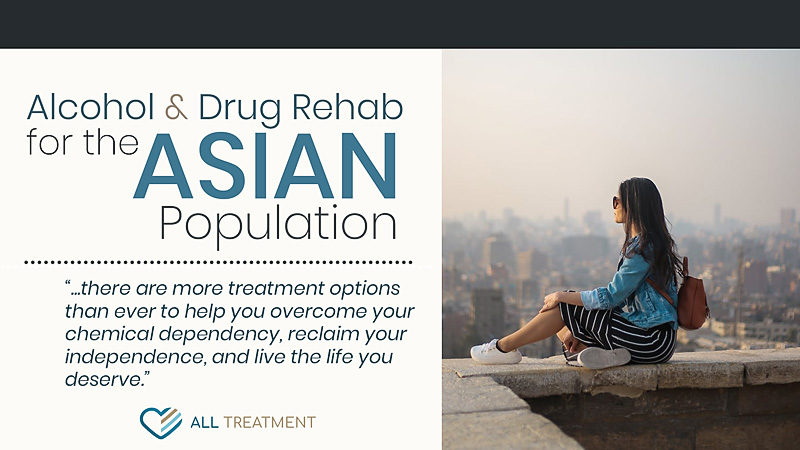 The Asian population in the United States faces a unique and specialized set of circumstances that render them vulnerable to substance use disorder (SUD). Asian Americans and Pacific Islanders represent one of the fastest-growing segments of the American population, according to data from UCLA researchers. Thus the American Psychological Association (APA) points to an urgent need to expand the national substance abuse prevention and treatment dialogue to include Asian Americans and Pacific Islanders, citing a commonly held perception of the group as a “model minority” that often obscures the very real issues of substance abuse and mental health those within this population may face.

Therefore, intellectual honesty regarding the ongoing need for alcohol and drug rehab among Asian Americans and Pacific Islanders is one of the first steps to ensuring vulnerable members of this community can access the quality treatment they need.

Prevalence of SUD Among Asian Americans and Pacific Islanders

The United States Census Bureau reports that there are over nineteen million people in the United States who identify as Asian/Pacific Islander, up from eleven million people just fifteen years earlier. Six million live in California, followed by 1.7 million residing in New York. The Substance Abuse and Mental Health Services Administration (SAMHSA) reports that 4.1 percent of Asian Americans and 15.6 percent of Pacific Islanders engaged in past-month drug use. Over 14 percent of the community engages in binge drinking, and the rate of diagnosable SUD is approximately 4.5 percent. Some of the most commonly abused drugs among the Asian American community include prescription opioids and benzodiazepines.

If there is any encouraging news to be gleaned from the macro-SUD picture among Asian Americans, it’s that rates of alcohol and drug use among the population are consistently lower than those of other populations. SAMHSA reports that Asian Americans or Pacific Islanders were less likely than persons of other racial and ethnic groups to need alcohol or illicit drug use treatment (4.9 compared to 9.5 percent).

It’s also true, however, that Asian Americans who needed treatment were far less likely to receive it than were SUD sufferers in other ethnic groups. This group is consistently less likely to seek treatment compared to other populations. Determining the origins of these roadblocks is key to determining what efforts can be made to improve access, outreach, and engagement with vital treatment services to improve recovery outcomes.

Obstacles to Substance Use Treatment Among the Asian American Community

One of the most immediate and isolating roadblocks to drug and alcohol abuse treatment among Asian Americans are cultural factors within the community that shape perception toward treatment. Data from Mental Health America indicates that Asian Americans are more likely to seek help and support from personal networks—including friends, family, and religious communities—before consulting with professionals about their mental health issues. A study from the Institute for Scientific Analysis points to a clear and direct correlation between acculturation and normalization among the Asian American community.

The study measured the responses and behaviors of more than two hundred young Asian American adults in three groups:

While it’s commonly believed that Asian Americans assimilate to American culture more quickly than others, this group also has a deeply held sense of cultural identity that permeates many aspects of their everyday personal lives; the feeling of loss of this identity can trigger serious mental health issues and subsequent drug or alcohol abuse. Prejudice and economic hardship are two more factors that can contribute to self-medication with drugs or alcohol, along with the extremely exacting academic and professional standards and expectations to which many members of this community hold themselves.

On a more logistical and practical level, the Office of the Surgeon General reports nearly one out of two Asian Americans will have difficulty accessing mental health treatment because they do not speak English or cannot find services that meet their language needs, and the United States Census Bureau reports that prior to the passage of the Affordable Care Act, 15 percent of Asian Americans and 18 percent of Pacific Islanders lacked health insurance.

What Should Rehab Drug and Alcohol Rehab for Asian Americans Look Like?

It’s been established that the Asian American community faces distinct cultural and lifestyle circumstances that can lead to and sustain substance abuse. The role of any alcohol or drug rehab organization is to help patients deal with the origins and triggers of their substance use so they can live independently in recovery with an increasingly diminished threat of relapse. The distinct challenge for rehab that addresses the specific needs of this culture is helping them to exist within the family and social structures that may be directly tied to their SUD. This can be accomplished through group therapy, individualized counseling, and supplemental therapies.

After their initial rehab program is completed, the prevailing recommendation is that patients continue to nurture their recovery in ongoing psychotherapy and support group meetings. If necessary, medication-assisted treatment (MAT) can also be an option to prevent opioid relapse.

If you’re one of the millions of Asian Americans that have made your home in the United States, and you’re currently battling SUD, there are more treatment options than ever to help you overcome your chemical dependency, reclaim your independence, and live the life you deserve. Don’t let fear, stigma, or toxic judgment stop you from getting the help you need; recognizing the need for alcohol or drug addiction treatment is not weakness. The sooner you enter treatment, the sooner you can start repairing your family relationships, your career, and your life.