How Much Hydrocodone Will Cause an Overdose 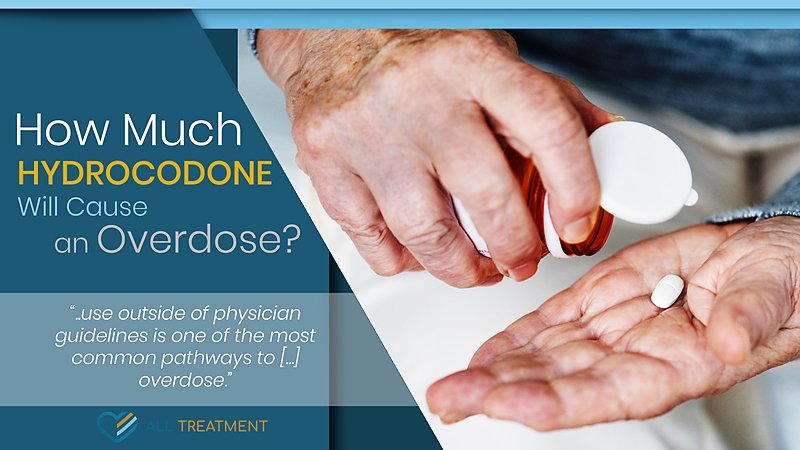 The Centers for Disease Control and Prevention (CDC) reports that hydrocodone is one of the top three opioids linked to overdose deaths. Prescription opioids were responsible for more than a third of all drug overdose deaths in 2017, a number that continues to climb year after year. While Vicodin has been proving to be an effective resource in treating severe pain on a short-term basis, the risks of prolonged use include abuse and addiction that can ultimately lead to death.

An Addictive Danger Right in Your Medicine Cabinet

The legally regulated status of hydrocodone and the fact that it can be procured from a physician’s office has created something of a false narrative that it is less harmful than illicit drugs like heroin, cocaine and pure methamphetamine. The reality is, however, that prolonged and untreated use of hydrocodone and other prescription opioids either leads to overdose or creates a pathway to pure heroin addiction. The Drug Enforcement Administration (DEA) reports that there are several hundred generic and brand name variations of hydrocodone on the market.

Some of the more common brand names of the drug include:

Each one of these medications, along with the several hundred other hydrocodone derivatives that are on the market, contain their own indication and usage guidelines. Patients are encouraged to speak with their prescribing physician regarding exact risks, dosage recommendations and other variables before taking these drugs. Prescribing physicians will be able to ascertain how much hydrocodone is too much based on ongoing evaluation and general experience. The amount of hydrocodone needed to get high is contingent upon biological tolerance, body weight, metabolism and other factors.

Hydrocodone continues to be a uniquely American problem.

Federal rescheduling of hydrocodone products have led to an overall decline in opioid prescribing; however, it remains a serious issue.

Hydrocodone overdose is brought on by an excessive dose of the drug within a short period of time or through increased use of the drug due to tolerance.

Factors and behaviors that could increase the likelihood for overdose include:

These factors can be avoided by strict adherence to physician guidelines and ensuring that you take hydrocodone-only under the close supervision of a qualified doctor or nurse practitioner. Prolonged and untreated abuse will eventually lead to tolerance and subsequent dependence.

How Do I Know If Someone Is on Hydrocodone?

Regular and proper hydrocodone use can be virtually undetectable to the casual observer. It’s only when the user turns to abuse that behavior and physical appearance suffers, and the signs become easier to detect.

Some of the earliest signs of hydrocodone abuse include, but are not limited to:

The physical and behavioral changes of overdose are quite different and more severe than ongoing abuse, and include:

If you or someone you care about is experiencing these symptoms related to hydrocodone abuse, get help immediately to avoid further escalation. When these symptoms are identified, it’s time to get medical help and subsequent addiction treatment.

When a person is in the throes of hydrocodone overdose, the first step is ensuring they get prompt and immediate medical attention. Victims who are still conscious should call 911 immediately or have a loved one drive them to the nearest ER. For loved ones of unconscious overdose victims, the first step is also a call to 911 while trying to revive them with mouth-to-mouth resuscitation and/or chest compressions. A 911 operator will be able to walk inexperienced callers through the process until help arrives and they are taken to a hospital.

Overdose respondents can also call the National Poison Control Center, available at 1-800-222-1222. Narcan (naloxone) has also been incredibly effective in helping respondents revive overdose victims. The drug is available over the counter and training programs are available. Overdose victims who survive their episode should immediately seek detox and rehab to address the physical and psychological fallout of their hydrocodone abuse.

Hydrocodone addiction affects Americans of every age group and gender, including teens and senior citizens. Although rates of prescription and subsequent overdose are on the decline, the problem continues to affect Americans at alarming rates.

If you or someone you care about is battling an addiction to hydrocodone, the time to get help is now. There are more options than ever to help you fight back against this devastating disease, including inpatient and outpatient rehab and medically supervised detoxification to manage physical and psychological withdrawal symptoms.