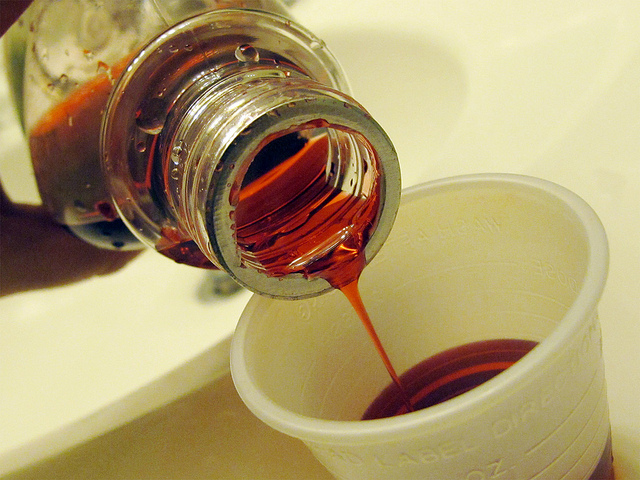 Dextromethorphan, more commonly known as DXM or Robo (as in Robotussin), is a powerful and legal cough suppressant developed in the 1950s by the CIA and US Navy as a non-addictive alternative to codeine. However, when abused or used in doses far above those necessary for medical benefit, DXM can produce a powerful and legal high with effects similar to those of LSD or other psychoactive drugs.

DXM is part of the newest wave of the war on drugs, prescription or drugs available over the counter. It is classified as a dissociative drug, dissociative meaning users often lose touch with reality and can experience feeling or euphoria or "out of body" experiences. Many states are taking measure to try and stop or curb the incidence of DXM abuse only allowing those 18 or older to purchase it and by keeping it behind the counter so someone wanting to purchase it has to ask a pharmacist. These measures however have not stopped the use of this drug from increasing.

DXM is generally a syrup but can be taken in a tablet or pill. Pure DXM is a white powder.

DXM is normally ingested orally but can be snorted if it remains in its pure, powder form.

Though DXM is used by people of all ages, it is most commonly used by adolescents, generally in high school. Statically the most common age of use of DXM being 16 years old. Often believing the drug to be safe because it is legal and inexpensive. DXM also lacks the stigma of abusing illegal drugs and is often easier to explain when found in a child's room or bag. DXM is widely advertised on the Internet and there are many how-to websites that explain the logistics and safest practices when using this drug which also send the message that it is safe.

Use of DXM, first measured by the California Poison Control System in 2006 after the amount of phone calls they received in reference to the drug skyrocketed, shows the abuse of the drug is on the rise. Between 2004 and 2006 calls in reference to DXM increased almost ten fold, however research on this drug is somewhat limited.

Effects of DXM generally come in stages, called plateaus, based on the amount taken and the duration of time spent using the drug or "Robo-tripping".

–First Plateau: At a dosage of 1.5 to 2.5 mg/kg, effects can include a sensation of alertness and other effects similar to stimulants such as restlessness, increased heartbeat, and increased body temperature, an intensified sense of emotions, general euphoria, sometimes in relation to music, altered sense of gravity, loss of balance, and slight intoxication.
–Second Plateau: At 2.5 to 7.5 mg/kg, effects include those of the first plateau as well as choppy sensory input, entering a dreamlike state of consciousness, increasing detachment from outside world, an increased "stoned" feeling, and possibly closed-eye hallucinations
–Third Plateau: At 7.5 to 15.0 mg/kg, effects include flanging of visual effects, difficulty recognizing people or objects, chaotic blindness, dreamlike vision, inability to comprehend language, abstract hallucinations, delayed reaction time, decision making impairment, feelings of peace and quiet, near complete loss of motor coordination, impairment of short term memory, and potentially feelings of rebirth.
–Fourth Plateau: At 15.0 mg/kg or more, user may experience a perceived loss of contact and control with their own body, changes in visual perception, perceptions of contact with "superior, supernatural beings (god or aliens for example), other miscellaneous delusions or out of body experiences, sedentary effects, rapid heart rate, complete blindness, increased hearing, and intensification of third plateau effects.

Long term effects of DXM can include memory loss and permanent sensory impairment although incidents of that are relatively rare. Another danger of DXM is what the drug is mixed with, for example acetaminophen (the active ingredient in tylenol) or when DXM is paired with alcohol, can permanently and severely damage the liver. Many users have reported lasting changes to their personalities as well.

Though possible, the use of DXM rarely results in death. That is not to say that recreational use of the drug is safe as it is often paired with substances that create a deadly combination and it is possible to overdose on DXM. We at AllTreatment strongly advise against the recreational use and abuse of this drug as well as pairing it with alcohol at any time. If you or someone you know is abusing DXM please contact a medical professional or rehab facility in order to receive accurate and professional advice or help.