Racial Disparities in Addiction Treatment – What You Need to Know 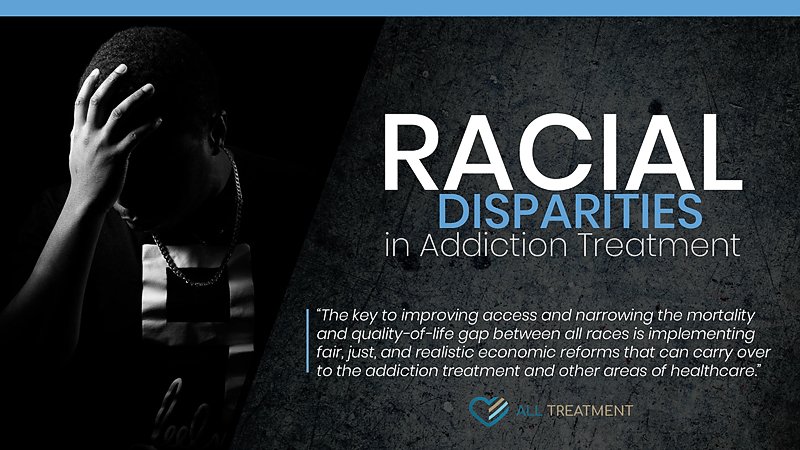 Earlier this month, the University of Michigan published a study in JAMA Psychiatry that put the glaring disparity in access to buprenorphine treatment between the black and white non-Hispanic communities front and center. Among other revelations from the data, it was revealed that white populations are almost thirty-five times more likely to have a buprenorphine-related visit than black Americans. The findings come at a time of already-inflamed racial tensions in virtually every area of society and are the latest in many examples of minorities being on the losing end of the American healthcare system. Examining the systemic barriers that lead to these disparities is key to developing solutions.

Race and opioid fatality have a complicated relationship. When the American opioid epidemic first started to embed itself in the American conversation and national conscience, one of the frequent talking points and commonly reported elements of the story was that heroin was moving out of the country’s urban area’s into white, upper-middle-class neighborhoods. Now that we’re years into the opioid crisis, which claimed approximately 47,600 lives in 2017, the real figures are coming to light: black Americans are succumbing to opioid overdose at increasing rates but don’t have the same access to life-saving care resources like buprenorphine. And while data from the Kaiser Family Foundation does indicate that American opioid overdose kills more white Americans than blacks (78 percent versus 12 percent), there are many areas in which black Americans are overwhelmingly more vulnerable to overdose than white non-Hispanics. Additionally, the Centers for Disease Control and Prevention (CDC) reports that opioid overdose deaths are actually rising faster in the African-American community than among white non-Hispanics.

It’s also true that minorities generally have comparatively limited access to economic mechanisms that can help pay for substance use treatment. Data from the UCLA Fielding School of Public Health indicates that African Americans and people of Hispanic origin had persistently lower insurance coverage rates at all ages. The African American and Hispanic populations have a greater prevalence of trigger events and socioeconomic characteristics that are associated with greater insurance loss and slower insurance gain. Other data indicates the minority communities are more likely to receive low-value healthcare coverage than white non-Hispanics. This is in addition to the inherent economic disparities that make life more difficult for many people of color in the United States.

Data from the aforementioned University of Michigan study indicates that 40 percent of patients who access buprenorphine paid cash and 35 percent rely on private insurance. Only 25 percent of buprenorphine prescriptions written are through Medicaid; only about 5 percent of all American physicians are able to prescribe buprenorphine, and they are able to charge incredible amounts for the drug. In addition to the immediate health risks that minorities’ communities face due to their comparatively limited access to addiction treatment, they also face heightened vulnerability to major long-term quality-of-life issues.

Although black and white Americans use illicit drugs at similar rates, with white Americans using opioids significantly more, black Americans are significantly more likely to experience punitive and heavy prison terms for drug use. Data from the Drug Policy Alliance indicates that prosecutors are twice as likely to pursue a mandatory minimum sentence for black people as for white people charged with the same offense and that one in nine black children has an incarcerated parent, compared to one in twenty-eight Latino children and one in fifty-seven white children. These rates of parental incarceration significantly increase the likelihood of drug use and other legal issues for the children themselves. Disproportionate rates of incarceration have ripple effects in virtually every aspect of life, including the right to vote and participate in the American political process.

Data published in Epidemiology indicates that, while the nature of opioid addiction has crossed cultural barriers to include all races over the past forty years, access to treatment for minority communities—whether it’s buprenorphine, inpatient rehab, detox, or anything else—has not increased with the increasing in morbidity and fatality. Since 1979, the opioid mortality rate has increased twenty-two-fold in the United States.

The reality is that racial disparities in addiction treatment are symptomatic of a larger economic issue. Access to quality healthcare, the ability to pay for buprenorphine and other medication-assisted treatment (MAT) drugs out of pocket, the absence of legal support and healthcare advocacy, and other issues create significant everyday roadblocks to addiction care. The key to improving access and narrowing the mortality and quality-of-life gap between all races is implementing fair, just, and realistic economic reforms that can carry over to the addiction treatment and other areas of healthcare. The good news, however, is that there are more and more resources for minorities to get the help they need for substance use disorder (SUD).