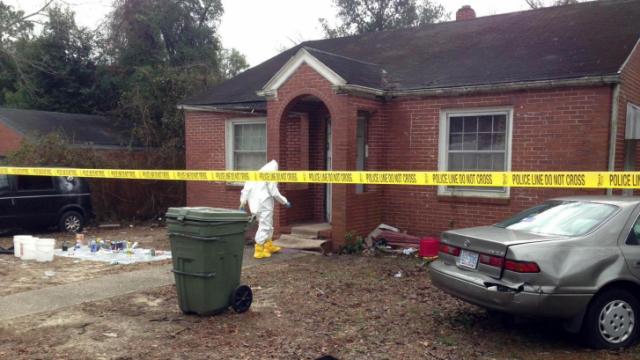 In 2013, state investigators broke up a record breaking number of methamphetamine labs in North Carolina. Meth lab busts have tripled in the state, raising from 177 busts in 2003 to 561 in 2013. The State Bureau of Investigation has been working around the clock with local law enforcement agents to stop meth labs from spreading, but is it enough to put an end to this growing infestation?

The “Shake and Bake” Method

Law enforcement agents have confirmed that out of the 561 lab busts for 2013, 81% were small household labs that used the “shake and bake” method.

This is an easy tactic used to create crystal meth in miniature batches without a heat source. Primarily used when in need of a quick and easy fix, the method involves mixing and shaking ingredients in a medium sized container; hence the “shake and bake” association. Some of the ingredients used in this method include Sudafed, Muriatic Acid, lighter fluid, lye and a Lithium strip from the inside of a AA battery.

The idea behind this technique, besides the quick results, is that by preparing the meth in smaller than usual quantities, meth cooks do not have to worry about the over-the-counter medication limits on Sudafed. Crystal meth addicts also use this method to bypass dealers. At the very least, the “shake and bake” method can be executed in bathroom stalls, bedrooms, and even moving vehicles.

Meth Labs: Finding A Needle in A Hay Stack

Most meth labs are easy to hide and can be transported quickly, causing an issue for law enforcement. North Carolina law enforcement has discovered that the majority of meth labs are located in rural counties. As meth users became more abundant, local law enforcement has been overwhelmed, requesting help from the state. In 2006, the state legislature ruled that it is mandatory for pharmacies to keep Sudafed behind the counter, hoping to stop the production of meth. The number of meth lab busts did drop for two years, but has exponentially risen since 2008.

Since meth labs are extremely easy to discard or relocate, North Carolina law enforcement had a hard time tracking down the sources of the growing meth problem in their state. Before converting to an online data system, purchases of Sudafed were tracked by a paper-based method. Proving to be inefficient, law officials were frustrated by the time-consuming aspect of this technique. Hard copy documents are organized and filed, which is tedious work when looking for a particular suspect in a file cabinet of over 1,000 different people. This method had more than a few problems, including: it was high in cost, had security issues, documents were lost, and it took tremendous efforts to sort through.

More than 400 North Carolina state officials are working closely with an electronic tracking program, National Precursor Log Exchange, or NPLEX, which has proven useful in tracing small meth operations. Samantha Gilman, author of “NC meth lab busts set record in 2013, up 22 percent” writes: “In January 2012, state law began requiring pharmacies to enter information into the exchange during sales of products containing pseudoephedrine, a decongestant found in many over-the-counter drugs such as Sudafed.” By doing this, the state can then track a person who was on record for buying large amounts of Sudafed, an essential ingredient in making meth.

Even though 2013 tallied the highest amount of meth lab busts to date in North Carolina, police are staying optimistic. Anyone found making meth is immediately prosecuted and put into jail. Sentences are worse for meth “cookers” who have children or seniors in the area with them when creating methamphetamine.

Deputy assistant director of the State Bureau of Investigation comments that NPLEX is “much more efficient” than the other, more outdated way of tracking down meth cookers. Before NPLEX, state officials had to travel from pharmacy to pharmacy, just to see if a suspected person’s name was recorded in the log book. According to Gilman, “Last year, NPLEX blocked 44,299 illegal sales of pharmacies in North Carolina.” This is a huge turnaround for local North Carolina officials, who are now able to work with a more efficient system. NPLEX helps pharmacies as well, giving them the ability to see if a person has already purchased a product containing pseudoephedrine in another county or state.