The Toxic Ingredients in Methamphetamine 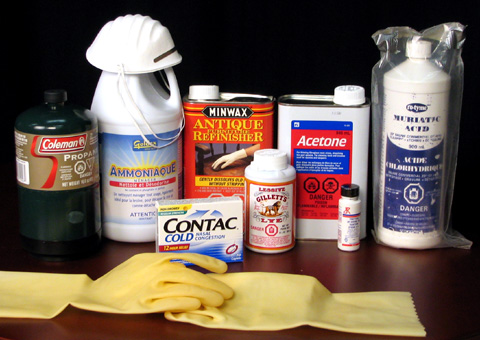 Meth is full of dangerous, toxic chemicals that most people would never put in their bodies. Meth cooks know what they and other tweakers consume, but for those who blindly take imported meth, here’s a look at what you are putting inside yourself.

With Mexican methamphetamine easily available, the majority of American tweakers forgo the dangers of home meth production, opting to purchase the imported product.  Lacking contact with the cooking process, it is easy to assume that one’s methamphetamine is clean and safe, a pure product with which to get high.  Right?  Wrong.  Meth is full of dangerous, toxic chemicals that most people would never put in their bodies.  Meth cooks know what they and other tweakers consume, but for those who blindly take imported meth, here’s a look at what you are putting inside yourself.

Sodium Hydroxide: Sodium hydroxide is highly corrosive.  It is a major chemical in drain cleaners, but is also used in biodeisel production and aluminum etching.  Sodium hydroxide is the caustic chemical used by serial killers and city workers to dissolve bodies– human or roadkill– into a viscous, coffee colored soup.

Anhydrous Amonia: Used as a fertilizer and an industrial refrigerant, anhydrous amonia is extremely dangerous to humans.  Exposure to the vapor alone can cause permanent eye, throat, and lung damage.  In contact with the body, anhydrous amonia causes severe burns and can literally dissolve a person’s flesh.

Ephedrine: This is the active ingredient in Sudafed, the sinus medication.  Ephedrine causes the brain’s release of dopamine, responsible for meth user’s feelings of euphoria and powerful addiction to the drug.  Ephedrine is obtained from Sudafed tablets by crushing the tablets and washing them in acid.

Ether: Ether is a highly flammable analgesic responsible for feelings of hypnosis and pain relief.

Drano: Drano burns eyes and skin, is poisonous when swallowed, and forms toxic gases when combined with other chemicals.  It is the main chemical in “drano bombs.”

Brake Fluid: Brake fluid is corrosive enough to eat through paint of chrome.  In contact with other chemicals, it can quickly ignite into a fireball.

Hydrochloric Acid: Commonly used to remove rust from steel, hydrochloric acid is another dangerously corrosive chemical both required to cook and present in methamphetamine.  It is also employed in leather processing, cleaning products, and in the production of PVC and polyurethane.  In high concentrations, hydrochloric acid can eat human flesh.

If you were considering starting meth: don’t.