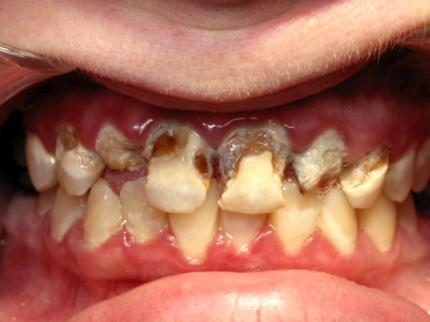 The extreme addictiveness of methamphetamine, or meth, devastates individuals, families, and communities. The dangerous physical and psychological effects of meth can destroy one’s life. Along with possible stroke, liver damage, depression, and schizophrenic behavior, one of the more noticeable side effects of the drug strikes one’s mouth.

The Gruesome Effects of Meth Mouth

The term meth mouth refers to the profound tooth decay and damage caused by methamphetamine use. As one of the most visible and common aspects of the drug, meth mouth characteristics include broken, discolored, and rotting teeth. Tooth decay often occurs in the cervical regions of the teeth where tooth surface narrows at the gumline. This decay may lead to tooth loss, fractures, and excruciating pain.

The grotesque appearance of meth mouth has been adopted by the media in order to demonstrate the scope of the drug’s effects. Also, anti-drug campaigns use these disturbing images to provoke disgust and deter people from using the drug.

The causes of meth mouth remain uncertain, but speculation suggests that the side effects of the high one experiences from meth use may be a key factor. The drug makes the user anxious, hyper, and nervous, provoking them to compulsively clench their jaw and grind their teeth. Chronic use of the drug might cause an inability to open one’s jaw entirely.

Meth smokers often acquire lesions and burns on their lips and inside their cheeks, while those who snort the drug experience burns in the back of their throat. However, no matter how the drug is consumed, meth decreases one’s ability to fight infection and heal after injury.

The main components of meth can be found in fertilizers, matchboxes, and batteries.

Another result of meth is the user’s strong desire to binge on sugary foods and drinks, which leads to even more acid production from sugar eating bacteria. This, along with an addict’s poor dental hygiene and neglect to brush or floss for long periods of time, sets them up for irreversible damage.

While the side effects of the meth high attribute a great deal to tooth decay, some presume that the chemicals found in the drug contribute to the oral devastation. The main components of meth can be found in: fertilizers (anhydrous ammonia), matchboxes (red phosphorus), and batteries (lithium). These dangerous substances destroy the tooth’s protective enamel coating.

The Degree of Suffering

The extent of the condition’s harm varies from case to case. In 2000, a report in the Journal of Periodontology found that users who snorted meth had significantly worse tooth decay than those who had smoked or injected the drug. Although suffering may be more consequential among some users, most believe that all users will experience some form of dental issues.

In addition, more evidence shows that the extent to which one uses meth does not matter. Dr. Athena Bettger, a dentist who on occasion practices at the Multnomah County Jail in Portland, OR recalls her experiences with meth mouth: “One gentleman I saw said he used it for four months and there was nothing except for root tips left in his mouth. Whereas, another gentleman I saw said he was using it for four years, and…I think three teeth needed to come out and he needed a couple of fillings because of the cavities.”

Meth mouth proves to be extremely difficult to treat and the effects may be irreparable. In order to stop the condition’s progression, an addict must quit using the drug, which can prove quite arduous considering meth’s highly addictive qualities. Also, treatment can be dangerous because of the potential for serious cardiac issues when meth and local anesthetic are combined.

Besides the complications involved with treatment, obtaining proper aid burdens public health budgets due to its high cost. In 2005, National Public Radio reported that dental costs in the Minnesota Department of Corrections had doubled in the past five years, mostly due to intense work operated on former meth addicts.

Meth continues to invade our society from rural farm towns to suburbs and has even spread to inner cities. Anyone who uses the drug endures its physical, psychological, and social effects. Meth mouth proves to be one of the most distinguishable characteristics of the drug. While the condition’s damage may be irreversible and treatment options costly, therapy can only begin when one ceases to use meth and finds an appropriate recovery plan.