Poppin’ Off: All About Poppers 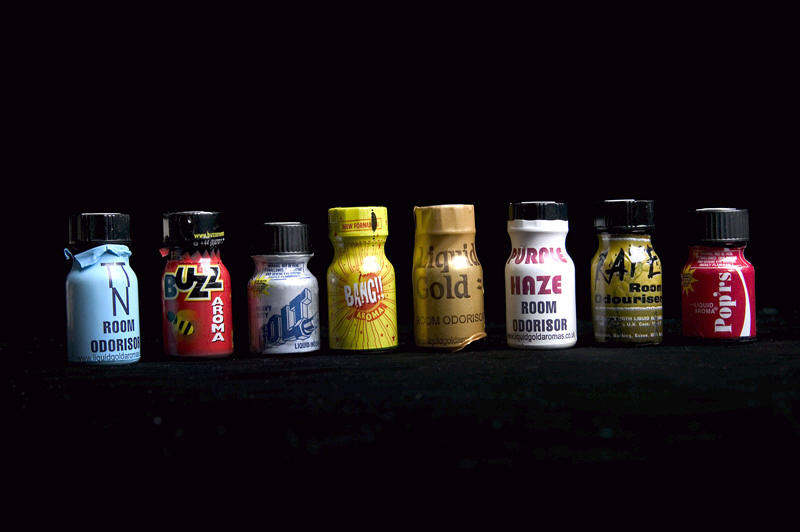 Nitrate inhalants have become a trending fad among club goers, the gay community, and even young children and adolescents. Because they are easily accessible and have found their way around the law, “poppers” may not be instinctively thought of as dangerous or addictive — but upon taking an in-depth look at research performed on the toxic substances, it becomes clear that they are no less harmful than hard narcotics.

Discovered in 1857, amyl nitrite was primarily used as a chest pain reliever. After being replaced by other medicines and its original use was forgotten, its only medical purpose became an antidote to cyanide poisoning. Although it is no longer commonly used in the medical field, it reemerged as a street drug in the 1960s and has since been redefined as a popular aphrodisiac used in rave and dance clubs.

Collectively known as alkyl nitrates, poppers are made of either amyl, butyl, or isobutyl nitrite. Straw in color, these nitrites originally came in small glass ampoules that had to be popped open to be inhaled, hence the name “poppers.” Nowadays, they’re still used for their intoxicating effects, but are more commonly found in small bottles with a screw cap that can be bought in record stores, sex shops, and clubs. While amyl butyl is produced and sold illegally, butyl and isobutyl are sold in these neighborhood stores as leather cleaners or room deodorizers.

A Rush of Blood to the Head

The tiny amber-colored bottles, priced from around $7 to $15, offer users an immediate, intense, and short-lived high. By increasing heart rate and causing a sudden surge of blood to the heart and head, inhaling the nitrite concoction results in a sensation similar to a headrush that lasts just as long.

In an interview, Dr. Ruben Baler, a health scientist at the science policy branch at NIDA (the National Institute on Drug Abuse), explained that these nitrite compounds are mostly used for enhanced sexual pleasure caused by an increase in blood flow dilation upon inhalation. This heightened sexual desire — in addition to lightheadedness, heat flash, and a sense of euphoria — is among the most appealing side effects for clubgoers.

Once You Pop, You Should Stop

French doctors warn that “every single dose of poppers may affect the retina” and can result in impaired vision and eye damage.

Poppers may seem appealing at first glance, but a myriad of unpleasant side effects accompany their use. These include, but are not limited to: nausea, dizziness, feeling faint, a slowed perception of time, coughing, burns around the nostrils, and even loss of consciousness. These effects kick in promptly after inhalation and last from one to five minutes maximum. If swallowed instead of inhaled, poppers can be fatal. They can also burn the skin if spilled and can lead to prevalent skin problems around the nose and mouth.

There are even more long-lasting consequences to be aware of from such a short-lived high. Because poppers reduce blood pressure, they can be very dangerous for those with anaemia as well as individuals with heart and blood pressure conditions, due to the high risk of suffering from a heart attack or cardiac arrest. Those with glaucoma should also be wary of poppers as they increase eyeball pressure. According to an article in the New York Times, French doctors warn that “every single dose of poppers may affect the retina” and can result in impaired vision and eye damage.

Even for those who don’t have any of those aforementioned health problems, risks are prevalent. Poppers lower immune system strength, and like every drug, a dependency can be developed if they are used over time. Even more serious, a study done by Peter V. Chin-Hong, M.D. and colleagues at the University of California revealed that the risk of low-grade precancerous lesions was higher among individuals who had used poppers in the past six months. Poppers can even result in sudden death due to a phenomenon known as Sniffing Death Syndrome, in which users are killed by lethal heart failure from a single use of an inhalant.

Pop, Lock and Drop It

As a club drug, poppers are often used in conjunction with other substances. In the moment, it may sound enticing to mix poppers with alcohol, ecstasy, MDMA, Viagra, or cocaine, but there are serious risks to doing this. When poppers are mixed with Viagra, the individual’s blood pressure can drop to extremely low levels because both drugs are working to dilate your blood vessels, making it very difficult to get the necessary oxygen flow to your brain and heart. If mixed with any of these substances, poppers can cause anything from fainting and dizziness to more dangerous outcomes such as brain damage, coma, and death.

Because poppers are often used for sexual purposes, they are frequently associated with impaired judgement and practicing risky sex in the heat of the moment. As Dr. Baler explains, “Any drug that can cause increased risk taking or bad decision making in the context of a club or risky sexual behavior will increase the spread of bloodborne diseases and viral infections, like HIV or hepatitis.”

Though poppers have not yet been reported to cause addiction in the sense of physical dependence or withdrawal systems, many have admitted to psychological dependence.

“It’s true that poppers, by their pharmacology, do not affect the dopamine system directly, which is the one that is directly connected to the rewards system and the addictive ability of other drugs of abuse,” Dr. Baler explains. “However, people could become addicted to the associated behaviors, like enhanced sexual function. The fact that poppers may or may not be addictive says nothing about the safety margin of the drug. Something can be absolutely not addictive, but can be very dangerous.”