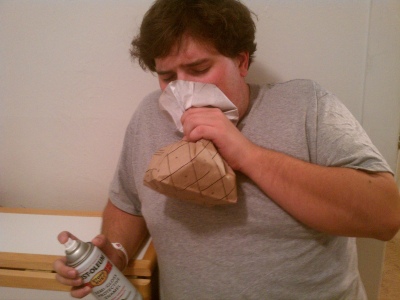 What is an Inhalant?

Inhalants are the fumes and vapors of chemicals found in ordinary household or office products. Almost anything with a strong chemical smell can be used as an inhalant. They typically fall into one of four categories:

Gases can be found in butane lighters, propane tanks, and even things as common as whipped cream dispensers. Some of the more dangerous gases are meant for industrial use like ether, chloroform, nitrous oxide (laughing gas), and medical anesthetic gases.

Nitrites include amyl, cyclohexyl, and butyl nitrites. These are industrial grade chemicals and are the most likely to be sold on the street rather than found in the home. They are typically sold in small brown bottles with vague labels like “video head cleaner”, “liquid aroma”, and “leather cleaner”.

How are they used?

The chemical vapors from inhalants can be easily breathed in just by holding the product under the user’s nose. Inhalants in volatile solvent form can be poured on a rag or paper towel to prolong the release of the fumes. Aerosols can even be sprayed directly into the nostrils or mouth. Users will often try to concentrate the chemicals by spraying them into bags, balloons, or even surgical gloves before inhaling.

Inhalant abuse is most common among young children, from 7th to 9th grade, supposedly because of the ease of access compared to alcohol and because these children do not fully understand the risks of inhalant abuse. Usage among adults is usually attributed to chronic usage during adolescence that has become an addiction into adulthood.

What are the effects and the risks?

Inhalants produce a quick high that impairs judgment and movement and is similar to excessive drinking. However, this high lasts less than an hour. Users tend to abuse inhalants over the span of several hours because of this rapidly diminishing high. This repeated abuse can lead to the development of an addiction and frequent users can also develop a tolerance for inhalants, requiring them to use more and more chemicals to achieve the same level of intoxication.

Because of the many different types of inhalants and the myriad ways in which they can be abused, the dangers of using inhalants varies greatly from user to user. This also means that casual users are as much at risk as more frequent users.

There is also a phenomenon called “Sudden Sniffing Death” in which users are killed by lethal heart failure from a single use of an inhalant. This can happen to otherwise healthy individuals and can even happen to first-time users.

What are the signs of abuse?