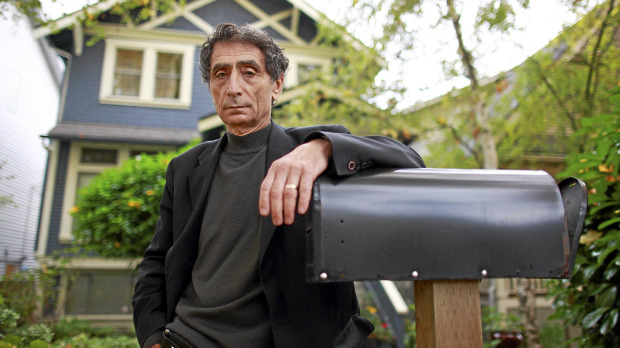 Nearly ten years ago, North America's first safe-injection site opened in Vancouver, B.C., providing clean needles and treatment for struggling addicts. A driving force behind this facility was Hungarian-born author and physician, Dr. Gabor Maté. We spoke with this renowned physician about addiction stigmas, America's war on drugs, and what it means to be a "hungry ghost."

Adrienne Hurst: Dr. Maté, thank you for making the time to do this interview. Tell us a bit about yourself and your book, In the Realm of Hungry Ghosts.

Dr. Gabor Maté: I'm a medical doctor and author. After twenty years in family practice and palliative care, for twelve years I worked in the Downtown East Side of Vancouver, notorious as Canada's poorest postal code and North America's most concentrated area of drug use. Within a few square blocks' radius, there are thousands of human beings dependent on injecting, ingesting or inhaling a multiplicity of substances such as heroin and other opiates, crystal meth, cocaine, and alcohol, not to mention cannabis and nicotine.

For two of those years I was the physician at a detox facility associated with Insite, North America's only legalized supervised injection site. In The Realm of Hungry Ghosts is my depiction of the people who inhabit that world, an inquiry into what drove them to their life-threatening habits, an examination of the biology and psychology of addictions in general—including my own addictive behaviors—and, finally, a look at the irrationality of the War on Drugs, so-called, and an exploration of saner ways of responding to the human tragedy of addiction, including substance dependence.

AH: What surprising or significant information about addiction did you learn through working in North America’s largest drug hub?

GM: I don't know that I learned anything absolutely new, but what was driven home to me daily was the humanity of the people I served—humanity in the sense that their needs for peace, harmony, validation, relief from suffering, agency and dignity in their lives were shared characteristics with all human beings. Their dysfunctional attempts to meet those needs through substances were also representative of the common human urge to fill from the outside the yawning emptiness within.

AH: What is this phenomenon of the “hungry ghost”? Do you think that these individuals are misrepresented in society?

GM: The "hungry ghost," a Buddhist phrase, is the precise part of ourselves that experiences unbearable emptiness and spends its whole life attempting to satiate that emptiness by seeking something, anything, from the outside. Of course, the task is impossible so the ghost remains hungry forever. That's addiction, whether to drugs, power, wealth, food, looks, status, relationships, sports, video games—in short, to anything. Since our society breeds such ghosts in all of us and since it's a part of ourselves we loathe and fear, we ostracize the person who most nakedly represents our own ghost selves: the drug addict. We look in his eyes and see our own emptiness; we don't like it, so we reject him.

AH: What are some of the major mistakes you see addicts making in recovery that keep them from coming (and staying) clean?

"Since our society breeds such ghosts in all of us and since it's a part of ourselves we loathe and fear, we ostracize the person who most nakedly represents our own ghost selves: the drug addict."

GM: Addictions are always about attempts, mostly futile, to soothe pain. In the case of hardcore drug addicts, that pain almost invariably originates in childhood trauma, emotional loss, neglect or abuse. Hence, the addiction is not the primary problem—it is an attempt to solve the problem of pain. Of course, it creates more pain. But trying to give up the "solution" without addressing the underlying problem of the emotional suffering that potentiated the addiction is often doomed, because we are not dealing with the source.

AH: What are your views on the social and biological causes of drug addiction?

GM: Addiction is, of course, biological in that it involves brain circuits, hormones and neurochemicals. The question is, what causes the biology? It is not genetics. Genetics can predispose but not predetermine; so genes might be implicated, but they cannot cause addiction by themselves, as they are turned on and off by the environment. It's the child rearing environment we need to look at, especially during the key first years of brain development. We now know that it's experience, not genetics, that shapes the fine circuitry of the brain. More broadly speaking, we need to look at the entire culture and economic context in which we live, because they exert such a great influence on the family environment in which the child's brain develops. The more stressed the social environment, the more addiction we are likely to see. A prototypical example is provided by the aboriginal populations of North America in the wake of brutal colonization.

AH: In your book, you express your support for the decriminalization of all drugs. Do you see this as a possibility in the near future? How do you envision drug addicts operating under this new freedom?

GM: I don't see any possibility of decriminalization in the near future, despite the overwhelming evidence in favor of it and many respectable international voices calling for its adoption, including current and former world leaders. However, the system represented by the so-called War on Drugs (in reality, a war on drug addicts) is far too entrenched economically and politically to yield to sanity. As to what it would mean, this has been demonstrated in, say, Portugal, where people are no longer jailed for the possession of drugs for personal use. That's not exactly decriminalization, but it's certainly a step in the right direction. In a decriminalized system, confirmed addicts would receive their drugs under controlled conditions, as in the heroin clinics that have been successfully established in a number of countries. The results are uniformly positive.

AH: Why is harm reduction important?

GM: Harm reduction is important because it reduces the harm. For example, injecting with a clean needle eliminates the risk of HIV transmission. It is difficult to see what is controversial about that. But, equally important, harm reduction also gives the message to a highly traumatized population that they are accepted for who they are, without having to meet someone else's unrealistic expectations for how they should be. That begins to remove the burden of trauma from their shoulders. For many, that's a necessary first step.

AH: Some of your work, including your studies on the addiction treating benefits of the Amazonian hallucinogenic, ayahuasca, has been deemed too progressive by government agencies. Tell us a bit about these studies. How have you dealt with the backlash, and what are your hopes for the future of addiction research?

GM: Ayahuasca, a traditional healing plant from the Amazon, is no panacea for addiction or anything else. But the powerful visions it can induce, if experienced in a safe context in the right ceremonial guidance, can open people up emotionally and spiritually to deeper realities than their ordinary minds can usually experience. And that, in turn, can be a powerful impetus to healing. I've seen it work—but, again, in the right context. The latter is as important as, or more important than, the plant itself. In regards to backlash, Health Canada—our regulatory agency—has informed me that the plant is illegal for healing purposes, although they have conceded that it's neither addictive nor harmful and have approved it for religious use.

“Harm reduction gives the message to a highly traumatized population that they are accepted for who they are, without having to meet someone else’s unrealistic expectations for how they should be. For many, that’s a necessary first step.”

AH: As a physician who works with severely addicted patients—people who, as you state in your book, “value their health and well-being less than the immediate, drug-driven needs of the moment”—you show incredible empathy for all who come to you. If society were to recognize addiction in the same way you do, how would addiction treatment change?

GM: How would society change if we acknowledged that mistreated children may (and often do) become dysfunctional adults? If we recognized that people do not choose to be mentally ill or to be addicted? If we offered compassion instead of contempt to those amongst us who have been most traumatized? If we put the resources now wasted in an oppressive legal system and a narrowly-conceived medical system into real rehabilitation? I will leave your readers to ponder those questions for themselves, as, I believe, we all should.