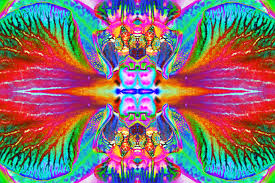 An extremely effective, naturally occurring hallucinogenic compound, N, N-Dimethyltryptamine (DMT) is arguably most famous for its instant and intense high. It appears not only throughout the plant kingdom, but also in trace amounts in humans and other mammals, originally derived from the essential amino acid tryptophan. Although the reason for its presence in the human body remains somewhat a mystery in the scientific world, many indigenous and modern cultures seek out DMT’s potent psychedelic effects to explore altered states of consciousness.

First synthesized in 1931 by Canadian chemist Richard Helmuth Fredrick Manske, DMT was later discovered as a natural product by Brazilian chemist and microbiologist Oswaldo Goncalves de Lima in 1946. The finding occurred when Goncalves de Lima isolated a specific alkaloid from the root bark of Mimosa tenuiflora. Since 1955, DMT has been detected in over 50 plant species, at least four animal species and three different mammals.

The history of human experience with DMT presumably goes back thousands of years, arguably because of the drug’s association with a number of religious practices and rituals. DMT gained popularity as an abusive drug in the 1960s; however, when the Controlled Substances Act passed in 1971, the federal government deemed it illegal.

DMT remains intact long enough to be absorbed in adequate amounts to affect brain function and produce psychoactive effects. In clinical studies, DMT was fully hallucinogenic at doses between 0.2 and 0.4 mg/kg. Administered alone, DMT is typically snorted, smoked or injected because the oral bioavailability of the drug is very poor.

Within a few seconds of taking the drug, one travels to a place far beyond the traditional ideas of reality, only to descend back to earth within 15 to 45 minutes. DMT produces a powerful psychological experience including: intense visuals, euphoria, depersonalization, auditory distortions and an altered sense of time and body image.

While its psychological effects have been glorified as an exploration of the spiritual realm, DMT’s physiological effects are all too real, including: hypertension, increased heart rate, agitation, seizures, dilated pupils, nystagmus (involuntary rapid rhythmic movement of the eye), dizziness and ataxia (muscular incoordination). At high doses, coma and respiratory arrest have occurred.

Naturally produced in many species of plants, South American Shamans often use plants containing DMT in their practices as one of the main active components of the drink ayahuasca, which translates from Quechua as “vine of the spirits” or “vine of the dead.” Shamans utilize the psychedelic brew because of its extraordinary mental distortions and supposed healing qualities.

When described by volunteers of research studies and experimentalists, participants have described in detail a multitude of encounters, including: mischievous shapeshifting elves, praying mantis alien brain surgeons and jewel-encrusted reptilian beings.

The intense effects and short duration of action attract individuals who want the psychedelic experience, without the mind altering perceptions over an extended period of time, as occurs with other hallucinogens, like LSD. For this same reason, DMT acquired the nickname the “businessman’s lunch” in the US during the 1960s.

Although federal law classifies DMT as a Schedule I drug making it illegal, the Supreme Court allowed the Brazil-based Uniao do Vegetal (UDV) church to use a decoction (a tea made from boiling leaves and vines) containing DMT for their Christmas services in December 2004. In February 2006, the Supreme Court unanimously ruled that the US federal government must allow the UDV to import and consume the tea for religious ceremonies under the 1993 Religious Freedom Restoration Act.

Speculations suggest that endogenous DMT is produced in the human brain, contributing to certain psychological and neurological states. In 1988, medical researcher, J.C. Callaway, suggested that DMT might be connected with visual dream phenomena: DMT levels would be periodically elevated to induce visual dreaming.

More theories include Dr. Rick Strassman’s research during the 90s at the University of New Mexico, when he surmised that a massive release of DMT from the pineal gland occurs prior to death or near death experience. Currently, no published reliable scientific evidence supports Dr. Strassman’s hypothesis.