You’re Either On the Bus or Off the Bus: The Psychedelic Era 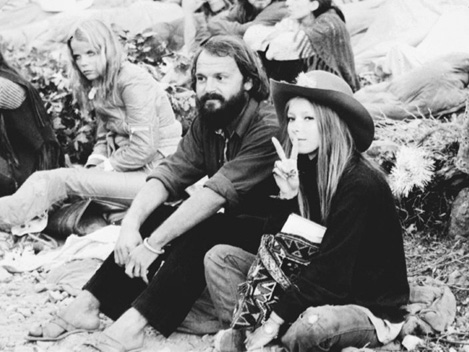 Emerging within the hippie counterculture movement, the psychedelic era of the 1960s is remembered for its radical social values, music, art, and, of course, its drugs. Hippies rejected traditional institutions and middle class values, embracing aspects of eastern philosophy and seeking to find new meaning in life. Playing pivotal roles in the movement, scientist Dr. Timothy Leary and author Ken Kesey promoted LSD (lysergic acid diethylamide) as the holy grail to enlightenment and established California as the crusade’s mecca.

Before the rise of the hippie counterculture, researchers had been studying LSD as a treatment for everything from alcoholism to obsessive-compulsive disorder (OCD). American researchers initially experimented with the drug in 1949, employing it to replicate mental illness. However, once scientists realized its psychedelic properties, LSD became known as a miracle cure for its use in psychotherapy and treating alcoholism.

In regards to psychotherapy, some psychiatrists believed the drug encouraged patients to “unblock” their repressed subconscious. One study concluded that “the root of the therapeutic value of the LSD experience is its potential for producing self-acceptance and self-surrender.” Many presumed that LSD forced the user to confront issues and problems infiltrating their psyche.

By 1965, over 1,000 papers had been published examining positive results for LSD therapy, reporting potential benefits for treating anxiety disorders, OCD, depression, grief, and even sexual dysfunction. However, most of the studies experienced flaws and results proved inconclusive. Research became further obstructed as the public’s fear of LSD increased and the battle against hallucinogens and marijuana intensified.

Anti-drug warnings from medical and law enforcement authorities encouraged broad coverage by the mass media. By 1966, the chairman of the New Jersey Narcotic Drug Study Commission declared that LSD was “the greatest threat facing the country today… more dangerous than the Vietnam War.” Medical authorities contributed to the drug’s publicity with exaggerated and unsubstantiated reports of LSD effects, such as rotting of the mind and lack of motivation. Eventually the inflation of negative publicity from the government and medical institutions forced the Harvard project to shut down.

Turn On, Tune In, Drop Out

Dr. Timothy Leary, a psychologist at Harvard University, became an infamous researcher in these studies, later widely blamed for destroying the drug’s medical reputation. Colleagues accused him of growing less interested in clinical trials and focusing more on LSD promotion. After the Harvard project closed its doors, Leary hosted a slew of drug parties and eventually began prescribing LSD, believing the drug exhibited immense therapeutic potential for use in psychiatry.

While hippies embraced Leary’s teachings, his unconventional research methods and his incredibly public endorsement of the drug’s recreational benefits ignited a storm of backlash from the government. Ultimately, heightened public controversy resulted in his termination from Harvard and numerous arrests.

Still, many understood Leary’s theories as truths and his following spread, landing him an opportunity as one of the main speakers at a now-famous rally. In protest of a new California law banning the use of LSD, upwards of 20,000 hippies, artists, and Hell’s Angels gathered in San Francisco’s Golden Gate Park for a “Human Be-In” on January 14, 1967.

The event explored ideas such as higher consciousness, personal empowerment, cultural and political decentralization, communal living, and the acceptance of illicit drugs. The “Human Be-In” acted as a soapbox for Leary’s radical beliefs, in which he introduced phrases such as “turn on, tune in, drop out” as well as “think for yourself and question authority.” With acid distributed throughout the crowd, the occasion received extensive media coverage from major networks, popularizing the hippie culture throughout the United States.

Summer of Love in Haight-Ashbury

The mainstream media’s coverage of the hippie lifestyle extended to San Francisco’s Haight-Ashbury district, named after the two intersecting streets. The neighborhood’s fame piqued the interest of youth all over America as rock-stars, writers, and hippies flooded the streets. At the peak of Haight-Ashbury emerged a social phenomenon in 1967, with as many as 100,000 people gathering in the streets for the Summer of Love festival, embracing sex, drugs and rock n’ roll.

San Francisco became a melting pot of political awareness, music, drugs, creativity, and a total lack of sexual and social inhibition. The 1960s counterculture has been synonymous with the city, while historians deem the the Haight-Ashbury neighborhood as the birthplace of the hippie movement ever since.

Can You Pass the Acid Test?

Around the same time, American author Ken Kesey began throwing a series of happenings he called the “Acid Tests” in the San Francisco Bay Area. Centered entirely around the use and advocacy of LSD, Kesey bombarded public places, advertising with posters that read, “CAN YOU PASS THE TEST?”

Initially introduced to LSD through volunteering in a CIA-funded project at the Veterans Hospital in Menlo Park, Kesey acted as a guinea pig for a study involving psychotomimetic drugs. The experiments that began in CIA-funded laboratories were now being conducted in rural, natural surroundings supplied by Kesey. However, the Acid Tests may never have been possible without the help of one man in particular. Augustus Owsley Stanley, better known as “Bear,” manufactured some of the purest LSD ever to hit the scene, providing high quantities of the drug to Kesey’s gang.

Surrounded by his group of comrades known as the Merry Pranksters, Kesey’s parties explored the realms of acid through sight and sound with the use of black lights, strobe lights, fluorescent day glo paint and musical performances by bands like the Grateful Dead. The parties gained such notoriety that authors like Allen Ginsberg, Tom Wolfe, and Hunter S. Thompson described their experiences at the Acid Tests in great detail.

“When you’ve got something like we’ve got, you can’t just sit on it and possess it; you’ve got to move off it and give it to other people. It only works if you bring other people into it.” – Ken Kesey

Kesey’s attempt to broaden the use of LSD extended across the nation as the Merry Pranksters journeyed cross country in a 1939 International Harvester School bus. The bus, given the name “Furthur,” served as the group’s homestead while traveling and would become a legendary image of the 1960s. Touting the motto, “You’re either on the bus or off the bus,” the voyage allowed Kesey to share his message with the public. “When you’ve got something like we’ve got,” he explained, “you can’t just sit on it and possess it; you’ve got to move off it and give it to other people. It only works if you bring other people into it.”

With the publicity of Kesey’s Acid Tests and Leary’s vast promotion of the drug, the experience became more accessible to a widespread audience that may not otherwise have been involved in the counterculture of the 60s. The impact Leary and Kesey created throughout the psychedelic era imparted the pursuit of freedom in the body and mind.

As a result of Leary and Kesey’s promotion of enlightenment through the use of acid, the psychedelic era surpassed sunny California and transcended throughout homes all across the nation. As their ideas spread, the mainstream absorbed the hippie counterculture, leaving a lasting influence on philosophy, morality, music, art, lifestyle and fashion. Advocating the use of LSD as a method of raising consciousness, the hippie counterculture movement of the 1960s became a decade of questioning traditional ideas and established institutions for many Americans.

With their primary doctrine that life is about achieving happiness through self expression and understanding, hippies influenced generations to come to reject conservative values and search for new meaning. Searching for a means to explore altered states of consciousness, the counterculture movement of the 1960s embraced Leary and Kesey’s philosophies and the use of LSD. Hippies’ anti-establishment lifestyle opposed political and social violence, instead promoting principles based on peace, love and personal freedom for all.