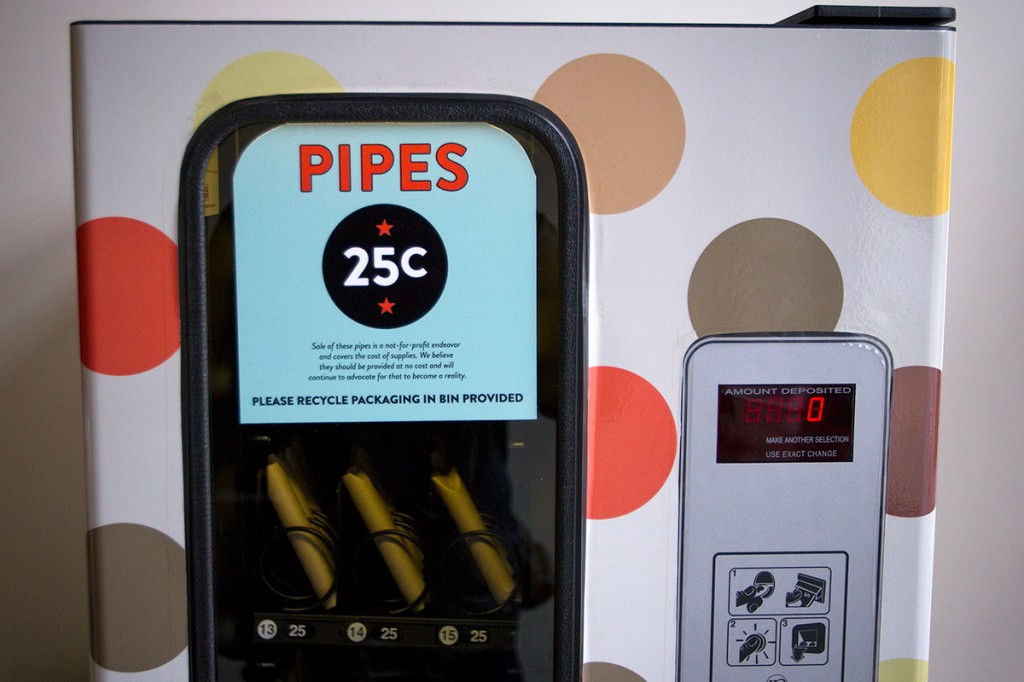 According to The Globe and Mail, PHS’ Drug Users Resource Center placed two of the vending machines in Vancouver’s Downtown Eastside about six months ago. Each machine comes stocked with 200 high-quality shatterproof Pyrex pipes. At just 25 cents apiece, the pipes are seen as a way to lower their street value and the spread of injury and disease. As reported by the NY Daily News, using and sharing chipped or broken pipes leads to a higher risk of HIV and hepatitis C contraction.

“Studies have shown that individuals who use crack cocaine on a daily basis face all sorts of threats to their health, one of which is related to the use of substandard or shared pipes,” Dr. M-J Milloy, a research coordinator with the B.C. Centre for Excellence in HIV/AIDS, told The Globe and Mail. “To give them better access to more pipes will be shown to be a good thing.”

Thus far the vending machines have been proven to be popular in their Downtown Eastside location, as each machine has to be restocked every five days.

As with all harm reduction efforts, the use of the colorful polka dot design aims to help reverse the stigma so often associated with drug use.

“Part of the design that we chose is to provide a sense of respect and dignity to the user, who is pretty much stigmatized and reviled everywhere else in the city,” co creator of PHS, Mariner Janes, told Vice.

While some oppose the introduction of such vending machines, citing they’ll increase usage particularly among young adults due in part to its marketing efforts, last year’s report on drugs in  in Vancouver by the Urban Health research Initiative (UHRI) proves that harm reduction has helped lower the amount of people using injection drugs and decrease the spread of HIV and hep C transmissions.

“Drug trends in Vancouver are shifting, with fewer people injecting drugs and more people ceasing their use, a result of the innovative harm reduction and addiction treatment programs implemented,” Dr. Thomas Kerr, UHRI co-director, told the B.C. Centre for Excellence in HIV/AIDS. “It’s important policymakers at all levels of government take note of this evidence and focus efforts on approaches proven to be more effective. Continuing to invest in failed policies like the war on drugs does little to reduce health and social harms.”