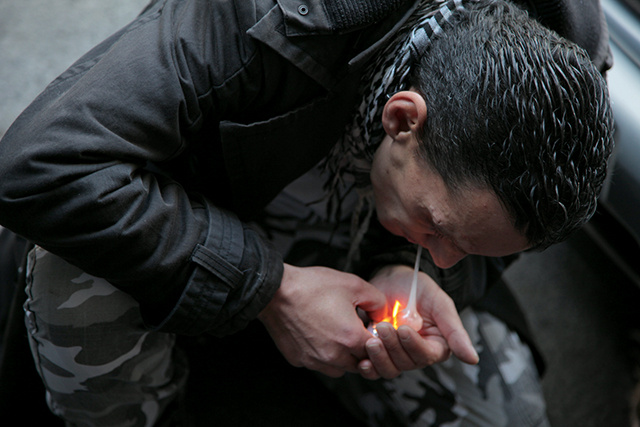 Derived from the Persian word for glass, Sisa, is a destructive, cheap synthetic drug crawling through the poverty-stricken streets of Greece.

While little is known about the drug, Open Democracy reports that it’s an enhanced form of crystal methamphetamine created by mixing amphetamines with a series of liquids, oftentimes including: battery acid, engine oil or shampoo.

“There’s three ways you can take sisa,” Stathis, a 40-year old addicted to sisa, told Vice in an article. “With a pipe, with a syringe or with a piece of aluminum, and I’ve seen people snorting it as well. But let me say that if you shoot it, you don’t have long to live. It destroys all vital organs from the inside.”

The rising popularity of this dangerous drug stems from the five-year long economic crisis and political turmoil Greece has been suffering. With unemployment reaching nearly 30% and the majority being young adults, many, particularly those living on the streets of Athens, have turned to deathly drugs like Sisa as a form of escape. Sold for as little as two euros a hit, the drug can be injected or smoked and produces effects like insomnia and aggressiveness.

“It melts you,” Kostas, another homeless addict, described to Vice. “It hits others in their nervous system. It creates wounds on the body that don’t heal, they never close. It starts like a pimple and instead of healing, it grows. Even the user’s face is full of holes.”

While the drug is currently seen predominantly in Greece, its affordable appeal could potentially lead to people importing it to other countries, as has happened with Krokodil. It’s important to remain educated on this problem and be aware of the deteriorating effects of Sisa, and meth, on the body. It may be nicknamed the “cocaine of the poor,” but, as more research is uncovered, it falls into a toxic category unique to other drugs.