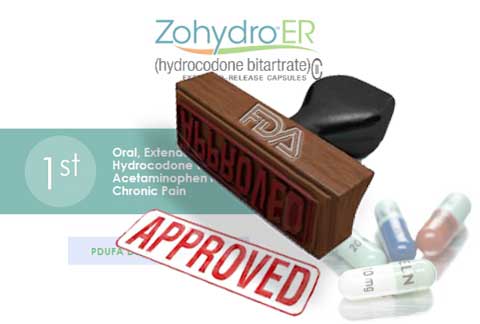 What better time than the present? The question didn’t escape the FDA, which has formally issued approval of a new opioid prescription painkiller called Zohydro. This prescription-only opioid analgesic was approved as a Schedule II drug.

Why the change? Zohydro is a trade name for a drug manufactured by Zogenix containing hydrocodone. Not just a small amount of hydrocodone either: Zohydro contains ten times the dosages of currently sought-after OxyContin. On top of that, this pill is crushable, which leaves the drug snort-able for opioid addicts. At a time when national painkiller prescription overdose deaths are shattering record highs, people are concerned.

Even beyond these facts, there are other reasons to be concerned: the FDA’s approval of the drug followed an 11-2 vote against its approval late last year by the FDA’s advisory panel based on its abuse potential. This decision was overridden in November of last year by top FDA officials… a fact even more relevant when a Freedom of Information Act request revealed a series of emails documenting a decade of appointments between FDA officials and analgesic-producing companies. One such company was Elan Corporation, the original manufacturer of Zohydro. Though Zohydro’s current manufacturer, Zogenix, wasn’t involved yet, they would later join in a partnership.

Though Zogenix denies any relation between its predecessor’s meetings and the drug’s legality, it’s difficult not to be suspicious, especially in light of the FDA’s overturn of the advisory board’s recommendations.

42 medical agencies have already made their reservations on this matter quite loud and clear. Petitions and protests are underway and scheduled in the near future. There are rallies to be held, including Washington, D.C.’s “FED UP!” on September 28 — a protest calling attention to the growing issue of opioid addiction. Attorney generals across 28 states have requested reconsideration. The FDA has responded by insisting that the drug is safe and needed for patients suffering critical amounts of pain.

And to that many doctors have said they don’t see patients in need of these levels of hydrocodone. Zohydro is pure hydrocodone too, so the potential for abuse is high. The drug facts themselves state that just one pill is sufficient to kill children, and two pills may cause death in adults.

Police agencies are also concerned about the drug, which they too see as rife with abuse potential. Availability of higher quality, higher concentration opiates is not what many parts of the United States would ask for right now.