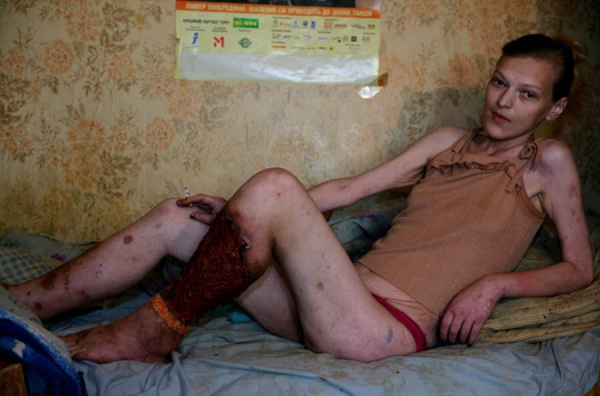 "Russian heroin," the "crocodile drug," and "the worst drug in the world" — as cases crop up outside of its homeland, krokodil has become known under many monikers. In the midst of its recent scare in the US, many are wondering what krokodil is and how it can affect users.

Masquerading as heroin, krokodil is literally a flesh-eating drug: a badly thought-out composition of extremely dangerous chemicals. It was invented in Russia during a heroin shortage and is made from everyday ingredients including codeine, alcohol, paint thinner, lighter fluid, and gasoline. Its psychoactive component, desomorphine, is nearly ten times as potent as morphine.

This drug rots the flesh straight off the body, disintegrates teeth and bones, and causes the appearance of gruesome scales.

Now, after reported cases of use in Arizona, Illinois, and Utah, the Oklahoma Bureau of Narcotics is investigating the deaths of two men thought to have died from the use of this imported and highly dangerous opiate.

Considering the toxicity of its ingredients, it is no small wonder that this drug rots the flesh straight off the body, disintegrates teeth and bones, and causes the appearance of gruesome scales, which are reptilian in appearance — hence the name krokodil ("crocodile" in Russian). It also causes the rapid onset of gangrene.

According to Dr. Abhin Singala, a specialist at the Chicago-area Presence St. Joseph Medical Center, the life expectancy of a krokodil addict is just two years. Clearly, this is not a drug fit for human or animal use — but people continue to risk their lives by using it.

Why? It’s about ten times less expensive than heroin and produces a similar high, which appeals to desperate addicts.

Krokodil users boil and filter the mixture before injecting it. They are likely to share it with others, which brings the added risks that comes with needle sharing. It is also reportedly available in capsule form.

The life expectancy of a krokodil addict is just two years.

Krokodil is a cruel mechanism that has the potential to hook extremely vulnerable drug addicts because of the appeal of its low cost. In Russia, areas of lower socioeconomic wealth are reporting higher incidents of krokodil abuse, which demonstrates that it is the poor who suffer the most when drugs like these are pushed by callous dealers.

Shockingly, over one million people in Russia have reported their addiction to the drug, despite knowing it can quite literally dissolve their body and eat them up from the inside out.

In the United States, reports of Krokodil are popping up at an alarming rate, indicating that the drug may have infiltrated the nation earlier and further than authorities initially thought.