Rehabs That Allow Smoking Near Me 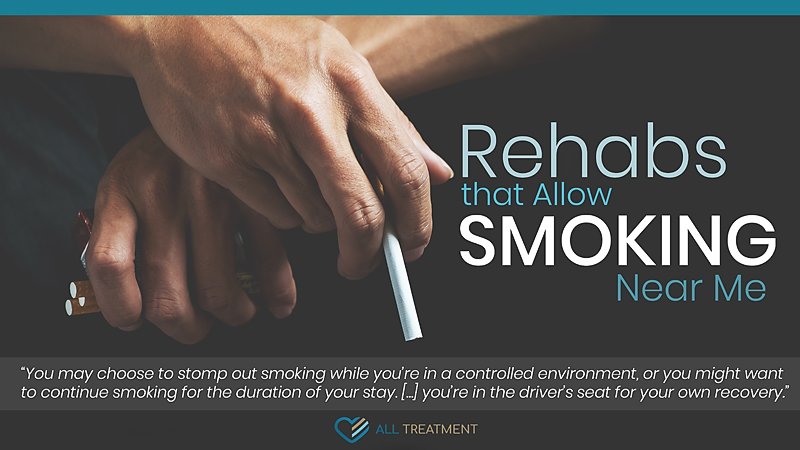 Attending rehab can be a tremendous undertaking for patients. Adjusting to new habits and reforming behaviors in a foreign place can incite additional challenges on the road to recovery. It’s important to make every effort to approach rehab with some semblance of familiarity. So what happens when you rely on nicotine to get through your day-to-day life? Are you expected to detox from cigarettes in addition to treating your substance abuse disorder (SUD)?

As of 2019, there is no federal ban on cigarettes in rehab centers, while state-funded rehab centers are bound only by the rules set forth by public health organization (PHO) policies and the rules set forth by the state or city. Private rehabs can disregard PHO guidelines, although they are required to follow federal and state policies.  In short, different rehabs have different rules, implemented by independent or government-regulated policies.

The detox process is a painstaking one, however beneficial and necessary it might be to regain control of your life. While detoxing, it’s important to focus on your overall health by sleeping enough, staying hydrated, eating the right foods, and eventually becoming more active. You may choose to stomp out smoking while you’re in a controlled environment, or you might want to continue smoking for the duration of your stay. As long as the rehab allows it, you’re in the driver’s seat for your own recovery.

Options for Quitting Nicotine in Rehab

In a rehab setting, treating SUDs in conjunction with nicotine cessation is encouraged but not always required. There are many benefits to quitting, and a rehab facility may be the optimal place to be while doing so. Many nicotine replacement therapies (NRT) are available if you choose to cut smoking while in rehab.

Some NRT options include:

Nicotine replacement therapies are easier to monitor and taper down over time. Once the delivery of nicotine is tapered, the habit of smoking can be addressed. Two medications have been approved for nicotine addiction and can be prescribed in rehab: bupropion (Zyban®) and varenicline (Chantix®) are commonly prescribed to control cravings and prevent nicotine relapse. Both are very effective when combined with behavioral therapies also conveniently provided in rehab.

A study conducted by Dr. Andrea H. Weinberger of the Ferkauf Graduate School of Psychology suggests that quitting smoking in recovery can be beneficial for long-term sobriety. In this 2001-2005 study, interviews were provided by 5,515 people who responded to the National Epidemiologic Survey on Alcohol and Related Conditions (NESARC). All participants were in remission from SUD and provided answers in 2001-2002, then again in 2004-2005.

The study concluded that:

Dr. Weinberger and her team had theories to explain these results. Because illicit drug use is often accompanied by nicotine addiction, cigarette smoking may be a relapse trigger. Cigarette smoking is also linked to opiate and stimulant cravings and therefore may also trigger relapse by association.

Don’t Let Nicotine Addiction Stand in the Way of Recovery

Patients often walk into rehab feeling like they have lost control of their lives. The fear of withdrawal and the hard work necessary to remain sober are both daunting. If nicotine addiction is a reason to refuse treatment for SUD, it’s important to find a treatment center that will cater to your needs. If you or a loved one needs assistance in locating the right rehab, contact our friendly staff today. We’re here to help you on the road to recovery. Here is a list of rehab centers that allow smoking.