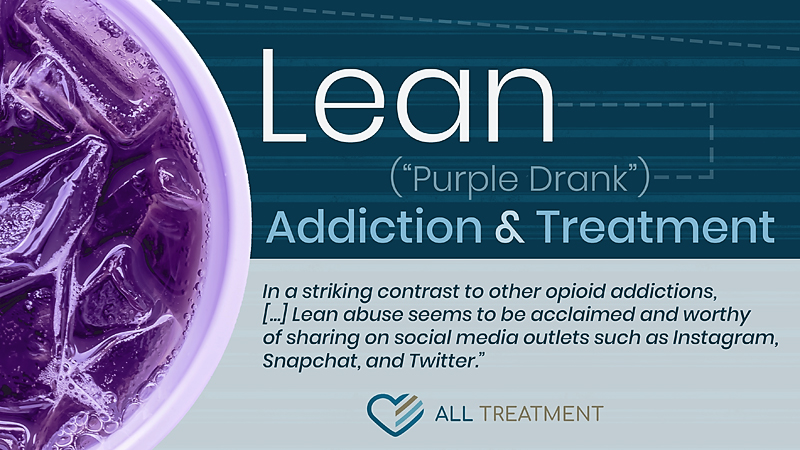 Lean (aka “Purple Drank,” “Sizzurp,” “Syrup,” and “Juice”) has been in circulation since the 60s in Houston, Texas, gaining popularity in the early 90s underground hip-hop scene. The drink blend was created with the promise of relaxation, euphoria, and overall good time. Lean is one of many street names for a drink comprised of fruity soft drinks, hard fruit candy, codeine, and promethazine. So how did Lean get so popular in our current mainstream? And just how dangerous can this fizzy purple drink be?

Symptoms of Lean Use

Symptoms of Lean use are similar to other forms of opioid abuse. In striking contrast to other opioid addictions, however, Lean abuse seems to be acclaimed and worthy of sharing on social media outlets such as Instagram, Snapchat, and Twitter.

While the drink seems harmless to the naked eye, people who use Lean experience a variety of adverse symptoms, including:

Codeine is responsible for the calming euphoria which users intend to feel while drinking Lean. Many of the adverse reactions associated with Lean are directly related to the inclusion of codeine in the mix. Many users seem to disregard the fact that codeine, although prescribed, is still an opiate.

Taken alone, the effects of codeine use include:

Codeine can become addictive as easily as other opioids. Over time, consumption of Lean can cause users to grow tolerant of the drug, thus requiring more codeine to experience the same effects. Users will also endure more intense withdrawal symptoms over time. This could lead to “maintenance use,” or simply consuming the drink to prevent withdrawal, and never achieving the desired effect.

In the past, opioids were a staple in medicinal pain management. Federal and state regulations have begun placing limitations on prescription opioids for pain management in an effort to combat the epidemic of opioid addiction in America.

How Long Does Lean Stay in the Body?

The effects of Lean can last as long as it takes for your body to metabolize the concoction. The half-life of codeine—the time it takes for the body to metabolize the drug in half—is approximately 2.5 to 4 hours based on normal metabolic activity. Since Lean is taken orally, the kidneys will do most of the work to flush the drug from the user’s body.

Certain factors influence the time it takes for Lean to completely leave the body, including:

In the event of a drug test, a urinalysis will detect codeine in a person’s system for an average of thirty-six hours after use. Saliva tests can detect codeine as long as two days after use, and blood tests show codeine for about twenty-four hours following use. Hair follicles hold codeine for the longest period and may be detected there up to ninety days following use.

Opioid overdose and death are a public health crisis in the US. The Center for Disease Control and Prevention (CDC) reports a steady incline of opioid overdose deaths from 8,048 in 1999 to 70,237 in 2017. This is due in part to carelessness of prescribers and the consequent upward trend of opioid addiction.  Lean is likely to cause overdose because it is often consumed in large doses.

Signs of Lean overdose include:

In the event of overdose, it’s important to call 911 and have information ready for medical staff. Disclosing the ingredients, amount (if known), and time consumed can help physicians provide life-saving care. An electrocardiogram (ECG), chest x-ray, IV fluids, and activated charcoal (or opioid-reversing Naloxone) will be administered. Additional breathing support and other stabilizing procedures may be necessary.

Lean in the Media

Lean is among the most glamorized forms of opioid abuse. This is due in part to its integration into mainstream imagery, whereby a purple drink is glorified by influential people. With opioid misuse doubling over the past ten years, it’s pertinent that the public recognizes Lean’s potential for becoming normalized, thus adding to the opioid epidemic the US is currently facing.

Some instances of famous people who have fallen victim to the drug include:

In a two-week 2016 study by JMIR Public Health and Surveillance, over 50 percent of hashtags on Instagram which included #codeine accompanied an image of Lean or contained additional tags which indicated Lean use. The openness of Lean use warrants a further look into how the public perceives the dangers involved in Lean abuse.

Treatment for Lean addiction is similar to treatment for other opioid addictions. There will be a period of withdrawal, detox, and eventual behavioral therapies. Withdrawal from opioids can be particularly uncomfortable for an average of seventy-two hours and will then slowly begin to taper after peak withdrawal. Discomfort can be lessened with the use of medically monitored and medicated withdrawal.

Symptoms of opioid withdrawal include:

The effects of opiate withdrawal are perceived by patients as the hard part. Once the physical addiction is eradicated, however, behavioral health becomes the top priority to prepare for sobriety after rehab. Depending on the level of addiction, patients may undergo short-term (fifteen to thirty days) or long-term (sixty to ninety days) for treatment. To aid in recovery, additional outpatient therapies and sober living housing may be utilized.

Lean Addiction Can Be Treated.

Lean addiction may seem benign compared to its more powerful opioid counterparts; however, the risk is just as high for overdose death. If you or a loved one is struggling with Lean addiction, now is the time to get help. Our friendly staff is here to help you find answers and resources to help you on the road to recovery. Don’t hesitate—contact us today.