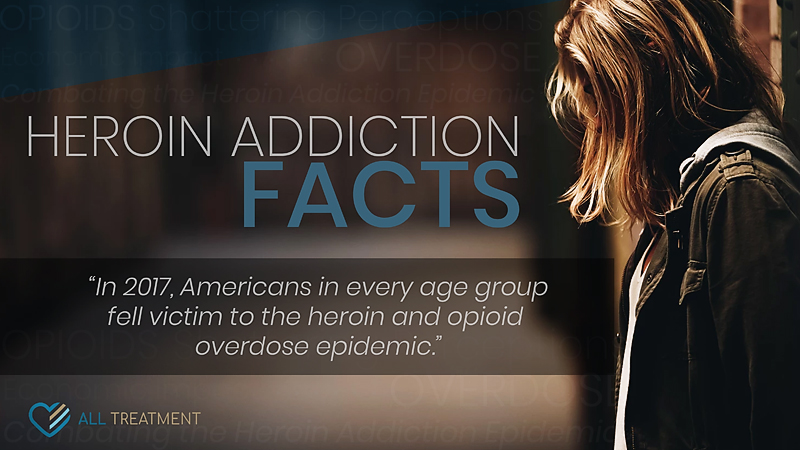 Heroin endures as one of the most dangerous and addictive substance abuse threats facing the United States and is a primary driver of the year-after-year uptick in overdose fatality. Data from the Centers for Disease Control and Prevention (CDC) reports that heroin alone killed 15,482 Americans, accounting for practically a third of the overall 47,600 opioid deaths plaguing the country that year. The drug has officially transcended antiquated cultural stereotypes as a problem confined to urban areas and has found its way into virtually every area of the country, including affluent suburbs.

From Teens to Seniors: Age Breakdowns for American Heroin and Opioid Overdose

The CDC reports that heroin addiction has more than doubled over the past decade among Americans eighteen to twenty-five. In 2017, Americans in every age group fell victim to the heroin and opioid overdose epidemic.

Data from the Kaiser Family Foundation reveals that in 2017, heroin and other opioids killed:

If there are any positives to be gleaned from these abysmal and tragic numbers, it’s that heroin overdoses from 2016 to 2017 remained relatively unchanged. Additionally, the CDC reports that In 2017, males from ages twenty-five to forty-four had the highest heroin death rate at 14.8 per 100,000, which was a decrease of 4.5 percent from 2016. Progress, however, has not been able to keep up with the need for institutional and community intervention.

Despite the long-held belief that heroin addiction disproportionately affected minority communities, recent data is quickly dispensing with this perception. Data from the American Council on Health and Science (ACSH) indicates that overdose deaths among Caucasians are almost 50 percent higher than African-Americans and 167 percent higher than Hispanics. In 2016, heroin-related deaths among Caucasians were approximately 25 per 100,000; deaths in the African-American community were 16 per 100,000; and fewer than 10 per 100,000 in the Hispanic community.

Understanding the cultural, behavioral, and institutional factors that contribute to addiction among these diverse communities, including access to treatment and affordability of medical care, is key to improving recovery outcomes among the national population and curbing addiction. Data from the Robert Wood Johnson Foundation Health and Society Scholar at the University of Pennsylvania indicates that African-American and Hispanic substance use disorder (SUD) sufferers are significantly less likely to complete treatment programs, largely due to socioeconomic factors.

Perhaps the most significant driver of the consistent uptick in United States heroin deaths is the rampant and alarming epidemic of prescription painkiller addiction. The CDC reports that 45 percent of those currently suffering from heroin addiction simultaneously abuse, or began by abusing, prescription painkillers like hydrocodone (Vicodin) and oxycodone (OxyContin)—and this is not a coincidence. The effects of these painkillers, of which there were fifty-eight written for every one hundred Americans, according to data from the CDC, are practically identical to pure heroin and create a dangerously similar high.

In the past few years, however, crackdowns and medical-industry reforms have made these pills more difficult to divert and harder to come by, which has driven up their prices. The average street price of an 80-milligram OxyContin tablet is between sixty-five and eighty dollars per pill, whereas a baggie of heroin can go for as little as five dollars. When a person who is abusing prescription painkillers becomes addicted and, like so many unfortunate individuals, finds themselves unable to afford these pills, they often turn to the much more affordable heroin as a comparable albeit incredibly dangerous alternative.

Where Does Heroin Come From?

Heroin’s journey to consumers is a long, sophisticated, and involved process that has been developed, organized, and monetized by cartels primarily situated in the following regions:

The drug originates from the poppy plant and is synthesized and refined into various forms, including liquid and powder products. Data from the Congressional Research Service (CRS) indicates that Mexican transnational criminal organizations are the major suppliers and key producers of most illegal drugs smuggled into the United States. Nationwide heroin seizures reached 7,979 kg in 2017, with 3,090 kilograms (39 percent) seized at the Southwest border. This is up from about 2,000 kilograms seized at the Southwest border a decade prior. Heroin can be produced in a number of purity grades (white powder heroin being the purest and black tar heroin being the least) and can be administered through numerous means (smoking, snorting, injecting, etc.).

The Economic Impact of Heroin

In addition to the very real human costs associated with long-term heroin addiction, this urgent and pervasive public health issue costs the country billions of dollars per year. Data from a study by the Center for Pharmacoepidemiology and Pharmacoeconomics Research and Department of Pharmacy Systems (and additional collaborators) reveals that the annual cost of heroin use disorder was estimated to be $51.2 billion as of 2015, which translates to $50,799 per American heroin user. These costs are completely unsustainable to an already beleaguered health care system and need to be offset by increased treatment, prevention, legislative, and law enforcement efforts.

The aforementioned statistical revelations, along with numerous others, reaffirm the common wisdom that heroin is taking an enormous and devastating human, financial, and legal toll. Efforts to reverse the course of this urgent and pervasive public health epidemic must be met with a comprehensive combination of compassion, common sense, and science. According to the 2016 National Survey on Drug Use and Health, there were an estimated 948,000 individuals who used heroin in the past year. if you or your loved one are counted among these ranks, there are more and more resources to help you get clean and find your way to recovery. Heroin use is a time-sensitive matter and can quickly turn to addiction. Don’t become another statistic. Get the help you need now.