True Liberation: Meditation, Mindfulness, and Recovery For All 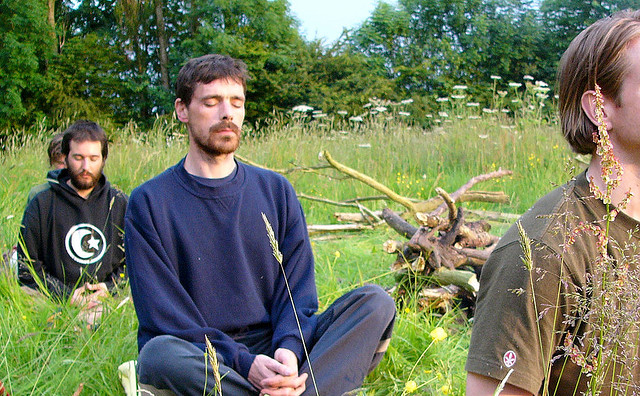 Can the 12-step recovery program be a spiritual path? Rabbi Olivier BenHaim, of Seattle's Bet Alef Meditative Synagogue, believes that it can. Discover his ideas about meditation and spirituality, and how they can be used to conquer addiction.

You are an addict.

Not to the bottle, the needle, or even creature comforts like junk food and entertainment – those addictions are secondary, sprouting from a single craving that we all have in common. For some of us, this root craving leads to smoking, drinking, or even obsessing over work to distract ourselves from reality. It is by turning our focus inward, often through meditation, that these compulsions can be avoided and a more peaceful disposition will develop naturally.

This is Rabbi Olivier BenHaim’s philosophy.

“Addiction to control – I also hear it as addiction to our own attachment to things as we want them to be,” he says. “That’s our main addiction. All of us are suffering from that.”

When you consider meditation’s fundamental purpose of removing us from our everyday thoughts and obsessions – relationship conflicts, rush hour traffic, evening dinner plans – it makes sense. Control is a highly valued state. But if everything is not controllable – and it isn’t – then we are left in a constant cycle of dissatisfaction, of scrambling in vain to fix each imperfect aspect of our lives rather than practicing acceptance and gratitude. We remain slaves to a false sense of stability. We are left with an addiction.

Rabbi Olivier sits in his office at Bet Alef Meditative Synagogue in the First Hill neighborhood of Seattle. Behind him is a bookshelf crowded with literature on Judaism, Buddhism, meditation practices, and 12-step programs. Each one has influenced the way he examines and interacts with faith and spirituality. Though he is a firm believer in Judaism, he doesn’t restrict himself to studying the teachings of a single faith, as in many ways, he explains, they are all intertwined.

But there are two specific intertwined concepts that struck Rabbi Olivier, sharpening his religious focus – and the connection may come as a surprise.

“Addiction to control – that’s our main addiction. All of us are suffering from that.”

About six years ago, a Jewish Family Service program was founded for addiction recovery anchored in the Jewish tradition. Rabbi Olivier connected with the program's founder because, for many years, Bet Alef was the only Jewish community that offered a 12-step meeting on Yom Kippur, the holy day of atonement.

“This is something that’s been going on for at least 16 or 17 years,” Oliver says, adding that the rabbi who founded Bet Alef was a therapist as well. The two started meetings in order for Rabbi Olivier to become better informed about Judaism and recovery. As their studies brought them to the popular 12-step program of Alcoholics Anonymous, the rabbi discovered that there are a striking number of connections between the 12 steps and the holy day cycle of Judaism, holidays that speak directly about the meaning of each point on the 12-step spectrum.

“As I learned about the steps, it kept happening: ‘Wait, but that’s like Passover!’ ‘But that’s like High Holy Days!’” he exclaims. “Each time people were telling me about this step and that step, it was like, ‘Wow, but that’s what we have; we’ve been doing this for thousands of years!’”

The rabbi discovered a number of interesting similarities in the Torah as well, explaining the biblical story as a reflection of our addiction to control. According to the Torah, after the Jewish people were enslaved by the pharaoh of Egypt, they came to accept that it was too painful for them to remain in such a state. They “hit rock bottom,” so to speak, just as addicts often do in their own lives. Rabbi Olivier connects this event to step one of Narcotics Anonymous: addressing the presence of an issue in one’s life that needs to be fixed, an issue over which one has become powerless.

“There are a lot of things that can be used to represent a higher power, but ultimately, the higher power is your inner, greater self.”

After this revelation on the part of the Jewish people, Egypt was swept by ten plagues – “negative miracles,” Rabbi Olivier calls them. “God took us out with an outstretched arm, because we couldn’t have gotten out of Egypt by ourselves. And that’s this idea that in recovery, you can’t do it on your own. It’s the higher power that’s going to help you out.”

It was around the time of this epiphany that Rabbi Olivier came across a book by one of his favorite teachers, Rabbi Rami Shapiro. The book is entitled Recovery – the Sacred Art: The Twelve Steps As Spiritual Practice, and it would eventually come to guide the course on meditation and addiction that he is currently facilitating. However, “it isn’t a 12-step book,” he insists. “It is a book that says, ‘Okay, we can apply these steps as a spiritual practice. This is a spiritual path.’”

Rabbi Olivier has been spreading this knowledge since January by co-facilitating a course entitled, “A Path of True Liberation: Recovery as a Spiritual Practice For Everyone.” The class meets monthly, each gathering focusing on a different part of the 12-step system and accompanying meditation practices.

There are currently 24 individuals in the class: some professionals, some Bet Alef attendees, and all members of the Seattle community. Rabbi Olivier estimates that half of his students are currently in recovery from drug or alcohol addiction. For the others, the class serves as a validation of what he believes people have always known about the 12 steps: that they are, in fact, a spiritual practice.

Dismantling the Myth of the "Crazy Mystic"

Indeed, Bet Alef embodies the concept of spirituality more than what most people envision when they hear the word “religion.” They’re likely to be the only synagogue in the world with the word “meditation” in their name. The concept of meditation as a pillar of the Jewish faith may seem radical, like a Buddhist yoga group meeting at a Mormon temple, but Rabbi Olivier insists that it’s absolutely fundamental. The barricade that has prevented such practices from entering the mainstream, he explains, is the religious hierarchy and their addiction (sound familiar?) to control.

“In all major religions, you’ll find those ‘crazy mystics,’” he says. “They’re always on the fringes. They say, ‘You want to go and meet God? Here are the practices. Close your eyes, start breathing, and inquire about the true nature of your self. Practice that long enough and you’ll remember who you are.’

"That’s it: you don’t need the rabbi, the priest, the imam, the pope. Anyone can have access to God.” When that access is tapped into in the framework of addiction recovery, the results can be liberating.

Meditation is about the creation of space: distance between the individual and their own thoughts and sensations. Most of our lives are lived in automatic, leaving mindfulness at bay.Rabbi Olivier explains it like this: “I have an itch, so I’m going to scratch it. I’ve been sitting like this for three minutes, so I’m going to feel uncomfortable and I’m going to start moving in my seat. Meditation helps you become conscious of these sensations… and the fact that you are not your thoughts.”

"That's it: you don’t need the rabbi, the priest, the imam, the pope. Anyone can have access to God.”

That’s one of the key concepts of 12-step programs: understanding that you are not your thoughts, your stories, or your past. Learning how to recognize and explore that distance is not explicitly identified as “meditation” in the addiction recovery realm, but Rabbi Olivier hopes to normalize that concept.

“When addiction comes in and overpowers you, it’s impossible to resist,” he says. “But if you are able to use meditation to build a method for not collapsing into that sensation – because most of what drives us is our cravings, our sensations – that little bit of distance gives you a little bit of freedom. If you’re not reacting immediately, then you have the possibility of choosing a different path.

“I believe that as much as there is an inner pharaoh in us, there is also an inner Moses. That inner force of liberation. There are a lot of things in our tradition that can be used to represent a higher power, but ultimately, the higher power is your inner, greater self. That’s where meditation comes in. That’s where you connect.”