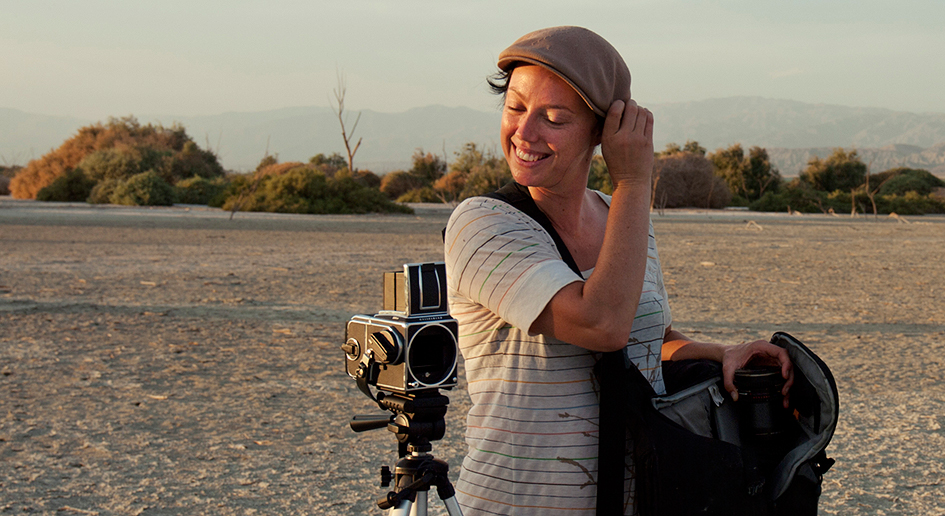 Claire Martin is a photographer from Perth, Australia. Her photography of derelict populations won her the Magnum Foundation 2010 Inge Morath award for Female Photographers under 30 years of age, and she has been recognized by several other foundations since beginning her personal projects in 2007. We have the opportunity to talk to Claire today about her experience of photographing these often overlooked communities.

AT: Thank you for taking the time to talk with us today about your photography, Claire.

AT: What first drew me to your photography is your focus on some of the marginalized populations of the world–drug addicts, poverty-stricken communities, prostitution, etc. You represent people who may not have the affluence to represent themselves. Do you feel it is your responsibility to represent them in any particular way?

CM: I think it is important when photographing people in sensitive situations to consider your motivations. Will your photo's further label them? The ethics of it are a difficult thing to negotiate. Personally when I photographed this work it was a gut response, I went with my emotions and senses. I studied social work (although I just did the degree – I didn't work professionally in this area) so I am aware of ethics surrounding situations like this. I am also naturally sympathetic to social issues and have a deeply engaged interest in these areas. As well as this I have had a lot of personal experience with addiction and have witnessed loved ones suffering with the condition. Because of this the work felt personal, and I also felt somewhat qualified to photograph it intimately, because of my personal understanding of the problem. The work was really a catharsis of sorts  – to try and understand the people I love who suffer the same problems a little more.

AT: “Downtown East Side” and “Slab City” represent similar sorts of people, but the moods are very different. “Downtown East Side” contains black and white photographs that primarily capture darker moments. “Slab City,” although blanketed in trash, is a far more colorful and cheery collection. Do these moods simply create themselves through the subjects you photograph? Do you have a role in creating them?

CM: The moods create themselves. I never anticipate a situation too much before I photograph it – because the point for me is to explore and learn something myself while I do it. So I look, I stay, I talk to people, ask them questions about their life, thoughts, musings etc, I photograph what I see and afterward I look at the pictures and think – what was that all about? Then I piece together my understanding of the situation. I thought Slab CIty would be a much more depressing place than it was. Ultimately the people I chose to photograph there were happy with the life they had made for themselves, this is why the photographs show that sense of cheer. They felt they had carved out a life on their own terms, where they weren't subject to societies definition of them.  It's difficult to separate yourself from your pictures though. It's possible I was feeling more accepting and had let go of a lot of judgement regarding addiction by the time I photographed in Slab City, and hence that is reflected in the photo's.

AT: Your captions suggest that you had some close interaction with the people you photographed. I’m thinking of, for example, the photo of Tony eating the cream pie you gave him in the album “Downtown East Side.” Did your contact with these individuals change the way you approached this project?

CM: I photograph in the documentary tradition more than as an objective observer, as a photojournalist would. The human  condition – the stories, the emotions are what interest me, more than the facts themselves. The project was about the contact with people. It was never really to objectively report facts. I want to understand people and understand what in their lives drives their choices. I have been really lucky to meet some people – like Tony, who really wanted to share their experience with me and my camera. It feels like a real coming together when that happens.

AT: How did they respond to you and your interest in photographing them?

CM: No matter what I'm photographing, or who, I think there is a ration of yes, no and maybe people. You get the people who instantly say yes, they're thrilled at the idea. You get the coy people, with a bit of work – you might be able to turn their maybe into a yes. And you get the people who look at you like your the biggest creep ever and it's a flat out no. I think it's about a ratio of thirds. With the maybe people, if you can let them know your intentions and if you're honest with them about what your up to, it helps.

AT: One of your photos (“Jugging”) shows a girl laying on concrete while a friend shoots her up with heroin through a vein in her neck. It’s hard to imagine photographing something like that. What exactly was that like?

CM: Things happened so quickly there. One minute I was talking to a girl about life in the downtown east side, the next she's saying, I'm about to meet my friend in the alley way to help out, do you want to come? And the next minute the friend is on the ground sucking her thumb while a needle is going into her neck. I just follow my instincts, and the lead of who ever I'm talking to and document what I see. If I'm not getting a bad feeling about the situation I just go along with the flow. I'm not there to make judgement, just to record.

AT: You mentioned in a previous interview that you like to show “yin and yang” in your work, a duality of “pretty” and “dark.” This is quite visible in your derelict photographs like “Downtown East Side” and “Slab City.” One example: “Street Vendor” captures a woman with a sort of run-down look about her, but there is something so simultaneously beautiful about this picture. To what extent are you able to compose this duality, and to what extent are these expressions natural?

CM: I'd say these expressions are natural. Ask me to make a contrived portrait and I'm terrible, I have no idea how to direct people, all I can do is let them do their thing – and hope I like what I see. That said, I grew up on a strict visual diet of high end fashion magazines. My mum was obsessed with them. I think sometimes, being a woman too, I just see that in a given situation, so that is when I press the shutter. I guess maybe a guy, or someone different would have chosen a different moment to record perhaps?  But more than that I think it's what the people "give off" it's a vibe that's there. I can't contrive it, I just see it. That particular woman was elegant and confident, it shows in the picture….

AT: While many of your photographs have tremendous artistic and compositional appeal, there is a social depth to these pictures that is just as prominent. What kind of effect do you hope these photos have on the public?

CM: Prejudice really makes me sick to my stomach. So often it's a senseless reaction to a given situation that is cultivated in a society. Be embarrassed by your neighbour the drunk, pick on the gay kid at school, be afraid of poor people, they're obviously dangerous. Reactions like this are condoned in our society, but they serve no-one and have no real purpose. They compound problems for people who in some instances are already marginalised. If I could have any effect with my photography it would be to cultivate changes in attitudes in society – to promote tolerance and acceptance – to advocate for those who don't have the tools to do it themselves.

CM: Just want to say thanks to you! Website's like All Treatment have been a great resource for me over the years and no doubt many people benefit from your online presence.

AT: Thanks again for sharing with us!

The collections discussed in this interview are avaiable for viewing here: Slab City and Downtown East Side.