The Dangers of Date Rape Drugs 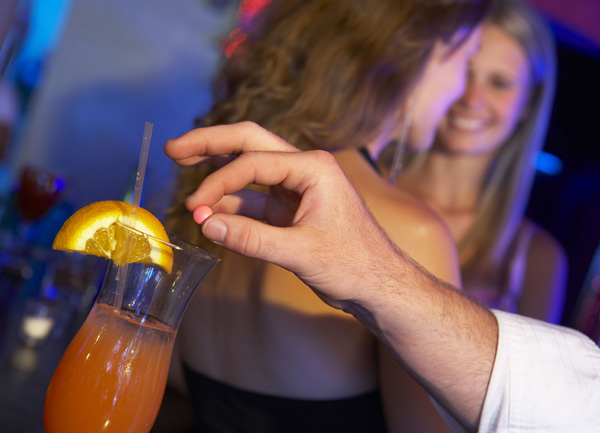 Resisting drugs and alcohol can be difficult at times, but what if you didn’t have a choice at all? Whether at a crowded party or simply hanging out with a few friends, the possibility exists that someone — even someone very close to you — may slip something harmful into your drink.

The category of intoxicants known as date rape drugs consists of any incapacitating substance that renders you incapable of saying "no." Most often, predators use the drugs to facilitate a sexual assault on an unsuspecting victim. Because date rape drugs are colorless, odorless, and tasteless, an assailant can easily spike a person’s drink or food without the victim even realizing.

These hazardous drugs may cause dizziness, disorientation, loss of inhibition, loss of consciousness, sedation, amnesia and even death. Due to the graveness of the drugs' horrific consequences, understanding the facts is extremely important in order to protect yourself from danger.

Like the tranquilizers Valium and Xanax, Rohypnol classifies as a benzodiazepine, causing effects such as: muscle relaxation or loss of muscle control, sleepiness, nausea, slurred speech, impaired motor coordination, confusion, blurred vision, loss of consciousness, and dizziness. Rohypnol’s profound and prolonged effects include sedation and blackouts for up to 24 hours, plus “anterograde amnesia,” which means that individuals may not remember experiences that happen while under the influence of the drug. In some cases, the drug can result in coma, convulsions, numbness, seizures, and even death.

Due to its notoriety as a date rape drug, Rohypnol’s manufactures re-formulated the substance so that a blue dye becomes visible after it is slipped into a drink. However, old versions and copycat drugs remain in circulation.

In its newest form, Rohypnol appears as an olive green, oblong tablet with "5Y2" imprinted on it. The older version looks like a small, white, round tablet capable of being crushed into a powder. Common street names for the drug include: roofies, roopies, roches, circles, and “the forget pill.”

Known on the street as liquid X, salt water, scoop, or “easy lay,” GHB acts as a central nervous system sedative. The drug can induce drowsiness, nausea, unconsciousness, seizures, severe respiratory depression, hallucinations, euphoria, feelings of affection, and coma. If combined with alcohol, the effects of the two depressants may be incredibly toxic and lead to overdose.

Although liquid GHB occurs most commonly, other forms of the drug include white powder and tablet. The strength of the dose varies depending on the form, but the effects typically begin within 10 to 20 minutes after consumption and last up to four hours.

Although most date rape drugs present no odor or taste, you may be able to identify a slightly bitter taste in your drink.

The anesthetic Ketamine (known on the street as “special K” or “vitamin K”) has been used medically as a sedative for both humans and animals since the 1970s. At high doses, the drug can create a dream-like state, delirium, blurred vision, disorientation, trembling, amnesia, impaired motor function, high blood pressure, depression, and potentially fatal respiratory problems. Loss of consciousness can occur for up to 18 to 24 hours, as well as recurrent flashbacks.

Though not officially deemed a date rape drug, alcohol frequently plays a role in cases of sexual assault, with its consumption making it difficult to think clearly and fight off physical attack. Choosing to drink alcohol should never be equated with "choosing" to be sexually assaulted; however, alcohol can impair your inhibitions, judgment, and decision-making skills.

How Can I Prevent Date Rape?

How Can I Prevent Becoming a Victim?

Although detecting a date rape drug may be difficult, employing a few precautions can easily help you avoid a potentially harmful situation. Before heading out to a party, always tell a friend exactly where you will be. Make sure you know the person throwing the party and determine if he/she can be trusted. If people you don’t know or trust crash the party, it may be smart to leave. Also, bring a friend along and if the party has alcohol, and make sure that one, if not both, of you remains sober.

Always be aware of your surroundings and listen to your instincts, as well as your body.

Don’t drink any beverage — including nonalcoholic ones — that someone hands you. Always watch your drink, never leaving it unattended and if someone offers you a drink from their cup, refuse it by pretending that you’re sick.

Always be aware of your surroundings and listen to your instincts, as well as your body. If you or your friend start to feel strange, it may be more serious than you think. Although most date rape drugs present no odor or taste, you may be able to identify a slightly bitter taste in your drink. So, if a drink tastes, smells, or looks abnormal, don’t drink it and leave immediately.

How to Take Action

Learning to be a savvy partygoer by understanding simple warning signs and how to take action will make socializing safer, easier, and way more fun. The effects of a spiked drink can take control in seconds and you may not realize what’s happening before it’s too late, so it’s important to act quickly and wisely.

If you feel strange in any way — nauseous, dizzy, disoriented — don’t hesitate to seek help. Call and text a friend close by, grab a taxi, dial 911 or call your parents — even if it means getting grounded, the alternative could be far worse. When calling for help, make sure to tell the person the address of where you are so they can find you in case you pass out. Never leave a friend in trouble if they start to feel funny or become incapacitated.

What to Do if You Are a Victim

Even if you remain sober and take precautions, getting slipped a date rape drug can happen to anyone. If you or a person you know might have been drugged and/or assaulted, know that it is not your fault, and seek help as soon as possible.

Immediately ask for assistance by notifying your parents and calling the police. Pursue medical and legal attention, and fully describe any and all symptoms to your doctor. Tell your doctor that you may have been drugged and get tested as soon as possible for the drug’s presence in your body. Rohypnol can be detected in the blood for up to four hours after ingestion and in urine up to 48 hours, whereas GHB typically lasts in blood or urine only 12 hours.

With that said, preserve any potential evidence: withstand from showering or brushing your teeth, place clothing items in a paper bag, and leave the scene untouched if possible. These steps will help police in the process of identifying and penalizing your attacker.

Rape, especially when it involves date rape drugs, can be severely emotionally traumatic. Such an act of violence and aggression may leave the victim in need of a professional who can help them deal with feelings of guilt, anger, and depression.

Fortunately, many crisis centers offer free counseling and support group services to help you through this difficult situation. Call the National Sexual Assault Hotline at 1.800.656.HOPE, or search for a local crisis center online.

And remember — whether you were slipped an intoxicant or not, date rape is never the fault of the victim. Understanding the drugs you may encounter is simply a step in the direction of self-protection.