What You Need to Know About the New Opioid, Dsuvia 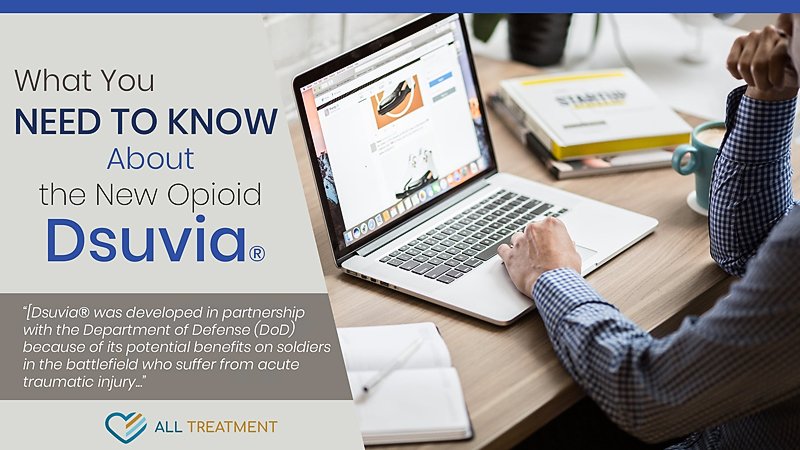 Dsuvia® is manufactured by AcelRx Pharmaceuticals and is administered sublingually (under the tongue) in a pre-filled applicator meant to be used in surgical environments, hospitals, emergency rooms, and other medical contexts for patients who are not responding positively to other means of pain management.

The approval comes despite tragic and alarming escalations in opioid-related fatalities, which reached nearly 50,000 in 2017, according to data from the National Institute on Drug Abuse. The agency also reports that there were 72,000 overall drug overdose deaths last year.
AcelRX claims Dsuvia will not be available in pharmacies or for outpatient use and that it is not meant to be used for more than 72 hours at a time. The company developed Dsuvia in partnership with the Department of Defense (DoD) because of its potential to quickly reduce pain for soldiers wounded in battle. The DoD claims the drug fills an “unmet need” and will be a valuable resource for American soldiers who sustain injury.

A New Formulation of a Powerful Drug

In its currently available form, Dsuvia is administered under the name sufentanil and is available only as an IV medication for patients in the hospital. Its new sublingual formulation is reportedly developed for patients who cannot take intravenous medication and are unable to swallow a large pill. The FDA also reports that Dsuvia will receive the same on-the-box warnings as other powerfully addictive opioids in an effort to prevent misuse and abuse. The European version of Dsuvia, Dzuveo, was approved by the European Union in June. The drug is expected to be released in the first quarter of 2019. Its approval is being met with mixed reactions.

Consumer advocates and many members of the medical community were quick to criticize the approval of Dsuvia, wondering whether the treatment landscape needs another incredibly addictive opioid painkiller, and whether the FDA and medical community at large can provide adequate safeguards against diversion and misuse. Many opponents of the drug are pointing to record levels of fentanyl-related deaths as the catalyst for the uptick in opioid overdoses and say the risks are just too great. Fentanyl-related deaths have increased over 540 percent over the past five years and show no signs of dissipating in the near future.  The reality is that federal regulators and prescribing physicians have proven less than effective in preventing diversion of such drugs as oxycodone, hydrocodone and, as previously stated, fentanyl; and have also largely failed to safeguard against diversion of maintenance drugs like buprenorphine and methadone.

These shortcomings combined with the unprecedented power and potency of Dsuvia have given many stakeholders a reluctance to embrace its green light from the FDA.

Protecting Yourself and Your Loved Ones From Opioid Addiction

As the regulatory landscape seems determined to approve more and more powerful prescription opioids, the only thing you can really do is be diligent to identify and prevent opioid misuse in your life, family, and community. This means being honest with yourself and others regarding your pain tolerance, using these drugs with discretion and in strict accordance with physicians’ orders, and stopping the second severe pain has subsided. Knowledge, discretion, honesty, and accountability are effective weapons against the devastating disease of opioid addiction. If you or someone you care about is struggling with or at risk for opioid addiction, get yourself into treatment and get the help you need now before it’s too late.