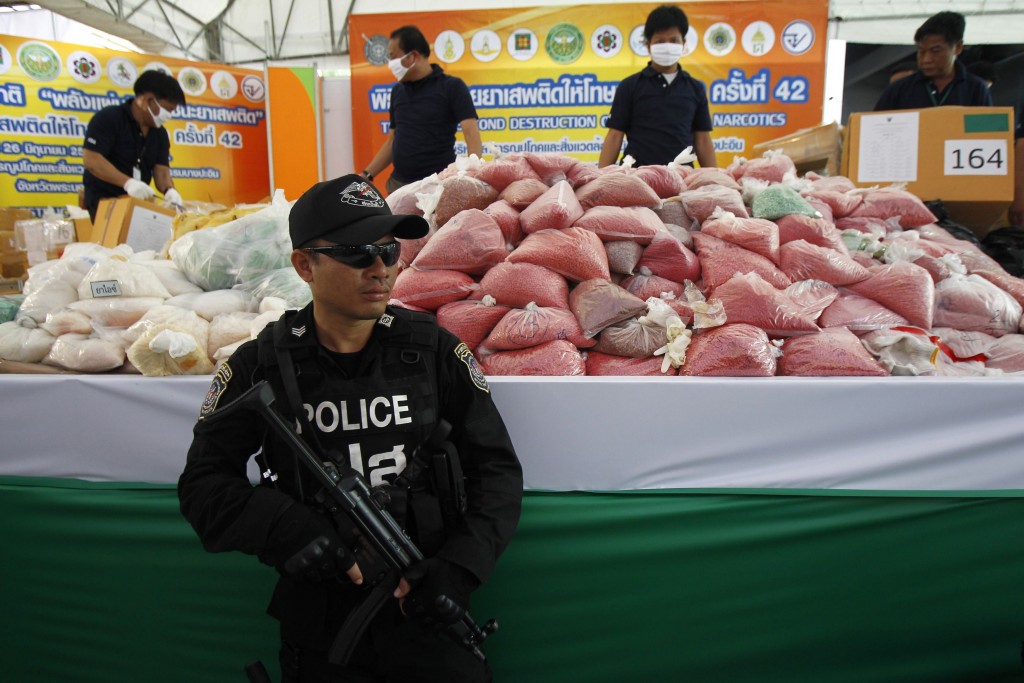 Yaba- literally translated, “crazy medicine”- contains a combination of methamphetamine and caffeine. Although the drug has maintained its popularity among adults in Thailand for ages, drug makers have re-marketed the stimulant in hopes of attracting a much younger clientele.

One of the many meth busts in Thailand

The redesigned pills now come in a beautiful array of colors- purple, pink, orange and green- and advertise flavors such as chocolate and strawberry in order to camouflage the bitter blend of drugs hidden inside.

“Yaba (producers) are trying to change their product to meet the demands (of) targeted groups,” reported Dr. Viroj Verachai- of the Princess Mother National Institute on Drug Abuse Treatment. “These flavors help the users take the drug more easily, but it could severely affect their (central) nervous systems.”

Dr. Verachai claims that roughly 75 percent of people seeking treatment at drug rehabilitation centers in Thailand consist of yaba users. This may be attributed to the fact that as the drug’s prevalence has increased, so has its potency making it exceedingly dangerous for adults and children to consume.

Another reason for Yaba’s high abuse rate comes from the drug’s lack of societal boundaries. The relatively inexpensive pills span throughout all class levels- from the factory worker struggling to stay awake at work to the socialite partying all night long. A 2011 report from the UN’s Office on Drugs and Crime estimates yaba is the drug of choice in Thailand, Cambodia, Laos, Brunei, the Philippines, Japan and South Korea.

As if the yaba epidemic wasn’t causing enough devastation throughout Thailand communities, one year after the 2011 report, the public health minister averaged that nearly 7,000 children aged seven to 17 had been rehabilitated for methamphetamine and caffeine use within the first half of 2012 alone. It appears as though yaba drug maker’s vibrant, candy-like packaging is working to attract the children.

Now, drug dealers are cornering the yaba market in other Asian countries as well with the number of methamphetamine and caffeine pills seized by police each year growing from 36,000 in 2008 to nearly 2 million in 2012, according to Bangladesh’s Department of Narcotics Control.

Clinical psychologist and director of the Center for Rehabilitation of Drug Addiction (CREA), Tarun Kanti Gayen, says, “drug peddlers or dealers who fuel the demand bring yaba, and young people rush into it and get hooked.”

Tarique- a 24 year old client of CREA- has been using the drug since the age of 14 and is now on his second stint in rehab. He reflects on the commodities growth, “Nowadays, everybody is selling yaba, you can find it across the street. Four to five years back it was rare, but now it’s dangerous: you can find yaba everywhere.”