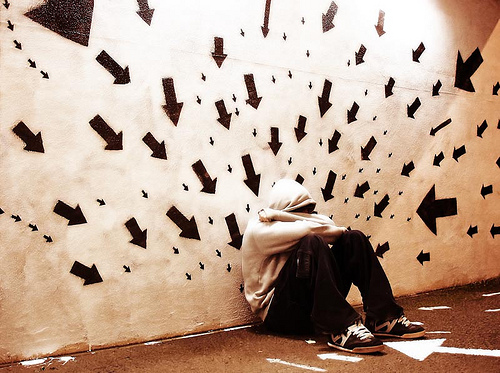 Anxiety is a reaction to stress that can affect both one’s physical and psychological health. Many experience anxiety as feeling an excessive range of emotions at once, characterized by prolonged worrying, mental uneasiness, physical tension, apprehension and fear. A wide variety of anxiety disorders exist within the health community, as they are among the most common mental disorders experienced by Americans.

An anxiety disorder primarily characterized by repetitive obsessions (distressing, persistent, and intrusive thoughts or images) and compulsions (urges to perform specific acts or rituals). It affects roughly around 3% of the population worldwide. The OCD thought pattern is often likened to superstitions insofar as it involves a belief in a cause-and-effect relationship that may or may not exist. For example, the compulsion of walking in a certain pattern may be employed to alleviate the inexplicable obsession of (perceived) impending harm.

Anxiety disorders affect about 40 million American adults age 18 years and older (about 18%) in a given year.

Another chronic disorder, but with symptoms that include brief attacks of intense terror and apprehension. These are often marked by trembling, confusion, dizziness, nausea, and/or difficulty breathing. Panic attacks abruptly arise and peak in less than ten minutes, but can last for several hours.

One of the more well known anxiety disorders, PTSD is often the result of a traumatic experience. Post-traumatic stress can result from an extreme situation, such as combat, natural disaster, rape, hostage situations, child abuse, bullying or even a serious accident. It can also result from long term exposure to a severe stressor, the most common example being soldiers who endure individual battles but cannot cope with continuous combat. Common symptoms include hypervigilance, flashbacks, avoidance, anxiety, anger and depression.

Social Anxiety Disorder often describes an intense fear and avoidance of negative public scrutiny, public embarrassment, humiliation, or social interaction. This fear is typically experienced in most (or all) social interactions, although it can be specific to particular social situations. Social anxiety often manifests specific physical symptoms, including blushing, sweating, and difficulty speaking.

Perhaps the single largest category of anxiety disorders, affecting 5% and 12% of the worldwide population. Victims of Phobic Disorder often anticipate terrifying consequences from encountering the object of their fear, which can be anything from an animal or location to a bodily fluid or particular situation. Sufferers understand that their fear is not proportional to the actual potential danger, but feel overwhelmed regardless.

Women are 60% more likely than men to experience an anxiety disorder over their lifetime.

Research into the causes, diagnosis, prevention and treatment of anxiety disorders continues to expand as an ongoing endeavor. Scientists look at what role genes play in the development of these disorders and are also investigating the effects of environmental factors such as pollution, physical and psychological stress, and diet.

Current evidence suggests that, like heart disease or diabetes, the complexity of mental illnesses most likely results from a combination of genetic, environmental, psychological, and developmental factors. In addition, several parts of the brain act as key factors in the production of fear and anxiety: the amygdala, which triggers fear and anxiety, and the hippocampus, which stores traumatic memories. By discovering more on the brain’s relationship with fear and anxiety, scientists may be able to create better treatments for anxiety disorders.

Other current research on anxiety disorders includes studies that address how well medication and behavioral therapies work, and the safety and effectiveness of medications for children and adolescents who have a combination of anxiety disorders and attention deficit hyperactivity disorder.

Anxiety disorders affect about 40 million American adults age 18 years and older (about 18%) in a given year, causing multiple feelings of fear and uncertainty.

Unlike the relatively mild, brief anxiety caused by a stressful event (such as speaking in public or a first date), anxiety disorders are often debilitating chronic conditions, which can be present from an early age or begin suddenly after a triggering event. Each anxiety disorder has different symptoms, but the symptoms cluster around excessive and irrational fear and dread. Often occurring at times of high stress, anxiety disorders are frequently accompanied by physiological symptoms such as a headache, sweating, muscle spasms, tachycardia, palpitations, and hypertension. This can lead to fatigue or even exhaustion.

When children suffer from a severe anxiety disorder, their thinking, decision-making ability, perceptions of the environment, learning, and concentration may be affected. They not only experience fear, nervousness, and shyness but also may start avoiding places and activities. If these children are left untreated, they face risks such as poor results at school, avoidance of important social activities, and substance abuse. Children who suffer from an anxiety disorder are likely to suffer other disorders such as depression, eating disorders, attention deficit disorders (both hyperactive and inattentive), and obsessive compulsive disorders.

In general, anxiety disorders are treated with medication, specific types of psychotherapy, or both: treatment choices depend on the problem and the person’s preference.

Medication will not cure anxiety disorders, but it can keep them under control while the person receives psychotherapy. Medication must be prescribed by physicians, usually psychiatrists, who can either offer psychotherapy themselves or work as a team with psychologists, social workers, or counselors who provide psychotherapy. With proper treatment, many people with anxiety disorders can lead normal, fulfilling lives.

Often people believe that they have “failed” at treatment or that the treatment didn’t work for them when, in fact, it was not given for an adequate length of time or was administered incorrectly. Sometimes people must try several different treatments or combinations of treatment before they find the one that works for them.

Antidepressants were developed to treat depression but are also effective for anxiety disorders.

The principal medications used for anxiety disorders include antidepressants, anti-anxiety drugs, and beta-blockers to control some of the physical symptoms.

You should feel comfortable talking with the mental health professional you choose. If you do not, you should seek help elsewhere.

Cognitive-behavioral therapy (CBT) has also shown effectiveness in treating anxiety disorders. The cognitive aspect helps people change the thinking patterns that support their fears, while the behavioral aspect helps people change the way they react to anxiety-provoking situations. CBT can help people with panic disorder learn that their panic attacks are not really heart attacks and help people with social phobia learn how to overcome the belief that others are always watching and judging them. When people are ready to confront their fears, they are shown how to use exposure techniques to desensitize themselves to situations that trigger their anxieties.

For example, a CBT therapist may encourage a person with a social phobia to spend time in feared social situations without giving in to the temptation to flee or to make small social blunders and observe how people respond to them. Since the response is usually far less harsh than the person fears, these anxieties are lessened. People with PTSD may be supported by recalling their traumatic event to a therapist in a safe situation, which helps reduce the fear it induces. CBT therapists also teach deep breathing and other types of exercises to relieve anxiety and encourage relaxation.

CBT or behavioral therapy often lasts about 12 weeks. It may be conducted individually or with a group of people who have similar problems. Group therapy is particularly effective for social phobia. There is some evidence that the benefits of CBT last longer than those of medication for people with panic disorder, and the same may be true for OCD, PTSD, and social phobia. If a disorder recurs at a later date, the same therapy can be used to treat it successfully a second time.