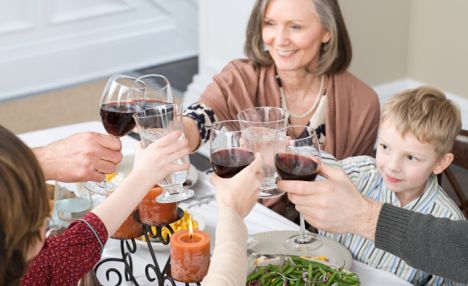 The biological and environmental causes that combine to produce alcohol addiction are complex and multifaceted. In the case of an individual alcoholic, it is extremely difficult for doctors to pinpoint a specific factor that led to addiction. That said, a genetic predisposition toward alcohol dependence is the single greatest risk factor for alcoholism.

Your Genes as a Risk Factor

According to the National Institute on Alcohol Abuse and Alcoholism, genetics account for nearly half of the risk for alcoholism. This does not suggest a strictly causal relationship between genes and alcohol dependence, however. Just as there are genes that can predispose an individual to alcoholism, there are genes that can deter an individual from problem drinking. Take the “Asian flush” phenomenon. A significant portion (estimates range from 30 to 50 percent) of people of Chinese or Japanese descent lack an enzyme involved in the metabolization of alcohol. Individuals with this enzyme deficiency experience a warm flushing of the skin, among other uncomfortable symptoms, when they drink alcohol. Scientists point to this “alcohol allergy” as a reason for lower rates of alcoholism among Asian populations.

The results of a study conducted by researchers at the University of Colorado-Denver suggested that separate genes regulate alcohol consumption and alcohol dependence. An individual could be predisposed to drinking heavily but not becoming dependent, or drinking relatively little and still becoming dependent. Thus, there is no single pathway to alcoholism.

It is crucial to remember that genes do not operate in a vacuum. Genetics must interact with the environment to create a particular outcome. For individuals with a genetic predisposition toward alcohol dependence, certain behaviors are red flags for future problems.

An individual with a genetic predisposition toward alcoholism is not simply fated to lose himself to the bottle.

An alcoholic is made, not born. In other words, an individual with a genetic predisposition toward alcoholism is not simply fated to lose himself to the bottle. Rather, his life experiences will ultimately determine his relationship with the substance. For individuals with alcoholism in their genes, a number of factors can predict future dependence. Here are the important ones:

Preparing for the Worst

Parents who are recovering alcoholics or who grew up in alcoholic home environments oftenfear passing on these genes onto their children. Unfortunately, their concerns are not unfounded. Communication is key in preventing the development of alcohol dependence. When children with a genetic predisposition toward alcoholism reach early adolescence, their parents should be open with them about their family history. In the event that the child of an alcoholic becomes dependent on alcohol, the addict and his loved ones need not feel shame or failure. Research has shown that genes can influence how an individual responds to different treatment methods. Each year, specialists are making breakthroughs in developing more efficient methods for treating alcoholism. Help is out there.