It’s Not Always Sunny in Philadelphia: Jeffrey Stockbridge’s Photoblog Chronicles a Dark Corner of the City 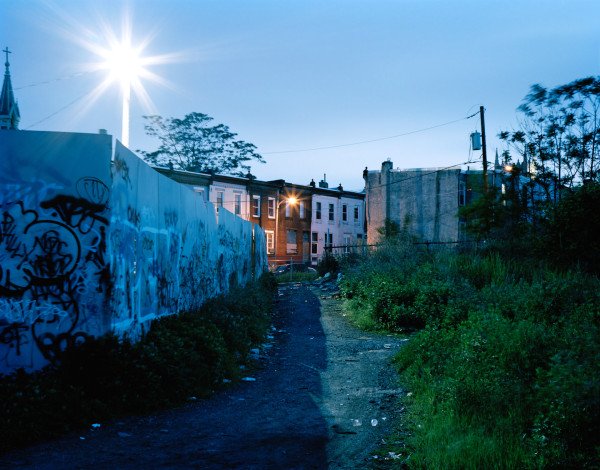 Under the El train in Northeast Philadelphia resides a bleak, almost post-apocalyptic community made up of prostitution, drug use, abandoned houses, poverty and high crime rates. Unseen and unheard of by most, Kensington Avenue is a community hidden away from the mainstream majority, though in reality, a similar area exists within every urban city.

Kensington Blues, a photoblog started by Jeffrey Stockbridge in 2008, chronicles the inhabitants of Kensington Ave. Largely populated by drug users and dealers, Stockbridge fell into the idea of photographing these locals while working on a project focused on nearby abandoned homes.

“I first learned of Kensington from a woman I photographed in West Philly. I was working on a different project at the time, documenting the interiors of abandoned houses and the people who adopt them as shelter,” Stockbridge told me in an interview. “I met a woman named Millie. She was selling sex for drugs and told me all about Kensington… Once I arrived, I knew I had a project here. There were countless women standing on corners working as prostitutes. Drug dealing was happening all around me.”

What sets Stockbridge’s project apart from others with a similar theme of despair and hopelessness intertwined with drug use is he has the subject tell their story, which eliminates the viewer from inventing their own naive, cliche version. Some portraits include a voice recording of the subject explaining how they wound up on Kensington Ave. Others are paired with a personal journal entry, the handwriting at times resembling that of a kindergartner, but telling the story of someone who has lived many lives and suffered many pains.

“Many people tell me outright that they want their story to be heard by as many people as possible,” Stockbridge said. “They want to discourage others from going down the path that they did. They want to help others who are going through the same shit they are. Sharing honest accounts of the hard lives many are living in Kensington has the ability to empower both the storyteller and the listener. It’s cathartic.”

Besides providing a platform for those struggling under the El to share their hardships, Stockbridge humanizes and individualizes these men and women and, in turn, forces us to realize these subjects could be someone we know or even ourselves. They are people who have, in most cases, turned to drugs to erase past pains and are too “caught in the grip of their addiction” and too concerned with avoiding dope sickness to actualize a different life. It is nearly impossible for someone who has never been in this state of numb hopelessness to understand the difficulty of escaping it, of getting and staying clean and starting a whole new life, but Stockbridge does an excellent job of giving viewers an inside look and a bit of understanding.

“I hope the blog will show people the reality of drug use and in turn encourage them to avoid using drugs,” he said.  “It’s so important for people to understand that drugs are just a short-term fix for your problems. In the end, they just make your life more difficult. There is something equally sad and beautiful about that difficult life. About the people who struggle to get by while perpetuating their suffering.”
Although Stockbridge recently shot his last picture for Kensington Blues, he has a backlog of hundreds to keep him busy posting and soon hopes to compile them into a book.
Call Now 24/7