Cocaine’s Effects on the Digestive System 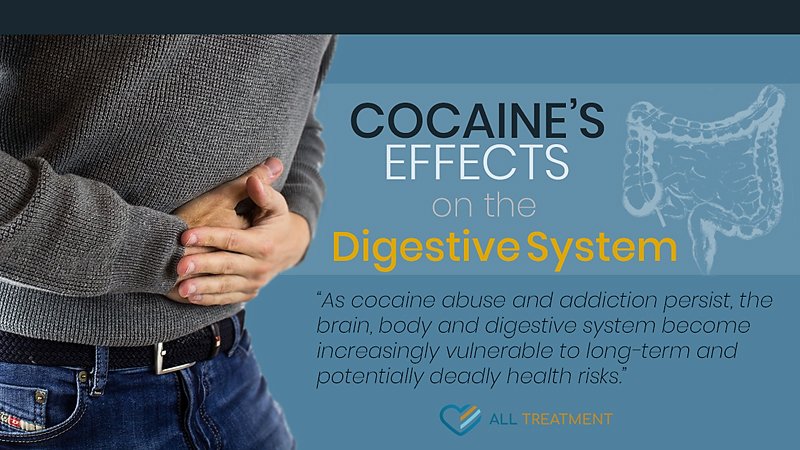 Prolonged and untreated cocaine abuse creates serious and potentially permanent changes in the brain and body. While cautionary language about the drug frequently focuses on its impact on the brain and heart, one of the lesser-discussed areas that cocaine affects is the digestive system. If these effects, as well as cocaine addiction itself, are left untreated, it can lead to serious long-term health issues and even death. Cocaine abuse leads to short-term and long-term digestive issues that require treatment as soon as possible upon onset. These symptoms aren’t normal, they are not inevitable, and they will not pass with time if left ignored.

Digestive symptoms commonly associated with cocaine are prime indicators of excessive abuse and addiction. They often occur alongside other withdrawal symptoms and can seriously disrupt users’ everyday quality of life.

Some of the more common short-term effects of cocaine abuse in the digestive system include, but are not limited to:

The digestive system is particularly vulnerable to cocaine abuse when cocaine is taken by mouth, whether it’s smoked as crack or swallowed through other unorthodox methods. These gastrointestinal symptoms must be addressed immediately and treated as part of a comprehensive cocaine addiction treatment program.

As cocaine abuse and addiction persists, the brain, body, and digestive system becomes increasingly vulnerable to long-term and potentially deadly health risks. Long-term gastrointestinal effects can create a variety of life-threatening health issues, including ulcer, abdominal bleeding, sepsis, and more. Sudden collapse and death has been reported in “body packers” who swallow cocaine-filled condoms in an effort to smuggle the drug through customs. The most common and prevalent long-term cocaine-related digestive issues are acute ischemic syndromes (lack of blood flow). Cocaine-related ischemia is caused by intense activation of alpha-adrenergic receptors in the mesentery (intestines, liver, stomach and colon) and can lead to ulcerations, gangrene, colitis, and the perforation of the large and small intestines.

Like any other type of medical issue, different levels of cocaine-related digestive effects require different types of clinical intervention. Short-term, more temporary issues may be able to be treated by everyday pharmaceutical remedies – however, long-term and more severe issues may require a more in-depth type of medical intervention, up to and including surgery.
Intestinal gangrene, for example, is going to require assistance well beyond over-the-counter stomach medications. Cocaine impacts the digestive system when cocaine abuse constricts the intestine, killing sections of it and paving the way for gangrene and other issues. The common blood clots that are also associated with cocaine abuse can also lead to death of intestinal tissue.

drugabuse.gov – What is cocaine?