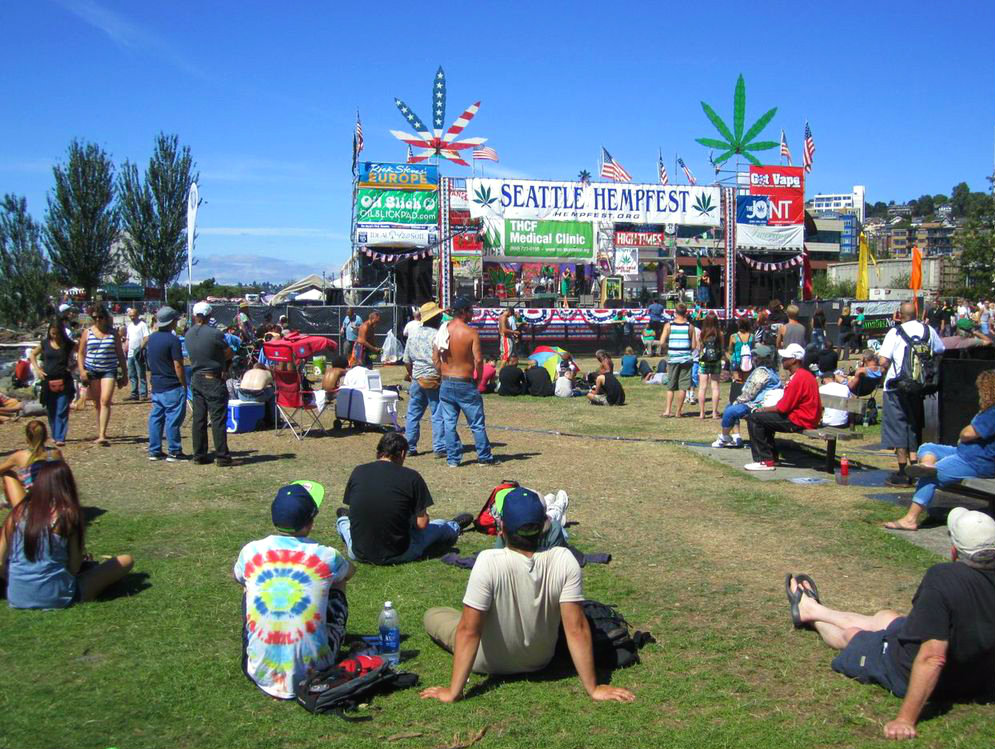 AllTreatment ventured out to the Seattle waterfront for this year’s Hempfest, an annual "protestival" for the legalization of marijuana. Our weekend: cannabis education, drug law discussion, and Dorito-covered fingers (courtesy of the SPD).

Thousands of college kids lay languid on the grass, giggling over spliffs and curly fries. Crow’s feet crinkled around the eyes of old hippies munching on hemp burgers and ice cream. A cloud of smoke wafting over 1.3 miles of fairgrounds preoccupied the more carefree attendees from what others knew to be a pressing reality: in light of two states’ recent marijuana legalization, this year’s Hempfest would be crucial.

“The eyes of the whole world will be on Washington to see how this law unfolds,” said Steve DeAngelo, Executive Director of Harborside Health Center in Oakland, Calif., at a press conference Hempfest’s opening day. “To see whether it provides a benefit not just to people who use cannabis, not just to people who rely on cannabis for medicine, but to the entire community.”

“Without a federal solution, nothing’s going to work. We need to get enough bricks out of this wall to make that mother****** fall down.” -Douglas Hiatt

That law is Initiative 502, a bill that passed in Washington state nearly a year ago allowing the possession of up to an ounce of marijuana for residents over 21. The legalization is new, but Hempfest—an annual event drawing hundreds of thousands for the legalization and celebration of cannabis—has been a Seattle tradition for 22 years.

Despite age and transaction limits accompanying the recent initiative, this weekend saw Myrtle Edwards Park crawling with people of all ages. Many were openly enjoying—and freely distributing—small amounts of marijuana. Police were in attendance, but rather than writing tickets and making arrests, they conversed with attendees and even distributed bags of Doritos. Their collaborative attitude marked a solidification of what the SPD agreed long ago to be their lowest law-enforcement priority.

“Knowing that pot is legal, it’s like this giant weight has been lifted,” said Jess, a Seattle native who has attended Hempfest for the past four years. “You can totally feel a difference in the atmosphere…it’s like a big celebration.”

While it may have been all fun and games to droopy-lidded celebrants, six stages of speakers emphasized that there was still work to do. This year's theme:

“Ignorance is not bliss. We can’t wish away this problem, and ignoring the conflict doesn’t make it any less real.” -Kari Boiter

“We think it’s time to take marijuana off the federal schedule entirely, like alcohol and tobacco,” said Vivian McPeak, Hempfest’s founder and executive director. “That’s pretty much the end game. As long as marijuana is a control-one federal substance, it is not legal in any of the 50 states on a federal level, and anyone can go to jail or prison at any time for marijuana.”

Speaking at Friday’s press conference, Kari Boiter—a self-described champion for drug war prisoners—shared harrowing accounts of families in Washington and across the country facing indictment for the growth and possession of medical cannabis. Boiter’s message: “Ignorance is not bliss. We can’t wish away this problem, and ignoring the conflict doesn’t make it any less real.”

Boiter called for the U.S. Attorney General to “slash the $83 billion budget for imprisonment in this country…by demanding the immediate release of every prisoner who is being held for a cannabis crime.” He added that hundreds of children could be put through school using those funds.

Criminal Defense Attorney Douglas Hiatt chimed in on the matter: “Without a federal solution, nothing’s going to work. We need to get enough bricks out of this wall to make that mother****** fall down.”

“We’re not some group of freaks who just want to blow smoke in your face. We want to be part of the system." -Keith Stroup

On Hempfest’s less political front, the three-day festival was host to hundreds of food vendors and head-shop stands. Amid the buzz of marijuana fans grazing on fried delights and putting shiny new pipes to use, another sound could be heard: the cry of dozens of cannabis advocates calling for freedom. This group included representatives from NORML, one of the leading organizations in American drug law reform.

Rallying for a Cause

Some came to Hempfest to toke up with comrades. Others came to marvel at Seattle’s marijuana culture. As in years past, only a small demographic appeared to be there for its intended purpose: to rally for full legalization, voter and representative participation, and ultimately, citizen freedom.

“There’s just something about getting that many people together to make a political statement that is exhilarating, intellectually and politically,” Stroup said. “You can feel it, almost—it’s like, I’m not alone.”

Added DeAngelo: “I go to dozens of events, many of them cannabis events. I’ve never been to one that was as tightly organized, as smoothly executed, and carrying the kind of intention, sensitivity, compassion, and beauty that this one does.”

And perhaps they’re right. As the sun beat down over police exchanging handshakes with the red-eyed and orange-fingered, none could deny that Hempfest 2013 was a demonstration of community—and activism—in action.