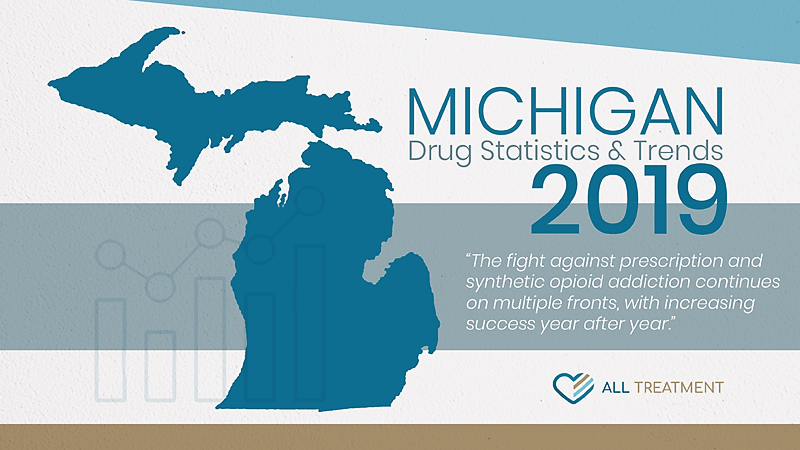 The state of Michigan continues to be beset by a diverse and dangerous variety of substance abuse threats. These substances pose an enduring and consistent threat to Michigan residents’ physical health, emotional wellness, and overall quality of life. In 2017, the last reported full year of drug statistics and trends by major organizational authorities and government state and local agencies, 2,694 Michigan residents succumbed to fatal overdose, according to data from the Centers for Disease Control and Prevention (CDC). This represents an increase of 82 percent over five years, and these deaths now exceed the combined rates of deaths from traffic accidents and firearms. Developing sound and realistic prevention and treatment plans require knowing the scope of current Michigan drug trends and statistics. With that in mind, let’s take a look at Michigan’s major drug threats in 2019.

Michigan continues to have one of the highest rates of heroin addiction in the country. Data from Michigan’s Department of Health and Human Services reveals that in 2016, the most recent comprehensive tally available, there were 732 deaths and 25,910 treatment admissions specifically attributable to heroin overdose. Wayne County ranked the highest in heroin-related deaths with 84. Experts are expecting heroin-related deaths to exceed 1,000 by 2020 if proper intervention is not taken.

In addition to fatality, heroin continues to pose a significant public health issue to vulnerable residents. The aforementioned report also shows that heroin and other types of injection drug use is linked to 64 percent of Michigan’s hepatitis C cases. As part of a movement toward harm reduction, many disease-prevention advocates have been lobbying for what is called “syringe access/needle exchange program,” which provides clean syringes and miscellaneous supplies at no cost via an anonymous and judgment-free exchange.

These facilities cut help mitigate public health risks associated with the use of contaminated needles.  While heroin addiction in Michigan continues to be a major public health issue, it is only part of a complicated and problematic mosaic of substance use issues plaguing residents.

Like other areas of the country, Michigan has deeply felt the pain and tragedy of the American prescription-opioid crisis. Although prescription painkiller rates in Michigan have decreased 11 percent, these medications continue to be the leading driver of opioid-related deaths among its residents, according to a comprehensive report from Michigan State University on the Health Policy for the incoming gubernatorial administration.

Data from the CDC indicates that there were 633 prescription opioid overdose deaths in 2017. Perhaps the most alarming statistic related to opioid deaths in Michigan is the revelation that residents ages fifty-five and over are at the highest level of risk. However, the good news is that the prescription opioid fatality rate is declining, with deaths falling over seven percent from the previous year.

And yet when we examine the growing synthetic opioid problem that Michigan is facing, the picture gets less optimistic. The Michigan Department of Health and Human Services reports that in Wayne County alone there were 690 fentanyl-related deaths. The agency also reports that the victims of fentanyl and other synthetic opioid-related deaths were overwhelmingly white males, accounting for 63 percent of all fentanyl deaths in 2016.

Carfentanil[DN1] , another synthetic opioid even more powerful than fentanyl, is commonly used as an elephant tranquilizer and has been linked to more and more deaths, specifically in Wayne County, where batches of carfentanil-laced heroin are becoming increasingly prevalent. Data from the CDC indicates 971 synthetic opioid-related deaths in 2016, representing half of all opioid overdose fatalities for that year.

Reversing the Course of Prescription Opioid Abuse in Michigan

The fight against prescription and synthetic opioid addiction continues on multiple fronts, with increasing success year after year. Michigan’s Department of Health reports that more than 60 percent of Michigan pharmacies have registered to dispense naloxone (Narcan) and have dispensed well over ten thousand orders of the drug. About a third of these orders resulted from state directives, and the rest resulted from prescriptions from physicians. The Michigan Department of Licensing and Regulatory Affairs reports that dispensation of prescription opioids throughout the state have decreased by more than 10 percent, and dispensation of Schedule 2 Controlled Substances fell by more than 7 percent.

Some of the key findings from the state’s 2017 Drug Utilization Report include the following:

For the first time since 2011, the total number of controlled substance prescriptions dispensed in Michigan fell below twenty million. Updated reporting from the Michigan Automated Prescription Drug System (MAPS) and other advancements have made it easier to track and report prescription dispensation rates throughout the state. Additionally, recommendations set forth by Governor Rick Snyder to increase training for prescribing physicians and a comprehensive public relations campaign around the risks of prescription drug abuse have also helped move the needle toward a decrease in death and dependency.

There are currently more than thirty thousand registered users of the new MAPS, a number that increased considerably with the advent of Public Acts 248 and 249, which require all prescribers of Schedules 2 through 5 Controlled Substances to register with the system. State law also now requires any physician prescribing a supply that exceeds three days to consult MAPS first.

While the state diverts more and more of its attention and institutional resources toward heroin and other opioids, a steady and consistent cocaine addiction threat continues to plague many Michigan residents. Deaths from cocaine, including singular presence and co-occurring presence with opioids, have remained an issue throughout the state. In Washentaw County, for example, local officials report that cocaine deaths involving opioids have increased more than 50 percent.

And similar to other areas of the country, Michigan has had increased difficulty with fentanyl finding its way into pure cocaine supplies, leading to a drastic uptick in overdoses. The DEA reports that the primary purpose of mixing cocaine with other opioids is a process called “speedballing,” which involves combining a stimulant such as cocaine with a depressant. According to data from Michigan’s Department of Health and Human Services, more than 4 percent of the state’s adolescent population has used cocaine at least once in their lives.

Also similar to the rest of the country, Michigan’s population remains deeply polarized about the actual risks of marijuana use. Data from the Substance Abuse and Mental Health Services Administration (SAMHSA) reveals that 12 to 16 percent of all Michigan residents engage in regular and consistent marijuana use, a number likely to rise with the recent passing of the Michigan Regulation and Taxation of Marihuana Act (MRTMA), which allows the personal use and possession of marijuana for Michiganders over the age of twenty-one.

Prior to passage of the law, one in twelve Michigan residents who were arrested in the state were charged with a marijuana-related offense, according to data collected by the Michigan State Police. While marijuana arrests dropped 15 percent from 2016 to 2017, arrest and incarceration continues to disproportionately affect the state’s African-American community. Black men ages eighteen to twenty-four are almost ten times more likely to be arrested for marijuana offenses compared to white women that age—despite relatively similar rates of use.

Researchers estimate that the taxation and regulation of marijuana will net Michigan around $883 million by 2025, while opponents of legalization claim that Michigan will follow suit behind states that have seen increased car accidents and other public health issues since legalization.

For years, methamphetamine (meth, crystal meth, etc.) has been a crisis in Michigan, and the problem has only grown worse. Increasingly potent product imported from foreign markets has ramped up use, addiction, and overdose throughout the state. County prosecutors all over Michigan are reporting upticks in felony arrests related to meth. Marquette County, for example, prosecuted more than one hundred meth felonies last year—more than 2016 and 2017 combined. In Wexford County, the amount of meth seized by police went from 12 to 439 grams in just one year.

Data from the Michigan State Police reveals that in recent years, laboratory seizures have been spread across the state. In 2016, there were a total of 495 arrests and lab seizures in the state for methamphetamine manufacturing, a 19 percent increase compared to 2015. During that same time frame, treatment admissions for meth in Michigan increased 49 percent. The majority of methamphetamine-related arrest in Michigan (more than 60 percent) continue to be for possession. The process of seizure, dismantling, and cleanup of meth labs poses a unique and urgent public health risk in and of itself due to the dangerous chemicals used to manufacture the drug.

Benzodiazepines (benzos) are prescription sedatives commonly used to treat anxiety and certain types of sleep disorder, which include common brand names Xanax and Valium. In addition to powerful opioid painkillers, benzodiazepines contribute to a multilateral prescription drug threat in Michigan that has only recently begun to dissipate. Data from the National Drug Early Warning System (NDEWS) reveals that, in Wayne County alone, which has the highest rates of overall overdose deaths in Michigan each year, benzodiazepines killed nearly one hundred people in 2016. The Ingraham County Health Department reports that co-occurring benzo and opioid use are an enduring and consistent health threat for many Michigan residents. Mixing alcohol with benzos is also especially dangerous.

As is the case across other areas of the United States, stimulant addiction particularly impacts Michigan’s adolescent and young adult population. Attention Deficit/Hyperactivity Disorder (ADHD) drugs such as Ritalin and Adderall continue to be primary drivers of use. While one recent University of Michigan study refutes the commonly held fear of cardiac arrest among children who use these drugs, there are a variety of other health risks to consider, including but not limited to impaired neurobiological development. Data from the National institutes of Health’s (NIH) 2017 Monitoring the Future Survey indicates a national decline in the adolescent use of stimulants. Prevention advocates throughout the state have striven to prevent diversion and subsequent abuse by organizing safe-disposal initiatives and lobbying for increased treatment resources.

A Long Road Ahead

Michigan’s 2019 drug trends represent a multilateral and complicated mosaic of public health issues that require increased buy-in and intervention from all stakeholders, including state physicians, law enforcement legislators, treatment centers, and prevention advocates. While it appears as though these forces are coalescing to offer substantive and measurable changes to the state’s addiction epidemic, there is still more work to be done. If you or someone you care about live in Michigan and are battling drug or alcohol abuse, get the help you need now to avoid becoming a negative statistic. Help, healing, recovery, and a better tomorrow may be closer than you think.