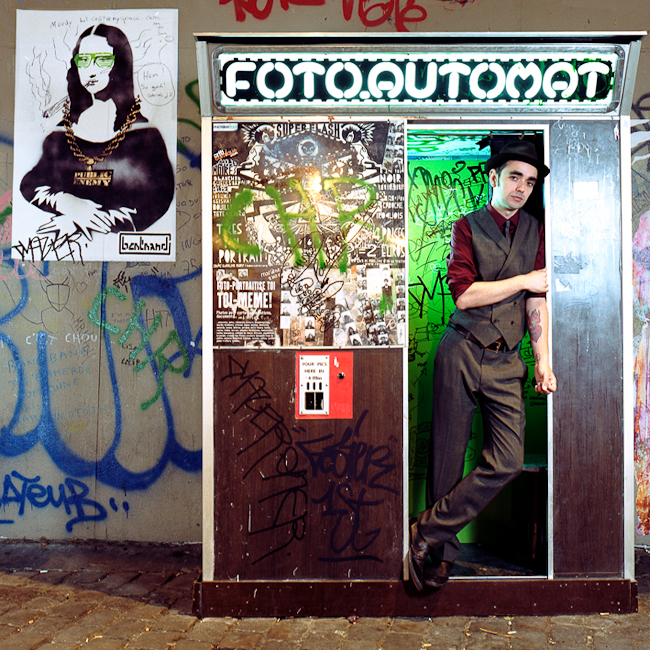 In the myriad of addiction writers whose novels line our bookshelves, Tony O’Neill stands out. It’s unsurprising that the UK native spent several years in the music scene: there’s an undeniably punk rock quality to his writing, raw enough to make you feel uncomfortable, yet studded with moments of arresting tenderness. The Digging the Vein author spoke with AllTreatment about writing as therapy, how heroin addiction influenced his career, and why Russell Brand should just stick to comedy.

Adrienne Hurst: Tony, thank you for taking the time to do this interview. Drug addiction is a common thread throughout your writing, and often you draw upon your own experiences for content – particularly in Down and Out on Murder Mile and Digging the Vein. When did drugs first become a part of your life?

Tony O’Neill: Probably my late teens. The thing is, I was always aware of and curious about drugs, even before I had actually tried them. As a teenager I devoured books by Bill Burroughs, loved the music of Iggy Pop, Lou Reed, Chet Baker. The idea of – as Rimbaud said – ‘systematic derangement of the senses’ was something I was already very interested in before I tried any mood-altering substance. But I grew up in a northern town where drug use was rife, be it glue, speed, alcohol, whatever. Many people around my age also tried them without having any romantic, preconceived notions about them.

AH: Having read several books written by authors who have experienced addiction, I was taken aback by the complete honesty with which you present heroin addiction in Down and Out on Murder Mile – both the literal and figurative highs and lows. Do you think that the typical addict writer is falling short, or failing to tell the entire story of addiction, by emphasizing the bad and ignoring what was “good” at the time?

TO: All I know is that I had no interest in writing a memoir. The writers I considered my literary antecedents were authors like Henry Miller, Alexander Trocchi, Dan Fante, William Burroughs, Charles Bukowski, etc. Not that I was trying to put myself in the same elevated position as them, but rather, I admired the way they used their own experiences and created something that wasn’t entirely fiction or non-fiction. The drug memoir, for me, is a pretty dull genre, and one that comes with its own inbuilt set of clichés. For one, I didn’t want to write as the ex-addict looking back. I wanted to record my impressions and experiences during that period of my life. I think that viewing those years through a lens of recovery would have been a mistake, and would have made that book and the one that preceded it (Digging the Vein) just another junkie’s memoir.

The only drug memoir I thought succeeded entirely – and again, I feel that this one owed more to the likes of Burroughs’ Junky than the typical modern drug memoir – was Jerry Stahl’s Permanent Midnight. And you can see that after that one Stahl went off and wrote fiction, so you can see his heart was elsewhere. If he had written that book in the 60's or 70's it probably would have been presented as a novel in the way that Post Office or Tropic of Capricorn were. The only modern writer I can think of who writes in this tradition, barring myself, is Dan Fante, who wrote the Bruno Dante trilogy – Chump Change, Mooch, Spitting off Tall Buildings, and 86’d.

AH: Unlike addicts who choose a 12-step or other such program for their recovery, you seem to have chosen a less black-and-white approach. What is your recovery philosophy? Do you view addiction as biological, psychological, a combination of both, etc.?

TO: In my view, addition is a physical phenomena. Now, we can talk about psychological dependence, which is an entirely different thing, but for me, addiction is when physical symptoms result in the drug being withdrawn. The language of addiction is used so fast and loosely now that it muddies the entire discussion. When I hear people talking about ‘marijuana addiction’ or what have you, it makes me want to bang my head against the wall. Sure, some people may feel that they are psychologically dependent on smoking marijuana, in the same way they may feel psychologically dependent on watching TV, having sex or eating sugar… but they are not addicted.

Mostly, addiction is a matter of exposure. If you take opiates long enough, you will become addicted. If you smoke tobacco or ingest alcohol for long enough and in great enough amounts, you will become addicted. Also, you can become addicted and never become psychologically dependent. Someone could be prescribed massive doses of painkillers after an operation, and they may experience physical withdrawals once they come off their meds… but unless they continue to seek out opiates afterwards, that doesn’t make them a junkie. That person has been addicted, and now they are no longer addicted. The psychological part comes in the how and why you used the drug. If you use anything and associate it psychologically with pleasure, then over time your brain will become hardwired to expect it. It’s a purely Pavlovian response. I do not believe that once you are an addict you are an addict for life. I do not believe that if you are a recovering alcoholic you cannot smoke marijuana or use opiates in a medically responsible manner. I do not believe that once you have been a heroin addict, you can never drink or smoke marijuana again, either.

AH: As indicated in your books, you have seen or experienced just about every kind of horror imaginable in the drug scene. As is the nature of addiction, however, the drug use continued for many years. Was there a particular time or experience that made you decide to stop using?

TO: Having a child did it. I knew that I was the kind of person who could not use heroin socially. There are very few people who can. I also knew that I could not balance being a good father with being a heroin addict. Both are full time jobs. I knew I wanted to be a good father more than I wanted to be a heroin addict, and that thinking was what initially led me to quitting methadone and heroin for the last time. Not that it was easy, and not to say I didn’t slip, but fatherhood definitely altered the course of my life for the better.

AH: The amount of writing you’ve produced in a short amount of time is impressive, especially considering that you wrote your first novel while on the methadone program. What was it like writing about your drug experiences while in the process of recovery? Do you consider writing itself to be a part of that process?

"I can’t think of my current life in terms of ‘being sober’ or it being a conscientious process of keeping away from heroin, otherwise I’d go crazy. That’s a huge part of why AA didn’t work for me."

TO: The trick was to never think of myself as being in a process of recovery. The only reason I remember my clean date is because it coincides roughly with the birth of my daughter. I find there to be something weird about the idea of sober birthdays and the like. The image I get is of someone in a prison cell, counting off the days on the wall. I can’t think of my current life in terms of ‘being sober’ or it being a conscientious process of keeping away from heroin, otherwise I’d go crazy. That’s a huge part of why AA didn’t work for me. Sitting around once a week, once a month, and talking about my ‘problem’ was a recipe for disaster as far as I was concerned. I need to live in the moment, and at the moment heroin is not a part of my day-to-day existence; writing is.

I will say that writing the first book was hugely therapeutic, though. There were many things that happened while I was using that I felt urge amounts of guilt about. They were the kinds of memories that if you dwelled on them too much they would drive you back to the needle. Putting it all down on the page, and being able to look back over my experiences with the dispassionate air of the narrator of my own life did more for me than any stay in rehab, any amount of AA meetings, or any one-on-ones with a shrink. It helped me to come to terms with those experiences and move on.

AH: A couple of your novels are described as “semi-autobiographical.” Could you comment on this choice?

TO: Well, I changed dates. I changed names. I deleted huge parts of my life where nothing interesting happened. I edited down a year into three months. The truth is, ‘life as it is’ is pretty dull. Every memoirist cherry picks the good or more interesting parts; I’m just a bit more honest about it. That’s why each of the books based upon my own experiences were billed as novels, not memoirs. Yes, all of these things happened, but I’m retelling them in a (hopefully) compelling and dramatic fashion.

AH: Do you have any new literary ventures in store for us?

TO: I finished a sequel to Sick City called Black Neon, which will be coming out in German first, as Sick City garnered quite a bit of attention out there and there was a real hunger for a follow up. I’m in the process of getting it put out in other languages now. I’m working on an autobiographical short story / novella based upon my experiences in the music industry… at the same time, I started a new novel, but I’m only 4 chapters in so it’s too early to say much about it except that it’s a case of ‘so far so good.’ I write every day. When the writing is going well, it’s a huge rush, as much fun as any drug. Almost.

AH: Is there anything else you would like to add?

TO: Yes, I’d like to get on my soapbox for a moment. Russell Brand should stick to comedy, and stop shouting his mouth off about methadone treatment. Methadone maintenance, coupled with a sympathetic doctor, can be a life-changing intervention for an addict. Even though my experiences with methadone weren’t great – I rarely managed to find the ‘sympathetic doctor’ part of the equation – I will say that methadone probably saved my life when I was at my lowest ebb, and provided me with the stability and breathing space to really take a look at how I was living my life and to consider changing. Uninformed people making ridiculous blanket statements like that do nothing to help addicts, and only serve to reinforce the worst prejudices of the ignorant. Rant over.