Hell Behind the Fences: An Interview with Maia Szalavitz 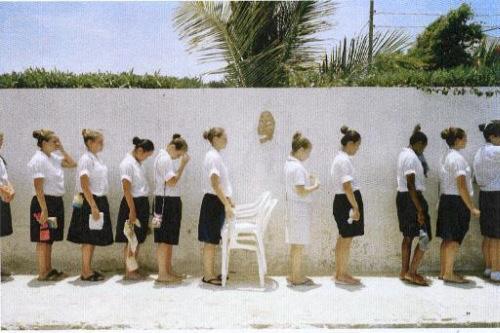 Institutionalized child abuse is occurring all over the United States. Journalist and activist Maia Szalavitz's groundbreaking book, Help at Any Cost, investigates the horrors that children and teens face upon entering certain residential treatment programs for addiction. Read on about the shocking practices that are happening right under our noses.

Josh Gordon: What inspired you to write Help at Any Cost?

Maia Szalavitz: I had an addiction problem of my own when I was in my late teens and early twenties, and I was horrified by the idea of tough love. I thought that putting myself in a situation where I’d be attacked, socially vulnerable, and humiliated would be what made me want to use drugs in the first place, not what would make me want to get clean. I wondered why this kind of horrible treatment was so prevalent. So I began to investigate. I was kind of amazed that nobody had ever written about this before, especially since there is no reason to believe that this stuff would help.

Could you describe to me what a “tough love” program consists of?

"They want to 'remold' you in this model of what they think a perfect child should be. It attacks critical thinking, it attacks your sense of self, it attacks all kinds of things that people actually need to function in the real world."

The idea is that they pretty much break you down to fix you. They use enhanced interrogation tactics, AKA torture, which consists of food deprivation, sleep deprivation, isolation, public humiliation, repeated attacks, and basically keeping the person busy 24/7 while exhausted, hungry, and socially vulnerable. This will break them down. And the idea is, of course, that they will then build you back up and “fix you,” but nobody actually knows how to do that.

It’s pretty much destruction, then, at that point.

Yeah. They want to “remold” you in this model of what they think a perfect child should be, which is obedient. It attacks critical thinking, it attacks your sense of self, it attacks all kinds of things that people actually need to function in the real world.

Would you say that the staff who watch over these children are often qualified in the fields of medicine, counseling, education or drug rehabilitation?

No, most of the time these programs are carried out by people whose only qualification is either that they’ve been through it themselves and think that it’s a good idea, or they were hired at minimum wage because they needed a job. The research shows very clearly that this stuff is harmful at worst and ineffective at best. Professionals know this and are trained not to do this. That doesn’t mean that there aren't some professionals who still engage in it, unfortunately, but the vast majority of the staff in troubled teen programs have no qualifications whatsoever. Oftentimes, they don’t even have a high school degree.

Could you describe to me some techniques that are employed by the staff in order to facilitate this behavior modification?

Things like yelling, screaming, beating people, making people stay in stressful positions for long periods of time, making them do incredible amounts of exercise, or making them listen to really, really boring self help tapes over and over again. They control the environment completely to make sure that the kids don’t develop solidarity with each other. In order to advance in the program, kids have to attack each other and show how compliant they are.

There has been a lot of speculation about the seminars that a lot of these programs facilitate. Some say that it could be categorized as brainwashing; what do you have to say about that?

The word “brainwashing” is annoyingly controversial. I think that they are exactly the same techniques that are used by cults, and they are exactly the same techniques that the CIA mentions in its manual about how to break people. Whether you want to call that “brainwashing” can turn into a game of semantics. The basic thing is that if you want to create compliant behavior and false confessions, these techniques are a very good way of doing that. When you apply this type of pressure to people, they are going to tell you what they think you want to hear, and that and the truth are often not the same thing.

I am familiar with WWASPS; what other entities are there that still run programs?

Aspen Education has a number of wilderness programs and so-called “emotional growth” boarding schools that use a lot of these problematic techniques. I think the economic collapse almost killed WWASPS because people couldn’t mortgage their houses anymore to pay for them. The crash definitely reduced the number of programs, but as the economy is recovering, so are some of these programs, so there is definitely still a concern. I also think the efforts of survivor groups and journalists who've put the information out there have made it harder to recruit people into these programs because they are not viewed as positively as they used to be.

That was sort of a guesstimate based on what I could find. Because the programs are not regulated, it is very hard to know. It also depends on how you define a tough love program. There are some legitimate drug rehabs and psychiatric hospitals that unfortunately use some of these tactics. I would say 10,000-20,000 is probably be a good figure, but then the other question becomes, do you talk about the kids in the juvenile justice system who are often subjected to these kinds of things? If you’re including that large of a group, then I would say that number is getting up to 100,000. The GAO [The Government Accountability Office] did an investigation and they came up with a 100,000 figure, but again, I don’t know, and they weren’t sure, either. That may have been the case before the economy crash.

It’s pretty undocumented; they can shuffle a kid from facility to facility without even letting the parents know. It’s insane.

It’s a moving target. To me, a kid should not be able to be locked down in a facility without that facility being seriously regulated. The idea that you can call a place a boarding school and then prevent people from walking out is something that should not be allowed.

"If you have a situation where a program sees its patients as lying, manipulative, scummy people, then health complaints are going to be ignored, and that makes it dangerous. The relationship between a parent and child can be irrevocably damaged if a child gets harmed and you don’t believe them."

From your own research, are there any common disorders or feelings that the children or teens often face upon leaving a program like this?

Well, PTSD and depression seem to be pretty common. It is impossible to know how many of them went in [with those conditions] because, unfortunately, people often get sent for PTSD and depression. From talking to the kids that I’ve talked to and doing the research that I’ve done, [I’ve found that] a lot of people tend to be very, very compliant for about six months afterwards and then engage in behaviors that are far more extreme than they did before they were in the program. So let’s say they were smoking pot; now they might be trying painkillers, heroin, or cocaine. If they were slightly depressed, now they are severely depressed. There are some kids who were violent beforehand who have became worse. Fortunately, children and teens are resilient, but that doesn’t absolve the staff of responsibility for creating these severely traumatic environments.

What are some red flags for parents to be wary of when in search of a residential treatment facility for their child?

A big red flag is advertising for being able to treat anything. Another is not letting parents have contact with their children, and telling them in advance, “Oh, your kids going to give you bizzare reports of abuse; don’t believe them.” If you have a situation where a program sees its patients as lying, manipulative, scummy people, then health complaints are going to be ignored, and that makes it dangerous. The relationship between a parent and child can be irrevocably damaged if a child gets harmed and you don’t believe them. I have seen families split up permanently as a result of this, and it is tragic. How do you regain trust after that?

“Yes, your kid may be a pain in the butt and might be lying to you about their drug use, but the way to deal with that is not to write them off as a horrible person and treat them without any kind of respect.”

The idea of a “troubled teen program” itself is a problem. There is no such diagnosis as “troubled teen." If your teenager is having behavioral or mental health problems, the best thing to do is to get an independent psychiatric evaluation from somebody who isn’t affiliated with anything, except perhaps a university. If your child has a mental illness, they should get treatment that is based on the evidence of what works for that mental illness. If your child has an addiction, they should get treatment based on the best evidence for addiction treatment. If they have both, they need treatment for both. If they are simply defiant, family therapy and some “looking at your own parenting” may be advised.

Most mental health experts now say that the more care that can be given in the community, the better it is for everybody. Not only is that cheaper, but your kid is going to have to be out in the real world eventually. Yes, if a child is acutely mentally ill, suicidal, or violent, they may need an inpatient program in order to be stabilized. That’s really the only use for residential: getting medication stabilized and adjusted. It’s for people with severe addictions where we are talking about shooting up everyday, or for people who have been in thirty different foster homes and can’t function in the outside world. That’s not the usual case when a parent is looking for help with their child.

It really comes down to how you frame the problem. If you were having marital problems, you wouldn’t send your wife to a boot camp. You don’t fix a relationship by sending one person away to be “fixed.” Parents often are afraid to seek help because they are afraid that they are going to be seen as bad parents. The bottom line for a lot of these mental illnesses is that the parent didn’t cause it, but the support that is needed will involve some different parenting. Yes, your kid may be a pain in the butt and might be lying to you about their drug use, but the way to deal with that is not to write them off as a horrible person and treat them without any kind of respect.