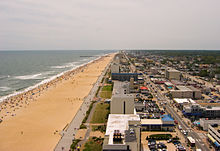 Virginia Beach is an ethnically diverse city of 450,980 people. The cultural mix and diversity of the city make for a very vibrant community and potential drug market.

Areas surrounding Virginia Beach are rural in nature, which makes the entire region prone to drugs such as marijuana, which can be grown without others knowing or meth which can be cooked in out-of-the-way hidden labs.

Virginia Beach’s well-developed transportation network is ideal for illicit drug movement within the city. Interstate 95 is the major route that is often used to transports drugs out of Virginia Beach as it connects to all the major cities in the state. Police have discovered rental vehicles and commercial vehicles being used as part of the transportation of drugs into the city and throughout the state during their Operation Pipeline initiative.

The years between 1995 and 1999 saw a major shift in the number of people who got admitted into rehab for drug-related problems in Virginia Beach. The results of the decline can be seen in the following table, which was put together by the Virginia Department of Mental Health, Mental Retardation, and Substance Abuse Services.

More recent statistics show that in 2009:

Virginia Beach’s rate of drug abuse is higher than the national average of 7.33%. Virginia Beach’s rate of drug abuse stood at 8.02% in 2015. This data is based on a survey that was carried out by the National Survey on Drug Use and Health where those being interviewed had to answer a question, which asked if they had abused a dangerous drug in the month prior to the survey.

Drug possession and use in Virginia Beach is dealt with ruthlessly in the city. The city had 45% of all its federal sentences being linked to drugs, either drug possession, transportation, or use in the year 2000. On a national scale, only 40% of federal cases had to do with drugs and drug-related issues. Of those federal cases, 51% of them were related to crack cocaine, which was statistically higher than the national average of 21%. These cases saw close to one-quarter of people who were sent to prison in 1998 were incarcerated for drug-related crimes.

Crimes associated with drugs in Virginia Beach are common. In 1995, 28,926 people were arrested in connection to the selling and/or possession of dangerous drugs. By 1998, the number had risen by almost 2,000 people to 30,348. The following two years did, however, show a decrease in the number of arrests, with 25,577 people being arrested in 1999, and just 23,335 people getting incarcerated in the year 2000.

Substance Abuse and Its Cost on Virginia Beach Residents

Substance abuse is costly for everyone in the community. It isn’t a problem that affects just the abusers of these drugs, but it also affects the common taxpayer whose tax money is used to provide treatments for such people. In 1998, the state of Virginia spent an estimated $1.8 million on substance abuse related issues. This money comes from taxpayers pockets, and in 1998 it would have cost each resident up to $267 per annum.

Drugs are a scourge in the city and the state because money that could be used to help develop the city is instead channeled to such efforts. In fact, as much as 12% of the state budget is allocated to help fight the war against drugs in the different cities of Virginia.

In Virginia Beach, there were 35 deaths directly linked to heroin in 2015 (3 times more than in 2014). There were also 131 overdoses, more than double in 2014. Rehabs in the city are pushing a lot of programs to help people so that there aren’t any more fatalities. Currently, Virginia Beach has 11 drug treatment facilities to cater to the growing numbers of drug addicts.

The city of Virginia Beach is actively involved in promoting the education of children in schools towards the dangers of drugs. The city also supports government initiatives such as the $25 million antidrug legislation by the Office of the Governor that aims to strengthen treatment and prevention programs across Virginia Beach and the rest of the state.