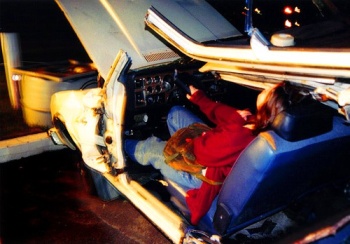 In 1997, following a high-profile hit-and-run incident in which a repeat DUI offender killed a young mother, Washington state toughened its drunk driving laws. More than a decade later, legislators in Olympia are still fighting to keep our roads safe.

Within a span of ten days in the early spring of 2013, the Seattle area saw three fatalities in two separate automobile accidents caused by drunk drivers. On the afternoon of Monday, March 25, Mark Mullan struck and killed retired schoolteachers Dennis and Judy Schulte and seriously injured the Schultes’ daughter-in-law, Karina Ulriksen-Schulte, as well as their 10-day old grandson, Elias. A little more than a week later, on the morning of April 4, Michael Anthony Robertson was driving the wrong way on Highway 520 and collided head-on with Morgan Fick Williams, who was on her way to work in Bellevue. Before the accidents, both Robertson and Mullan were awaiting decisions in pending DUI cases in Pierce and Snohomish counties respectively. The tragedies served as a reminder to concerned citizens and lawmakers alike that the fight against impaired driving is far from over.

In 1997, the well-publicized hit-and-run death of Mary Johnsen, a 38-year old mother of two, at the hands of repeat DUI offender Susan Lynn West spurred the Washington state legislature to reform drunk-driving laws. At the time of her arrest, West’s blood-alcohol level was .34, more than three times the legal limit. Since West had several previous drunk-driving offenses on her record, including a 1985 conviction in Seattle and two deferred prosecutions, King County Superior Court Judge Larry Jordan sentenced her to nine years in prison, an extraordinary penalty at that time.

The Mary Johnsen Act required that first-time offenders with a blood-alcohol level of .15 or higher, along with all repeat offenders, have ignition interlock devices installed in their vehicles. Another law passed in the wake of Johnsen’s death lowered the legal limit from .10 to .08. In 2006, new legislation changed a fifth DUI conviction in 10 years from a misdemeanor to a felony. That same year, Susan Lynn West was again cited for driving under the influence, this time in Bellevue.

West had been granted an early release in 2003. When the Bellevue patrol officer pulled her over, he discovered that her license had been suspended since 1997 for vehicular homicide. At the station, the convicted felon refused to submit to a Breathalyzer test and had to lean on officers to keep her balance. Because the law making a fifth DUI a felony wouldn’t go into effect until the following year, West was sentenced to a maximum of one year in jail for her latest offense. As with the cases of Mark Mullan and Michael Anthony Robertson, the justice system failed to prevent West from getting behind the wheel drunk and endangering the lives of innocent people.

Though Washington’s DUI laws are among the most stringent in the country, lawmakers have been thus far unable to significantly reduce the role that drunk driving plays in traffic accidents. According to the Department of Transportation, in 2011 alcohol figured in 37.4% of fatal crashes and 6.2% of all traffic collisions. The stats from 2011 more or less matched those of the previous nine calendar years. The problem can in part be traced back to repeat offenders like Mark Mullan, Michael Anthony Robertson, and Susan Lynn West.

An analysis performed by The Seattle Times revealed that individuals with multiple drunk-driving arrests accounted for 38 percent of the nearly 600,000 DUI-related cases in between 1998 and 2012. Within this group, 1,677 people had five or more charges brought against them.

The state seems to be at a loss as to how to keep off the road those who, consequences be damned, habitually drink and drive. Since 2004, the state has mandated that all DUI offenders, first-time or otherwise, have ignition interlock devices installed in their vehicles. With two DUI arrests in 2012 alone, Mark Mullan was not supposed to have been driving at all, let alone without a court-ordered ignition device.

The state legislature’s Impaired Driving Working Group met on April 9 to hash out a proposal for more changes to DUI legislation. The ideas discussed included making a third DUI conviction in 10 years a felony, instituting lifetime driving bans, and mandating ignition interlock devices for all DUI arrests, not just convictions. This last suggestion would have saved the lives of all three victims in the recent drunk-driving related crashes, as the drivers had pending DUI cases. Making a third DUI in 10 years a felony may not be economically practical because it would require the state to build a new prison for all the expected convicts — but do these potential costs outweigh the trauma that victims and their families have endured?

If individuals with multiple drunk-driving arrests account for a disproportionate amount of the new cases each year, then it would follow that these repeat offenders are disproportionately responsible for the number of deaths in crashes related to DUIs. Even a single DUI conviction is potentially indicative of a drinking problem.

Over the course of a period during which he racked up three DUI convictions and two arrests and lost his job, his wife and his family, Mark Mullan simply could not help himself from drinking and using drugs. In the case of Susan Lynn West, neither the guilt stemming from taking another’s life nor six years spent in prison stopped her from getting behind the wheel while inebriated. The Washington state legislature should persist in its campaign to restrict the driving privileges of people like West and Mullan. But the roads will not be safe until society develops a more comprehensive plan for dealing with substance abuse and addiction.