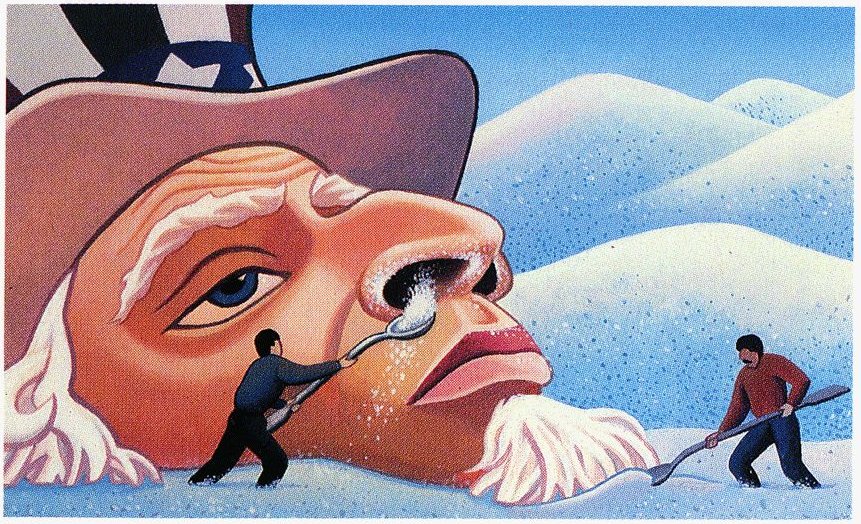 Though it was originally used as the active ingredient in health tonics and elixirs, it was not until the 1950s that cocaine became an illicit drug in the United States. Due to the dramatic influx of cocaine during that period as well as the consistent decline in street price, the market for cocaine in the United States increased tremendously throughout the 1970s and 1980s. The substance’s criminalization ignited the explosion of the Colombian drug cartels of the 1980s.

The Rise of Colombian Cartels

Since the 1970s, Colombia has harbored some of the most violent and sophisticated drug trafficking organizations in the world. What started as a small-scale operation of exporting slight amounts in suitcases eventually flourished into a multi-national empire with an estimated 22 million users in the US by the mid-80s. In 1982, the drug made up 30 percent of all Colombian exports, surpassing coffee.

With growing success in smuggling, many Colombian drug lords began buying up vast quantities of land in order to launder drug money and gain social status amongst the country’s elite. By the late 1980s, drug traffickers became the largest landholders in Colombia and wielded tremendous political clout as profits grew immensely. Some of the most notorious, elite, and violent cartels came to power during this period, including the Medellin’s, the Cali’s and the Norte del Valle cartel.

The infamous Pablo Escobar led one of the most ruthless cartel divisions within the city of Medellin, Colombia throughout the 1970s and 1980s and destroyed anyone who interfered with his cocaine operations. Escobar, along with Rodriguez Gacha and the Ochoa brothers (Jorge, Juan, and Fabio), collaborated with a young marijuana smuggler named Carlos Lehder. It was Lehder who convinced the cartel that they could fly cocaine in small, private airplanes directly into the United States instead of the tedious suitcase smuggling of the past.

This innovation of smuggling large quantities within a barely detectable airplane led to astounding profits, which the organization invested in more sophisticated production and transportation methods. During the climax of its existence, the cartel earned more than 60 million dollars daily, with some estimating the total profits some hundreds of billions of dollars.

Gaining enormous social control, the Medellin cartel recruited the Colombian military, wealthy cattle ranchers as well as its own members into a private army known as Muerte a Secuestradores (MAS) – translating literally “Death to Kidnappers.” The MAS death squads protected against guerrilla kidnappings, extortion, and theft through the killing of hundreds of community leaders and innocent bystanders alike that stood in their way of money, land, and power.

Increased success and power intensified the dark side of Escobar. As his sadistic violence amplified and became more commonplace, the cartel began to self-destruct. The Colombian police eventually gunned down Gacha, while the Ochoa brothers turned themselves into the government in the early 1990s in exchange for lenient prison terms. Ultimately, Escobar met his demise after the Colombian police and rival cartel- the Cali’s- hunt him down throughout a long series of battles.

The eventual collapse of the Medellin cartel prevailed in part due to the organization’s chief rival rooted in Cali, Colombia. Founded by the Rodriguez Orejuela brothers (Gilberto and Miguel) and Santacruz Londono, the Cali cartel behaved in a more quiet and less flashy manner, awarding the group the nickname “Cali’s Gentlemen.”

Smuggling cocaine became a sophisticated business, with the Cali cartel heads subtly investing their profits in legitimate businesses. Also, the ingenious group enforced terrorist techniques, keeping workers as independent criminal organizations reporting back to the leaders, with each group knowing very little about other employees. These smaller groups of workers were responsible for very specific aspects of the organization. By limiting communication between workers, chances of mutiny and leaked information to law enforcement minimized.

Another aspect of the Cali Cartel’s sophistication includes the hiring of internationally renowned lawyers to study the DEA and US prosecutors. Also employed were some of the world’s top engineers, who designed communication equipment that could not be bugged. As a result of the Cali’s dynamic and intricate methods of smuggling, the business flourished.

As Escobar became increasingly more violent, the Cali cartel retaliated, forming the People Against Pablo Escobar (PEPES). Along with staging attacks on Escobar’s homes, businesses and cronies, the PEPES began discreetly informing the Colombian police and the DEA with evidence and hideouts.

After Escobar’s fatality, the Colombian government focused their sights on the Calis and eventually arrested the group’s leaders arrested in the mid 1990s. Although the leaders remain behind bars, DEA agents believe the empire prevails with the men running the operation from their prison cells.

Following the disbanding of the Calis, the Norte del Valle Cartel (NDVC) emerged to become the wealthiest and most powerful Colombian drug trafficking organization of its day. The NDVC originated as a result of the broken trafficking networks left behind in the wake of the Cali cartel. Because their initial members consisted of former police officers, offering close ties to security and government forces, the group achieved incredible success; however, the NDVC became immersed in paranoia, treachery and division.

In its initial years, the organization’s leadership role passed through several different hands, including former policemen Orlando Henao Montoya and Wilber Varela. Due to several leaders’ indictments and suspected cooperation with the United States government, paranoia spread through the group like wildfire. Tensions erupted when main ally, Victor Patino Fomeque, met with DEA agents to negotiate a deal. Soon after, an all-out war began among the group when more leaders began snitching and retaliating against one another.

Wars persisted throughout the NDVC as more arrests were made, with five members, including the powerful leader Diego Montoya, captured in 2007. Then in 2008, authorities found Varela murdered in a hotel resort, presumably by his own men, who believed Varela would try taking over Montoya’s business. The arrest of Montoya and the murder of Varela closed a small chapter in Colombia’s cocaine war; however, officials believe remaining cartel members may fight for leadership of the organization.

The Future of Colombian Cartels

With the collapse of the Cali and Medellin cartels, the cocaine business in Colombia began to disintegrate. Younger leaders recognized that larger operations had been more prone to destruction by the US and Colombian authorities; subsequently, smaller, more controlled organizations have formed.

The maintained success of present-day cocaine operations in Colombia remains to be an explosive situation. Today, traffickers have enough money and power to build sophisticated smuggling equipment such as, high tech submarines. Currently, the DEA and the Colombian National police believe more than 300 drug smuggling organizations remain active. Because profits continue to be extremely high, cocaine shipments persist to every industrialized nation in the world, with the United States representing half of the world’s recreational cocaine use.