What Happens to Heroin Users When They Quit Cold Turkey? 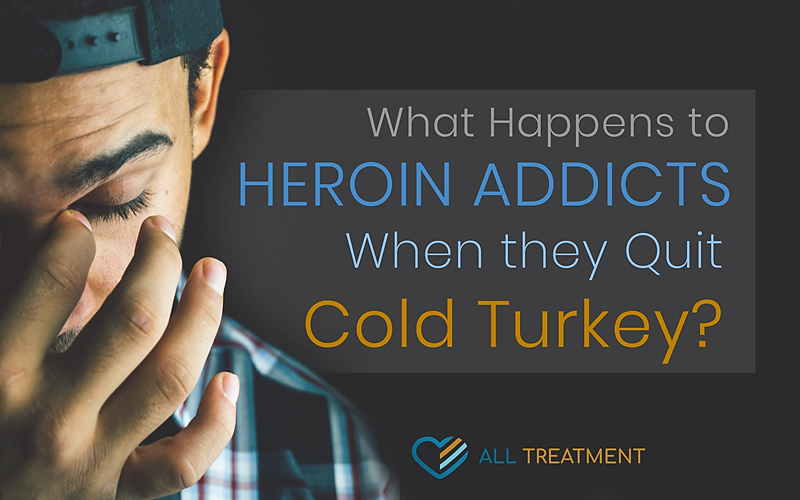 Prolonged and untreated substance abuse of any kind requires professional treatment for lasting abstinence; and heroin is hardly an exception. One of the most addictive illicit drugs currently known, heroin renders users chemically dependent after a very short time (often after one or two cycles of use). The American Society of Addiction Medicine (ASAM) reports that more than half a million Americans are currently addicted to heroin, while the National Institute on Drug Abuse (NIDA) puts annual heroin deaths at well over thirteen thousand. Many who succumb to fatal heroin overdoses have tried to quit “cold turkey”—that is, on their own without any treatment or professional help—but ultimately relapsed.

Unfortunately, most patients actually do try to quit cold turkey before they realize they need help, if they ever come to realize it at all. The Substance Abuse and Mental Health Services Administration (SAMHSA) reports that of the nearly twenty-five million people who actually need treatment for substance use disorders (SUD), including heroin addiction, a little more than ten percent actually receive it.

Why Do Heroin Users Who Quit Cold Turkey Relapse?

Simply put, the withdrawal process and cravings that accompany heroin withdrawal are, more often than not, too much for users to handle on their own. Heroin creates serious and lasting changes in neurobiology that make the brain and body need the drug in order to function. The relapse rates for heroin addiction are incredibly high, even when patients receive treatment; it’s even more difficult for heroin users to quit on their own. To make matters even worse, data from Psychology Today reveals that up to 45 percent of people with untreated SUD take their own lives. The longer heroin abuse continues untreated, the less likely it is that patients will be able to quit the drug cold turkey.

In most cases, heroin withdrawal symptoms will start to manifest after only a few hours from the last dose. As withdrawal continues, symptoms get worse and more intense, lasting for multiple days until they start to dissipate. Although each user will experience a different combination of symptoms, some of the most common physical and psychological effects of heroin withdrawal include:

When users attempt to quit heroin on their own, they are forced to deal with these symptoms and others without any means of relief or medical intervention; this often forces them to start using again.

Medical Detox is preferable to the cold-turkey method for a number of reasons. Heroin withdrawal is, by all accounts, a medical procedure and should be treated as such. Heroin detox provides patients a safe, sterile, and supportive environment staffed by medical experts who can provide symptom relief and help patients in the event of a medical emergency. Very often, users enter heroin withdrawal with an underlying medical condition that can be triggered or exacerbated by the withdrawal process. Medical detox offers regular monitoring, compassionate relief of symptoms, and invaluable insight as to the disease of addiction.

After detox, patients should enter behavioral rehab to address the root causes of their heroin abuse and develop everyday coping mechanisms to avoid relapse. Behavioral care for heroin addiction is just as important as addressing the acute medical issues associated with the disease. Heroin addiction treatment also offers patients the chance to explore medication-assisted treatment (MAT) options for long-term abstinence and relapse prevention.

What to Expect from Cold Turkey

Heroin users who endeavor to quit the drug cold turkey will invariably experience some level of psychic and psychological withdrawal that, more often than not, will be too overwhelming for them to manage. This incredibly arduous process is best managed with the help of experienced and qualified medical professionals. There are more resources than ever to help patients pay for detox, including private insurance plans, Medicaid, and more. There’s no reason why you or your loved one should have to go through this alone. While it’s imperative that heroin users cease use ASAP, they should also have a support system in place to help them through what is sure to be a physically and emotionally taxing ordeal.