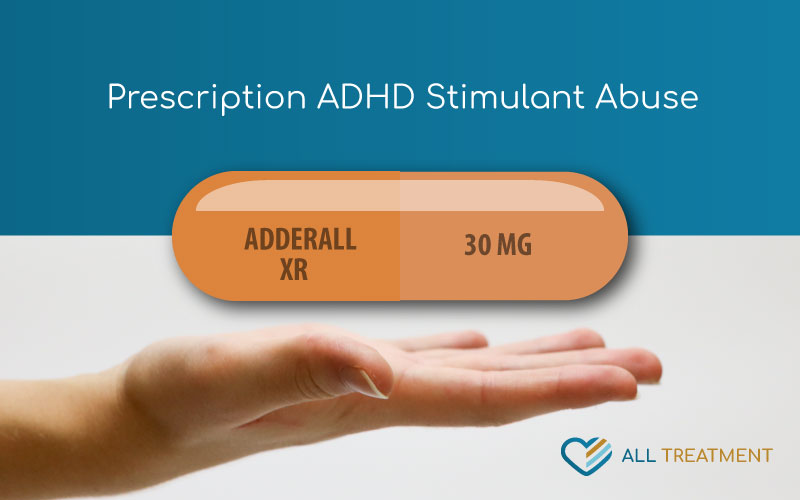 Prescription ADHD stimulant abuse remains an incredibly popular trend that affects teenagers, college students and adults. Although ADHD medications are legal as prescribed by a doctor, they prove to be highly addictive, widely abused and extremely risky.

Attention Deficit Hyperactivity Disorder (ADHD) is a brain disorder characterized by persistent hyperactivity, inattentiveness and impulsiveness. These symptoms tend to be more frequent and significantly more intense in those suffering with it compared to others of a similar developmental stage. ADHD can be diagnosed in pre-school years and even in adulthood, but the average age of diagnosis is 7.

It is normal for most children to experience symptoms of ADHD on occasion; however, those with true ADHD experience the symptoms all the time. Difficulty sustaining attention, an inability to sit still, being easily distracted, and talking excessively can cause problems in school, relationships, and later on in the workplace.

How do Prescription Stimulants Work?

Prescription stimulants for the treatment of ADHD increase dopamine levels in the brain. Dopamine is a neurotransmitter associated with pleasure, movement and attention. The effect of a prescribed stimulant is controlled in such a way that the release of dopamine is slow and steady, which paves the way for increased doses that eventually result in a therapeutic effect. This is the intended use for prescription ADHD stimulants. Unfortunately, however, these stimulants are often abused by those seeking a high.

Popular stimulants for ADHD treatment come in the form of psychotropic medications such as, Adderall and Ritalin. Because they stimulate the nervous system, and because they contain within them ingredients which can be habit forming, they have become popularly abused.

Prescription stimulants enable students to stay up all night studying; however, they have become perceived as a somewhat glamorous party drug, enabling the user to drink more for a longer period of time. Many people who abuse prescription stimulants believe they are safe alternatives to society’s perceived hardcore drugs, such as cocaine and meth. This is a dangerous, life-threatening belief that is widely inaccurate.

The Dangers of Adderall and Ritalin

The danger is that because both are prescription drugs, people imagine they are safe. It is important to understand that the uncontrolled use of either Adderall or Ritalin is very harmful. The drugs are closely related to amphetamines and exhibit all of the same hazardous properties that can lead to addiction and abuse. The DEA and International Narcotics Control Board rank Ritalin as a “Schedule II” drug, defined as a prescription drug with the highest possible potential for abuse.

Both Adderall and Ritalin abuse pose major health risks, such as:

Snorting Adderall or Ritalin amplifies the above risks as their potency is increased. Snorting allows drugs to enter the bloodstream faster and in a more concentrated way than swallowing does.

While prescription ADHD stimulants remain legal and serve their purpose, the over prescribing, misuse and abuse of these drugs is incredibly devastating. Prescription drugs, when not used for their intended purpose and administered in dangerously high doses, seriously affect a person’s health and can even be fatal.