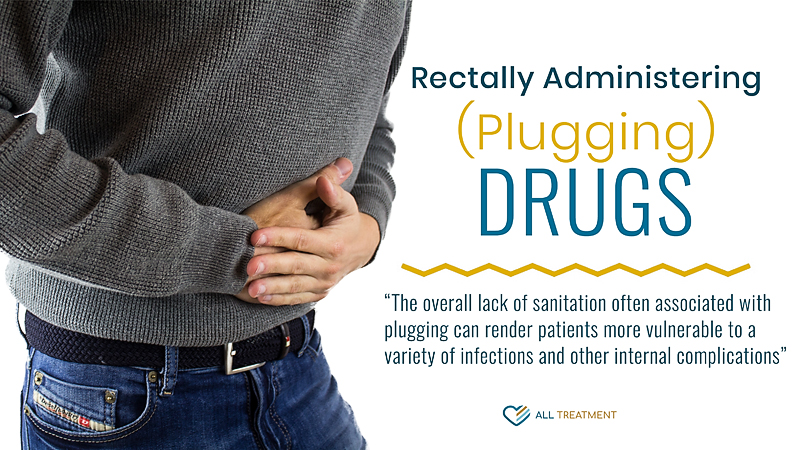 Drug addiction very quickly takes hold of our brain chemistry and central nervous system, making users do things that they often couldn’t imagine doing when they’re sober. The all-consuming compulsion to get high forces users to pursue their next fix to the detriment of practically anything else in their lives, including their physical health and safety, emotional well-being, careers, and personal relationships. One of the behaviors that most painfully exemplifies this tragic reality is a method of drug use called “plugging.” Plugging is the rectal administration of illicit substances and is an increasingly common method of intake among recreational drug users.

Why Do Recreational Drug Users Engage in Plugging?

Recreational drug users plug a variety of drugs, including but not limited to:

The exact method of plugging, or whether or not it’s even possible, will depend upon the physical form of the drug that the patient is currently using.

The anus is exponentially more absorbent than the mouth or nose, which means that patients feel the effects of drugs faster. Plugging drugs also allows the substances to bypass the initial biological safeguards against overdose, generally increasing its likelihood.

Some of the short-term and ongoing dangers of plugging include:

The overall lack of sanitation often associated with plugging can render patients more vulnerable to a variety of infections and other internal complications.

A Dangerous and Potentially Deadly Method of Use

Rectally administering drugs was meant for seriously or terminally ill patients who can’t receive necessary medications via other routes. Recreational users have co-opted this behavior and have rendered themselves more vulnerable to overdose, long-term health risks, and the spread of infection. Unlike medical patients, these users have little to no quality control and are often forced to use dirty equipment and unpredictable substances while plugging. If you or a loved one are suffering from drug addiction and have started plugging as a means of use, get the help you need today, before the effects of this behavior catch up with you and cause serious damage to your physical health and quality of life.