Marijuana Use Among Teens Declining Even as it is Legalized 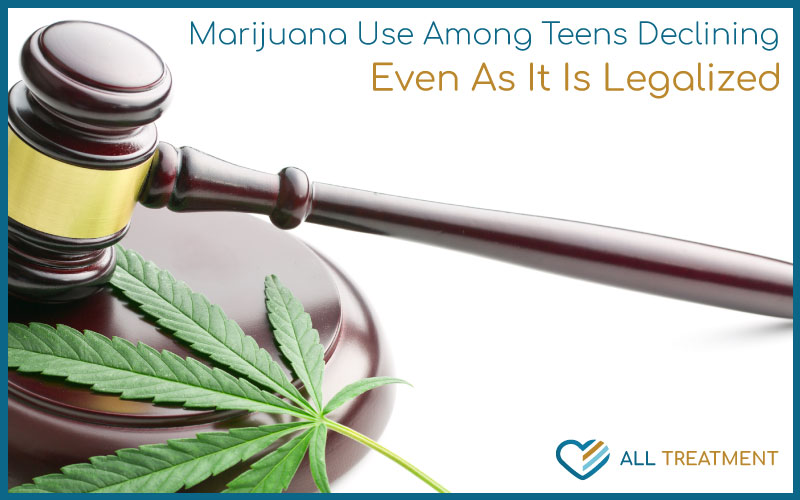 Marijuana Use Among Teens Declining Even as it is Legalized

Those against the legalization of marijuana either for medical or recreational use may not be pleased with the latest statistics on the use of marijuana. As the country moves toward legalization, it appears that fewer teenagers are using marijuana illegally. The federal government’s National Institute on Drug Abuse’s Monitoring the Future for 2014 survey shows that marijuana use among 8th, 10th and 12th graders has declined from 26% in 2013 to 24% in 2014.

How Reliable is the Survey?

The Monitoring the Future survey has been conducted for the past 40 years and it is considered the leading study of drug use among school age kids. The survey is given to 40,000 to 50,000 students in grades 8, 10 and 12 every year. It is given to students nationwide and asks teens about their use of legal and illegal drugs, cigarettes and alcohol.

Daily Use Declining Too

Along with the overall decline in marijuana use, the survey also showed that 8th and 10th graders say it is harder to get marijuana than it was last year. The daily use of pot has also declined among 12th graders from 6.5% in 2013 to 5.8% in 2014. Over half of the teens surveyed, 56%, said they would not try marijuana even if were legal for adults to use it.

Opponents of legalization efforts have said that they expected the use of marijuana to increase among young people if it were made legal. However, the surveys indicate that its use is declining even as more states are moving to make it legal to use for medical purposes and to use small amounts recreationally.

Along with marijuana, the survey also shows that the use of cigarettes and alcohol among teens continues to decline as well. Some experts think teens are heeding the messages against the use of these substances.