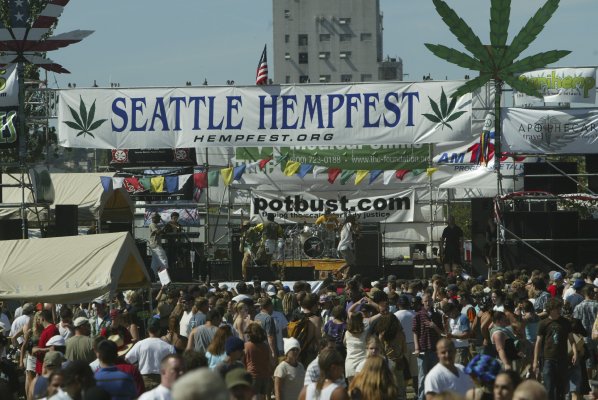 In its 22nd year, Hempfest will be unlike any of the others prior. In past years, the festival aimed to legalize marijuana at the state level, but now that I-502 was passed last November, the focus is on a much grander scale. Other than obviously celebrating Washington’s legalization, Hempfest 2013 is concentrating on reforming federal marijuana laws, where marijuana has remained a Schedule 1 drug since 1970 despite the fact that 20 states have legalized it for medical use.

“It’s going to be the most interesting Hempfest we’ve ever had because it’s going to be part victory celebration,” Seattle Hempfest Executive Director Vivian McPeak said in an article in The Columbian. “That said, we feel it’s very important to remind everyone that as long as it’s still a Schedule 1 drug under the Controlled Substances Act, it’s not legal anywhere. The job’s not done yet.”

In compliance with the state law and an ordinance passed in 2003 making marijuana enforcement the lowest law enforcement priority, the Seattle Police Department isn’t planning on issuing tickets for public consumption of marijuana at the event. Instead, their goal in attending the festival is to raise awareness about the current, and confusing, state law by passing out bags of Doritos. That’s right: the SPD knows that the way to a stoners’ mind is through the stomach, so they’ll be handing out 1,000 Doritos bags with information attached to a post on their website titled “Mariwhatnow? A Guide to a Legal Marijuana Use in Seattle.”

Rather than arresting marijuana users, the police will instead be passing out bags of Doritos.

“I think it’s going to be a lot of fun,” Sgt. Sean Whitcomb of the Seattle Police Department told The Stranger. “It’s meant to be ironic. The idea of police passing out Doritos at a festival that celebrates pot, we’re sure, is going to generate some buzz.”

However, they will be keeping a close eye on drivers under the influence, as well as those under the age of 21. McPeak says Hempfest Gut Check cards that “address various aspects of harm reduction” will be distributed as part of their other reform policy to end marijuana smoking by young adults.

With six stages featuring 117 musical acts and over 100 speakers, 400 food, hemp and cannabis themed vendors, and as many as 250,000 expected attendees all rolled into three days, the festival promises to be a fun time. In return, McPeak is only asking guests for a $10 donation so that the free tradition can continue. Also, please make sure to read the set of rules on the Hempfest website so you don’t end up getting your propane torch confiscated. Other than that, we look forward to seeing you there!