Dealing With A Daughter Suffering From Drug Addiction 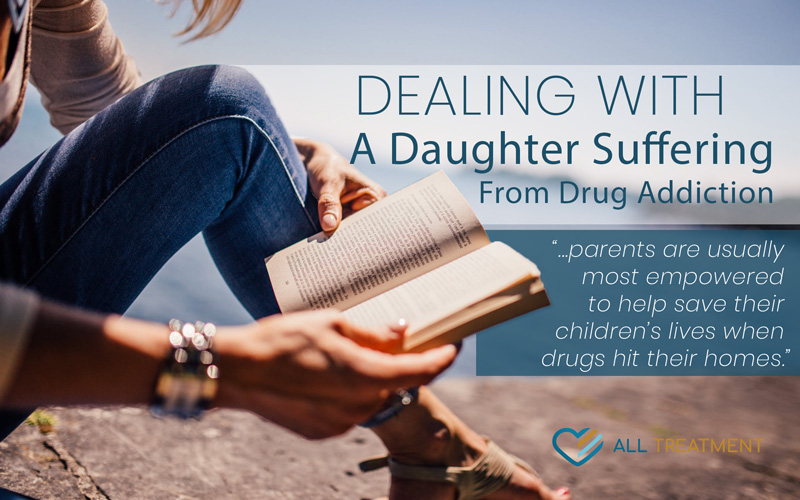 The Substance Abuse and Mental Health Services Administration (SAMHSA) reports that nearly sixteen million women use illicit drugs per year and that nearly five million misuse prescriptions. The Centers for Disease Control and Prevention (CDC) reports that every three minutes a woman goes to the ER for prescription misuse or abuse, primarily opioids and benzodiazepines (benzos). Data from the Partnership for Drug-Free Kids indicates that teenage girls are more vulnerable to drug abuse than teenage boys. At one point, each and every one of these women had parents, whether for their whole lives or a more abbreviated period, and most of them had parents who may have been able to guide them toward recovery from drug abuse and subsequent addiction. Dealing with a daughter suffering from drug addiction is never easy; however, parents are the ones who are usually most empowered to help save their children’s lives when drugs hit their homes.

Why Is My Daughter Addicted?

Understanding your daughter’s journey toward addiction is considerably easier when you understand the myriad common causes of substance abuse among women in general. This population faces a unique and distinct set of physiological and lifestyle factors that can significantly drive substance abuse. In addition to issues related to hormones, menstrual cycle, fertility, pregnancy, breastfeeding, and menopause that can impact women’s struggles with drug use.

Some of the primary factors that can increase substance abuse among women can include:

Signs Your Daughter Is Addicted

While the signs and symptoms of addiction are unique according to each individual user’s substance use history, some of the more common signs include:

If you notice these or other physical and behavioral changes in your daughter that you suspect might be related to drug use, it’s critical that your mobilize your resources to intervene and get her help.

What Can I Do?

Nobody wants to believe that addiction can ever infiltrate their household and family. The revelation can be so shocking that, when faced with it, parents are often rendered emotionally paralyzed to act in the best interests of their child.

The exact steps you take to identify and act upon your daughter’s drug addiction will be largely contingent upon the nature of your relationship (her history of lying, past arguments, whether you feel you can trust her, etc.

It’s natural to want to respect your daughter’s privacy whether she’s a child or an adult, but saving her life from addiction is more important. It might be necessary to deploy seemingly invasive practices such as going through her belongings to look for drugs or related paraphernalia or to ask frequent questions about her whereabouts. If you suspect there’s a problem, it’s likely that some signal has nurtured that instinct. When you find that your daughter does indeed have a drug problem, there are multiple courses of action that may be at your disposal:

Your daughter’s drug addiction may not be your fault, but it is now your responsibility to help. Pretending it doesn’t exist is going to do anything but exacerbate the issue and create further emotional distance between you and her. By starting a frank and honest dialogue and doing whatever is necessary to intervene in your daughter’s drug use, you’re sending her a clear message that you’re a strong, loving, and committed parent. She may not be able to see this immediately, but you need to do everything you can to ensure she comes out the other end of her substance use as the healthy and productive young woman you’ve raised her to be.